Let me begin by saying that I actually do not like writing about this topic for the simple reason that the minds of far too many people – including otherwise good Christians – so often turn to mush whenever talk about capital punishment is raised.

If there is any topic that will cause people to simply emote and offer kneejerk reactions, instead of critical reflection, it is this one. Instead of listening to one shred of evidence or fact (and I will usually offer heaps of evidence and facts on this subject), these people will just go into zombie mode and emote angrily.

So I realise I am asking for trouble here. And I might as well warn those who will just emote and not deal with the arguments that any comments they send in here will simply go straight into the rubbish bin. But for those actually able to employ rational thought instead of just relying on feelings, let me speak to this issue a bit more.

I have of course covered the death penalty in detail in numerous articles already – twenty to be exact, with this being number twenty-one. See here for these pieces: billmuehlenberg.com/category/ethics/capital-punishment/ 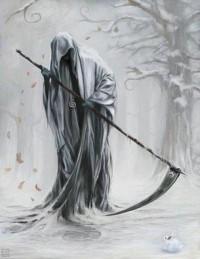 So I have covered this topic in great detail already. But let me deal with one very common objection to the death penalty. I hear it all the time, and since I heard it yet again today, it might be worth offering a fuller reply. The objection is this: we can’t have capital punishment because that will take away from the opportunity of sinners to hear the gospel and repent.

The remark I just read on a website about this went as follows: “The only argument I can make is this: the ultimate goal in this life is earnest and sincere repentance and recognition of Christ’s Lordship. And by keeping a prisoner alive for hope that they will reach this point, it is worth it.”

That is telling: that is the only argument this person could come up with, and yet he thinks it is some sort of knockout argument. It is nothing of the sort of course. Indeed, it is as silly as it is weak. In fact, this commonly offered objection really has no biblical merit whatsoever.

The idea that we should never do anything to cut a person’s life short so that he might have more chances to hear the gospel and turn his life around is really rather silly when you just think about it for a minute. If this were true, you then would have to argue that God is immoral for allowing us all to die so relatively young.

It is bad enough when God allows folks to die in infancy, or adolescence, or as a young adult. But even allowing people to die after living fourscore and ten would make God rather evil if the main game in town is to repent, no matter how long that might take.

Why does God not allow us all to live to be 500 or 1000? In fact, why not allow us to live till we are all 10,000 years old? After all, we would then have even more chances to repent. Sorry, but this is the thinking of secular humanism, not biblical Christianity. As I have written elsewhere:

“Justice, it seems for these folks, is to allow any and every evil to take place, because some of these evil doers might eventually see the light. So the bad guys here were clearly the Allies who sought to stop Hitler and liberate Europe. They were obviously frustrating God’s intent to save Hitler and all the other malicious Nazi thugs.”

I was even asked by one of these pacifists, “who are you to decide that bin Laden had had enough of a chance to repent?” I replied: I am not in a position to decide anything along these lines. Only God is. He alone knows when a person has had enough opportunity to know of him, repent, and be saved.

Indeed, just take it to its logical conclusion: if we want everyone to have as many chances to hear the gospel, and for the longest possible amount of time, then we should be doing everything we can to ensure that people live as long as possible.
Any scientific scheme to extend our lifespan should be welcomed unconditionally, and anything which might reduce it should be resisted at all costs. And by this reasoning, all killing whatsoever should be resisted, since it lessens the time a person has to hear the gospel.
Thus we were quite wrong to kill Hitler, or Saddam, or bin Laden. If an armed rapist breaks into our home, it would be wrong to try to resist him – at least by killing him – because that would shorten his time to hear the good news and repent.

God appoints the times and seasons of men. He gives life and he takes it away. And part of the way that he governs in this fallen world is to declare that those who forfeit their right to life shall in fact lose it. He instituted the death penalty and the use of the sword for this very reason.

The fact that God is in control of our times is stated throughout Scripture. For example see just a few such passages:

-Job 14:1-6 Man who is born of a woman is few of days and full of trouble. He comes out like a flower and withers; he flees like a shadow and continues not. And do you open your eyes on such a one and bring me into judgment with you? Who can bring a clean thing out of an unclean? There is not one. Since his days are determined, and the number of his months is with you, and you have appointed his limits that he cannot pass.

-Psalm 139:16 Your eyes saw my unformed substance; in your book were written, every one of them, the days that were formed for me, when as yet there was none of them.

-Matthew 10:29-31 Are not two sparrows sold for a penny? And not one of them will fall to the ground apart from your Father. But even the hairs of your head are all numbered. Fear not, therefore; you are of more value than many sparrows.

Of course these sorts of verses are not the only ones we would consider in this matter, but they are important additions to any biblical discussion about it. God clearly numbers our days, and he knows our end from our beginning. He is in control.

And the truth is, in various American states at least, the time between when a man is sentenced to death, and when he is finally executed (if he is at all) can easily be a matter of many years, if not decades, with various appeals processes and so on involved.

Thus no one is sentenced to death and then killed immediately in those Western nations that still might have the death penalty. There is a very large period of time, often many years, and that certainly gives a man plenty of time to think, to reflect, and to get right with God and prepare to meet his Maker.

When God ordained – with full justice and righteousness – the death penalty for murder and similar crimes, he had every right to do so. If people think God is immoral for doing this, they really need to deal with God about it. What they are really doing is putting God in the dock and saying they are in a far better position than him to run the universe, and to make moral judgments.

God ordained the state, he ordained the death penalty, and he ordained the days of our lives. He is God. He is sovereign. He is fully right to do all these things. It is time we let God be God in these areas, and not insist that we can somehow do a better job of governing the universe than he does.

8 Replies to “The Death Penalty, Long Life, and Repentance”