OK, my title is likely to be something resulting in relatively few google search result hits. In fact, I just tried it, and this is what I got: “No results found for ‘Apologetics and Modelling’.” Of course it is not every day that a top international fashion model becomes a Christian evangelist and apologist.

But such creatures do exist. I recently learned of a former model now working for Ravi Zacharias International Ministries (RZIM) and thought that her story was well worth sharing. I refer to Indonesian Tracy Trinita. This is how she is written up on the RZIM website: 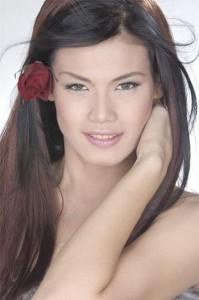 Tracy Trinita is an itinerant speaker and apologist for RZIM. Originally from Bali, Indonesia, she was the country’s first-ever supermodel modeling for top designers such as Yves Saint Laurent, Jean Paul Gautier, Kenzo, Benetton, among others in Paris, Milan, New York and other major capitals around the world.
A life of glamor, fame and glory never really filled the gnawing emptiness she felt and in 2002, she received Jesus as her Savior and Lord. She studied theology and apologetics at RZIM’s Oxford Centre for Christian Apologetics (OCCA) and at Wycliffe Hall, Oxford. Since then, she has served as an apologist and teacher at Yayasan Pengembangan Apologetika Indonesia (YPAI) and at International English Service (IES) Church in Jakarta.
Her work at RZIM focuses on the fashion, arts, media and entertainment industries as she hopes to bring the message of Christ’s saving grace to the people with whom she once worked.

On her blogspot we learn more details about her past modelling life and her change of direction:

At the age of fourteen, Tracy Trinita was the first Indonesian model ever won the prestige Elite Model Look International competition in 1995. Prior to that, she was named the Cover Girl of the Year from Mode magazine, Indonesia. That was the start of her international modeling career that brought her across the globe: New York, Paris, Milan, Spain and Sydney to name the few. She appeared regularly in New York and Paris fashion week for prestigious labels such as Yves Saint Laurent, Jean Paul Gautier, Kenzo and more. Her remarkable global campaign for United Colour of Benetton was one of the highlight of her youth. In 2001, she returned home after 6 years living abroad. Easily she found her way into Indonesia’s entertainment industry, her career moved on from silver screen and television series actress to screen writer and music promoter while maintaining her little beach fashion shop in Bali.
Grew up in Bali with mixed religion background yet in 2001, she first encountered Christian faith that immediately touched both her heart and mind. In 2002, she accepted Jesus Christ as her Savior and King. Since then, she has been involved in ministry including mission trip to the jungles of Kalimantan. In 2006 by God’s grace, she received a full scholarship to study at Oxford Christian Centre for Apologetics, Oxford University, UK. Finished with her postgraduate work, she continued her study in Christian Theology in Wycliffe Hall, Oxford (2007- 2009).
Tracy’s passion is to share her knowledge and faith by equipping others with the truth of the word of God and renewing minds through apologetics. Borrowing her favorite apologist Ravi Zacharias’ quote, she firmly strives to “make believer think, and the thinker believe”. Complementing an enlightened mind, she also believes that one has to be the salt and light of the world through all the talents and capacity God entrusted in them.

And in another article she speaks further about her conversion to Christ:

Everything changed when her agent asked her to travel from New York to Paris for a modelling job. Upon arriving in the city, she met a girl who invited her to church. Trinita went to a service where she says, “God bridged the heart and the mind and truly comforted my heart; I sensed the love like nothing I have ever felt before.”
She was convinced by the reality of her encounter with God. “If Jesus was not real, then how could I have felt so amazingly loved? I know fake happiness – that is what the world of modelling relies on – and this happiness was true. It was out of my power and God changed me.”
Trinita felt called to be a light in the sometimes dark world of modelling, and to show Jesus to other girls in the industry. “I focused on doing my best at work, but for the first time I realised that other models were not the enemy or a threat, but just people like me doing a job,” she says.
Other models were intrigued, and sometimes mocked her decisions not to do certain shoots based on her faith. However, Trinita says, “The things they made fun of were the very things that they were attracted to and questioned me about; they were intrigued by my faith and how I was different.”
She shared with Christian Today an example of such an encounter. “I was living in New York, it was a Sunday evening and I had just got back from church. My flatmates had just returned from a big party. They asked me where I’d been, and I was so excited about the sermon I’d just heard, I told them all about it. One of the girls was so excited about the message of Jesus, that she came to church with me next week and became a believer.
“You don’t have to be smart, but trust God and let the Spirit guide you. It is in Christ’s power, not our own, that people find God because he is the one that calls people,” she added.

I must admit to not knowing very much about modelling, but I do know a bit about apologetics. Just in case some readers still do not know what it is exactly, let me finish this article with a brief description of what it entails. Simply put, apologetics is about the defence of the faith.

It is about giving honest answers to honest questions. Positively, it explains what the Christian faith is all about, making the case for God and biblical truth. Negatively, it deals with objections, obstacles and barriers to faith. It seeks to clear up fuzzy thinking and false notions of what the faith is about.

It is actually a sort of pre-evangelism. Before people can make a personal decision for Christ, they must know a bit about who this Christ is, who God is, what he expects of us, why we are alienated from him, and so on. So it clears the ground of faulty understanding and wrong views, and makes the presentation of the gospel much more effective.

If a person knows he is a lost sinner in need of a Saviour, then of course the believer gives him the gospel message without delay. We find this clearly illustrated in the story of the Philippians jailer as recorded in Acts 16:30. When someone asks, “Sirs, what must I do to be saved?,” you give them the gospel – pronto!

But not every unbeliever is at this place, and they need some bridges to be built, some common ground to be found. Paul at Mars Hill in Athens does this very thing, as found in Acts 17:15-33. He seeks to relate to the pagans there where they are at, quoting their own poets and philosophers.

He is seeking to find common ground with his listeners. He is seeking to build bridges with the Athenians. In both these situations that Paul was involved in, notice that the message of the gospel did not change: they remained the same. But the method Paul used did change as he dealt with different audiences.

So Paul was involved in apologetics at the Areopagus, as we see him doing elsewhere in the book of Acts. Both Paul and Tracy did just what Peter urges us all to do, as he writes in 1 Peter 3:15: “be always ready to give an answer (a defense) for the hope that lies within you”.

That word ‘answer’ or ‘defence’ here comes from the Greek word apologia, where we get our English word ‘apologetics’ from. We are all called to defend the faith, to give real answers to real questions, and to prepare the ground so that the gospel message might best be proclaimed and utilised.

The fact that a supermodel can become an effective and Christ-honouring Christian apologist means that anyone can. As she said, “You don’t have to be smart, but trust God and let the Spirit guide you.” One need not be super-intelligent to be an apologist.

All believers should know a bit about what they believe, and they should have a few non-Christian friends. That is really all you need to begin your work as a Christian apologist. Well done to Tracy Trinita for making this journey and for being a defender of Christian truth in a needy world.

May the Lord raise up and equip many more of us to do the same.

8 Replies to “Apologetics and Modelling”