I have come to the understanding that writing books on the militant homosexual assault on Christianity is a lost cause: as soon as your book is published it becomes instantly out of date. There are so many cases of the activists engaging in anti-Christian bigotry, that old technology like mere books just don’t cut it anymore.

I did release a book on this recently: Strained Relations. And as soon as it was published it was already getting dated. All around the Western world the homosexual activists are attacking Christians and seeking to use the heavy hand of the law to silence all dissent and criminalise all opposition.

The Western world, which was once the product of the Judeo-Christian worldview, is now the main breeding ground of this anti-Christian agenda. And Australia is well ensconced in this war against faith and freedom. Consider the latest attack on those who dare to resist the homosexual juggernaut.

A pro-marriage pamphlet put out by the Catholic Church is now the subject of a lawsuit by an angry transgender Green’s candidate. I have elsewhere discussed this helpful and well-researched booklet: billmuehlenberg.com/2015/07/26/standing-fast-for-faith-family-and-freedom/

One news report puts it this way regarding the lawsuit: 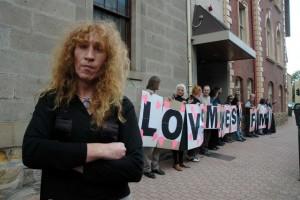 MICHAEL BRISSENDEN: A Tasmanian woman is taking the Catholic Archbishop of Hobart to the Anti-Discrimination Commission over a booklet about same sex marriage. The booklet, ‘Don’t Mess With Marriage’, was sent to Catholics around Australia earlier this year. In Tasmania it went out to churches and the parents of children at Catholic Schools. It makes it clear the Catholic Church opposes same sex marriage. And Martine Delaney who is making the complaint says some of the content breaches Tasmania’s Anti-Discrimination Act. Felicity Ogilvie reports from Hobart.

FELICITY OGILVIE: In the Booklet ‘Don’t Mess With Marriage’, the Catholic Church says marriage is a blessing from God; a holy, spiritual and heterosexual union between a man and a woman where children are born and raised. The church argues that since every child has a biological mother and father, messing with marriage is messing with kids. The booklet has infuriated Martine Delaney, a spokeswoman for the Tasmanian Gay and Lesbian Rights Group and the Greens candidate for the Federal seat of Franklin.

MARTINE DELANEY: It appears to be a whole lot of statements of Catholic belief but then it also makes quite bold and I think very questionable statements, which together as a cumulative message give you the idea that same sex attracted people can never have a relationship that is equal to a heterosexual marriage, that they can never be whole as people, that their children can never be complete as people.

FELICITY OGILVIE: The booklet also cautions that if marriage is redefined, supporters of traditional marriage will be characterised as bigots and could run foul of the law. But Ms Delaney says the booklet has already crossed a legal line.

MARTINE DELANEY: It’s actually in breach of Section 17 of the Tasmanian Anti-Discrimination Act, in that it’s insulting, it’s offensive, and it’s possibly for some same sex attracted people quite humiliating.

An earlier article discusses why the Church had issued the booklet:

The Catholic Church has responded to moves to legalise same-sex marriage in Australia with a letter which is being sent to parishes around Tasmania. The letter is titled “a pastoral letter from the Catholic Bishops of Australia to all Australians on the ‘same-sex marriage’ debate” and carries the slogan “don’t mess with marriage”. It was compiled by the national body the Australian Catholic Bishop’s conference and is not specific to Tasmania. The same booklet has been distributed to Catholic school children in Canberra….
A South Australian Bishop warned children of gay couples will see themselves as another Stolen Generation because they have been denied a mother and a father. Tasmanian Archbishop Julian Porteous said the letter was issued to help Catholics understand why the church was opposed to changing the legal definition of marriage.
“This Pastoral Letter is offered to parishioners in the hope that it will deepen their appreciation of the beauty and dignity of marriage and family life according to the plan of God,” he said in a statement issued on Wednesday evening. The small booklet begins with a section titled “respect for all” and then goes on to outline why marriage should be exclusively between a man and a woman.

Neil Foster, an evangelical Christian and Associate Professor of law at the University of Newcastle, has offered some legal background to this claim of discrimination. He writes, in part:

It seems hard to imagine that it was a surprise to parents sending their children to a Roman Catholic school that they would be receiving teaching on the church’s views on moral issues, especially on a matter of such great public interest in Australia at the moment. Nevertheless, a number of parental complaints were made when the booklets first came out. Complaints were made that the material was “discriminatory”. Yet, as the booklet itself points out:
Justice requires us to treat people fairly and therefore not to make arbitrary, groundless distinctions…if the union of a man and a woman is different from other unions – not the same as other unions – then justice demands that we treat that union accordingly. If marriage is an institution designed to support people of the opposite sex to be faithful to each other and to the children of their union it is not discrimination to reserve it to them.
The provision of the Tasmanian legislation being relied upon is essentially an “anti-vilification” law, presumably in its application to “sexual orientation” discrimination. It relevantly provides:
17 (1) A person must not engage in any conduct which offends, humiliates, intimidates, insults or ridicules another person on the basis of an attribute referred to in section 16..(c)… in circumstances in which a reasonable person, having regard to all the circumstances, would have anticipated that the other person would be offended, humiliated, intimidated, insulted or ridiculed.
I have written a lengthy paper analysing Australia’s anti-vilification laws as they relate to religion, and many of the comments I make there relate also to what we may call “sexual orientation vilification laws” such as s 17, as it is being used here. In particular all such laws raise serious issues as to how they protect the important value of free speech, while balancing this with the right of persons in protected categories not to be the subject of “hate speech”.
One of the cases I discussed in that paper was a decision from the Supreme Court of Canada, Saskatchewan (Human Rights Commission) v Whatcott, 2013 SCC 11 (27 Feb 2013), dealing with sexual orientation vilification. As I noted, in that decision the Supreme Court upheld a provincial law dealing with “hate speech”, but as part of its decision the Court struck down the sections of the law that targeted the mere causing of “offence”, as contrary to the Canadian Charter right of free speech. To be precise, the Court agreed that the prohibition on “exposing someone to hatred” was valid under the Canadian Charter of Rights and Freedoms, but ruled that the words “ridicules, belittles or otherwise affronts the dignity of” were invalid and should be struck out.

Unusually for Australian State Constitutions, the Tasmanian Constitution Act 1934 contains a religious freedom protection provision, in s 46:
(1) Freedom of conscience and the free profession and practice of religion are, subject to public order and morality, guaranteed to every citizen.
Sadly this provision is, so far as I am aware, untested in the courts. I am not even sure whether it should be read as over-riding “ordinary” Tasmanian legislation, as one would usually expect in a provision of a Constitution. However, it may provide another reason to suppose that the Tasmanian Parliament may not have intended, by enactment of s 17, to prohibit the free expression of the Roman Catholic Archbishop’s belief, which of course would be a part of his (or the church’s) “profession and practice of religion”.
If there is, as seems suggested at the moment, to be a plebiscite on the question of recognition of same sex marriage, it is to be hoped that respectful public debate can be carried out without a polite statement of one side of the case being “shut down” as offensive or insulting simply because it makes a case which some disagree with. In any event it seems likely that Australia’s Constitution protects robust political debate on these matters.

It remains to be seen how this Tasmanian legislation – and this particular lawsuit – will play themselves out. But what we do know full well is a raft of anti-discrimination, equal opportunity, and various vilification laws have been used all over the West to silence Christians and ensure that the homosexual agenda is vigorously carried out and promoted.

These are some of the biggest threats we now face regarding faith, freedom, and family. It is up to Christians and other concerned citizens to steadfastly resist many of these draconian laws and nefarious legislation, and stand up for their freedoms before we lose it all.

13 Replies to “Militants Sue the Church”