Imagine a government actually treating someone who cares about the most innocent and vulnerable members of society as a terrorist. Imagine refusing to allow such a person to even enter into your country to speak about the protection of unborn babies.

What sort of nation would act this savagely and bizarrely? North Korea? Cuba? No, it is in fact the Australian government which has just incomprehensibly revoked the visa of an American prolife speaker who was on board a plane coming here for a ten-day speaking tour. 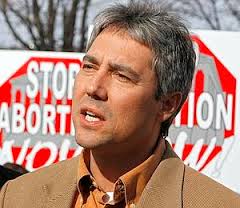 Troy Newman from Operation Rescue was en route to Australia in the US when his United Airlines flight was pulled right out from under his feet. He was told he could not complete his next leg of the flight from Denver to LA, and this because of an order from the Australian government!

One news item puts it this way:

Troy Newman is the head of anti-abortion organisation Operation Rescue and was due to speak in Melbourne, Sydney, Brisbane, Hobart and Cairns over the next fortnight at events run by the group Right To Life Australia. But in a statement, Immigration Minister Peter Dutton confirmed Mr Newman’s visa had been cancelled. “Mr Newman can appeal for a revocation of this decision and no further comment will be made during this appeal period,” Mr Dutton said.
In a Facebook post, Mr Newman expressed his disgust at the decision. “The Australian Government has revoked my visa in mid-flight,” he said. Mr Newman said he “was pulled off a plane in Denver” and told he could not travel to Los Angeles and then on to Melbourne.
The “pro-life” campaigner also posted a video of an awkward exchange with airport staff in Colorado. “Please pray for me, I’m stuck in Denver airport like a man without a country,” he said. The Operation Rescue website said Mr Newman had “booked another ticket on a different airline and will travel on to Los Angeles tonight” in the hope he can still fly to Melbourne.
In a statement, Right To Life Australia spokeswoman Mary Collier said: “We are all very upset that this has happened and are working furiously to turn it around.” Several Australian politicians, including Labor backbencher Terri Butler, had called for Mr Newman to be banned from entering the country.

He ended up on another flight and has now been detained in Melbourne:

American anti-abortion activist Troy Newman has been detained at Melbourne Airport, after travelling to Australia even though his visa had been cancelled. Mr Newman, who has questioned why doctors who abort babies are not executed, had his visa cancelled by the Immigration Department yesterday and was stopped from getting on a flight in Denver.
But the ABC understands he flew on a United Airlines flight, and a spokeswoman for Immigration Minister Peter Dutton said the airline now faces a fine for carriage of a person who does not hold a valid visa.” Since Mr Newman-Mariotti does not hold a visa, he is unable to enter Australia and remains in the presence of ABF (Australian Border Force) officials at the Melbourne Airport pending his removal,” the spokeswoman said.
Lawyers representing Newman said they had withdrawn a Federal Court bid launched this morning to allow him to enter the country, meaning he will likely be deported. Mr Newman is the head of anti-abortion organisation Operation Rescue and was due to speak at events run by the group Right to Life Australia around Australia.
He said the revocation of his visa yesterday was “based on a pile of lies, including the idea that I promote violence”. “My 25-year history of peaceful, prayerful action speaks for itself,” he said. “Please pray that we can get past immigration so the truth can be told throughout Australia.”

Obviously a few pro-baby killers made a stink about Newman to the government, and that was enough to actually get him banned. That is simply mind-boggling. Such is the inordinate and obscene power of political correctness and a handful of noisy and small minority activist groups.

Now freedom and democracy are being held ransom by a handful of those who champion baby killing and want everyone to submit to their deadly agenda. And the Australian government actually goes along with this. And bear in mind that the new Turnbull government is largely responsible for this.

The Christian Immigration Minister Scott Morrison was only just recently replaced by Peter Dutton and this may have had a bit to do with it. This is just some of the first fruit of the reign of leftist non-Christian Malcolm Turnbull. I cannot imagine this happening under an Abbott government.

Because I have been travelling the past two days I have not been able to monitor all this properly. So this is a sketchy initial report. I will provide more and fuller updates in the near future. In the meantime, we can certainly complain to the authorities here.

Contacting the Minister is a first step. You can call his office on 02 6277 7860. And I am told that Peter Dutton’s email address is this: minister@border.gov.au.

This is all the stuff of the Brave New World scenarios: evil is celebrated and promoted by the state while good is howled down and penalised by the state. May God save Australia.

16 Replies to “Treating Prolifers as Terrorists”