One cannot read the gospel accounts without noticing one very clear thing: wherever Jesus went, and whatever Jesus said and did, he brought division, he caused offense, and he created trouble – heaps of it. He always managed to get a reaction.

One cannot read the book of Acts without also noticing this to be the case – constantly, repeatedly, and invariably. Everywhere the disciples went they stirred up trouble and caused great controversy. Just about every single one of the 28 chapters of this book contains accounts of the early believers causing upheaval, provoking controversy, and eliciting very strong responses.

Like Jesus, they divided the crowds, caused great commotion, and angered many. To them this was just the normal stuff of being a follower of Jesus. And like Jesus, they certainly did not go around looking for trouble. Like Jesus they were gracious and amiable, but like Jesus, plenty of people were outraged by the message proclaimed.

Indeed, if I were simply to offer every text which highlights this divisive and troublesome ministry of the disciples, I would already fill a 1200-word article. So I can only be selective here, and make mention of just some of the episodes found in the book of Acts. 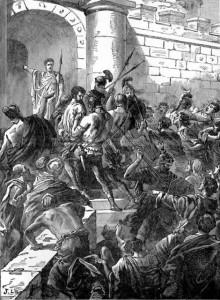 In the very first public appearance of the disciples, division and mixed reactions were fully on display. As we read in Acts 2:12-13: “Amazed and perplexed, they asked one another, ‘What does this mean?’ Some, however, made fun of them and said, ‘They have had too much wine’.”

And things continue this way throughout the entire book. Of course often it was the religious leadership that especially got bent out of shape over what the disciples said and did. In Acts 4:1-4 for example we find this:

The priests and the captain of the temple guard and the Sadducees came up to Peter and John while they were speaking to the people. They were greatly disturbed because the apostles were teaching the people, proclaiming in Jesus the resurrection of the dead. They seized Peter and John and, because it was evening, they put them in jail until the next day. But many who heard the message believed; so the number of men who believed grew to about five thousand.

And in Acts 5:17 we see that “the high priest and all his associates, who were members of the party of the Sadducees, were filled with jealousy.” Just two chapters later we read about some more wild reactions: “When the members of the Sanhedrin heard this, they were furious and gnashed their teeth at him” (Acts 7:54).

Things got so hot and heavy that in Acts 9 we read about a conspiracy among the Jews to kill Paul. And it was not uncommon for riots to break out when the disciples came to a city to preach Christ and him crucified. In Acts 14:1-5 we read about what a divisive ministry the early disciples were involved in:

At Iconium Paul and Barnabas went as usual into the Jewish synagogue. There they spoke so effectively that a great number of Jews and Greeks believed. But the Jews who refused to believe stirred up the other Gentiles and poisoned their minds against the brothers. So Paul and Barnabas spent considerable time there, speaking boldly for the Lord, who confirmed the message of his grace by enabling them to perform signs and wonders. The people of the city were divided; some sided with the Jews, others with the apostles. There was a plot afoot among both Gentiles and Jews, together with their leaders, to mistreat them and stone them.

In Acts 16:39 we discover how the Philippian leaders actually asked Paul and Silas to get out of town because of all the controversy they were creating. And in Acts 17:4-6 we see what riotous results followed on from the ministry of Paul and Silas:

Some of the Jews were persuaded and joined Paul and Silas, as did a large number of God-fearing Greeks and quite a few prominent women. But other Jews were jealous; so they rounded up some bad characters from the marketplace, formed a mob and started a riot in the city. They rushed to Jason’s house in search of Paul and Silas in order to bring them out to the crowd. But when they did not find them, they dragged Jason and some other believers before the city officials, shouting: “These men who have caused trouble all over the world have now come here”.

Differing versions render that last sentence in various ways, eg., the disciples “turned the world upside down” (KJV); or, they “caused trouble everywhere” (GNB). This has been my message all along: wherever they went, they caused trouble! Not deliberately or maliciously, but that was always the outcome of their ministry.

In fact, just a few verses later we read about more mayhem and mania as a result of their preaching and teaching: “When they heard this, the crowd and the city officials were thrown into turmoil” (Acts 17:8). Consider Acts 19 and the riot in Ephesus. Verse 23 says this: “About that time there arose a great disturbance about the Way.”

Soon things really got out of control: “When they heard this, they were furious and began shouting: ‘Great is Artemis of the Ephesians!’ Soon the whole city was in an uproar. The people seized Gaius and Aristarchus, Paul’s traveling companions from Macedonia, and all of them rushed into the theatre together” (Acts 19:28-29).

Just the routine reaction to on-fire disciples preaching the gospel of Christ. The same thing happened in Jerusalem (Acts 21:30-31): “The whole city was aroused, and the people came running from all directions. Seizing Paul, they dragged him from the temple, and immediately the gates were shut. While they were trying to kill him, news reached the commander of the Roman troops that the whole city of Jerusalem was in an uproar.”

In Acts 22:22-24 we find more lively reactions to Paul and his preaching: “The crowd listened to Paul until he said this. Then they raised their voices and shouted, ‘Rid the earth of him! He’s not fit to live!’ As they were shouting and throwing off their cloaks and flinging dust into the air, the commander ordered that Paul be taken into the barracks.”

And the uproar keeps on going on:

When he said this, a dispute broke out between the Pharisees and the Sadducees, and the assembly was divided. (The Sadducees say that there is no resurrection, and that there are neither angels nor spirits, but the Pharisees believe all these things.) There was a great uproar, and some of the teachers of the law who were Pharisees stood up and argued vigorously. “We find nothing wrong with this man,” they said. “What if a spirit or an angel has spoken to him?” The dispute became so violent that the commander was afraid Paul would be torn to pieces by them. He ordered the troops to go down and take him away from them by force and bring him into the barracks (Acts 23:7-10).

As if all that were not enough, in verses 12-22 in the same chapter we read about a plot to kill Paul, in which over 40 men “formed a conspiracy and bound themselves with an oath not to eat or drink until they had killed Paul”. Wow, now that is some reaction!

In Paul’s trial before Felix a lawyer named Tertullus said this of Paul the rabblerouser: “We have found this man to be a troublemaker, stirring up riots among the Jews all over the world” (Acts 24:5). And when Paul testified before Festus we find him interrupting Paul: “You are out of your mind, Paul! Your great learning is driving you insane” (Acts 26:24).

So why mention all this? Simple: Such was the ordinary course of events in the lives of the first disciples. This was no quiet life. This was no “your best life now”. This was no picnic. This was all out spiritual warfare which always produced very real reactions wherever they went.

As mentioned, I am not suggesting we go out of our way to cause trouble. Quite the opposite: we are to respectfully and lovingly share biblical truth. But no matter how irenic and diplomatic we might be, it is simply inevitable that the Word of God proclaimed by the power of the Holy Ghost will cause massive reactions – some good and some bad.

Moral of the story: if in your daily Christian life you are provoking no one, angering no one, upsetting no one, offending no one, then you might have to ask yourself if you are really living a biblical Christian life, or are just going along with the crowd.

If all we want is a life of ease, of comfort, of relaxation, we can have it – but we will then not be true followers of Christ. Tragically so many folks who claim to be Christians just want to be happy and wealthy and well-liked. But that is not the way of the true believer.

As Leonard Ravenhill once said: “You see, what people are seeking today is a painless Pentecost. There isn’t such a thing. What happened immediately after Pentecost? They prospered? Yes? No! They went to jail! It wasn’t prosperity; it was prison, pain, privation, and persecution.”

The choice is ours: will we follow in the footsteps of Jesus and the disciples, or will we allow today’s carnal and compromised preachers to tell us to just live the good life? I know which road I prefer. Do you?

16 Replies to “Christians Getting Into Trouble”