Since the infamous 9/11 of 14 years ago there have been 27,401 Islamic terrorist attacks. Did you get that? These deadly attacks were not carried out by frustrated Baptists or disgruntled Buddhists. These attacks were carried out by devout Muslims in the name of Islam.

Earth calling Islam: we have a problem here. There is something really wrong with a religion – really a political ideology – which results in so much bloodshed, terror, hatred and violence on a daily basis. No other religion even comes close to this. Islam is in a class of its own when it comes to bloody terrorism.

As such, something must be done. Some voices are calling for the reformation of Islam. Yes, well that might be something worth contemplating. Obviously Islam V1 is not working out so well – at least for the rest of the world, for us infidels, etc. 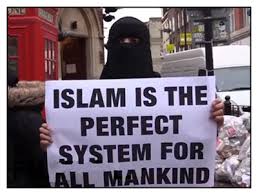 However one might ask if this is even possible. Islam is regarded as a perfect religion, and the perfect final revelation of Allah. How can you reform that which is perfect? Indeed, the idea of reforming Islam is seen as blasphemous to faithful Muslims.

Moreover, Muhammad is seen as the perfect model, the ideal example of what every Muslim should aspire to and be like. So if Muhammad was a murderous warlord, personally involved in the killing of his enemies, the leader of a hundred armed raids, involved in polygamy and even marriage to children, then any good Muslim will seek to go and do likewise.

So how helpful is it to speak about reforming Islam? To reform Islam – meaning for most folks to strip it of its violent, misogynist, intolerant, anti-Semitic, and fascist elements – would be to basically destroy Islam itself. As William Kilpatrick rightly states:

Islam, not just radical Islam, is a threat to Christianity. The Muslim world can go through periods of quiescence in which Islam itself recedes into the background, but radicalism is part of the genetic structure of Islam. Any true “reform” of Islam is going to be of the “operation-was-successful-but-the-patient-died” variety. That is, if you were to eliminate all the violent, supremacist, and misogynist elements in Islam’s basic texts you wouldn’t have much left.

I have written about all this at greater length elsewhere: billmuehlenberg.com/2011/11/30/on-reforming-islam/

But we still have some Western leaders and even some Muslims speaking about reforming Islam. For example, just this past weekend in Washington DC some Muslims gathered to speak about the need for reform. As one report says:

It takes courage to stand up publicly to radical Islam, even if you’re Muslim. Maybe especially if you’re Muslim. Ask Asra Nomani. On Friday she and a dozen of her fellow Muslims went to the Islamic Center of Washington, D.C., and posted a declaration on the door denouncing violent jihad, rejecting Islamic statism and opposing the “ideology of violent Islamic extremism.”
The declaration announced the formation of the Muslim Reform Movement, an international organization aimed at countering the beliefs of Middle East terrorist groups like Islamic State in what the document describes as a “battle for the soul of Islam.” Was Ms. Nomani nervous? No doubt. But the recent bloodshed in Paris and San Bernardino, California, spurred by radical Islam has convinced her the Muslim community needs to confront frankly the connection between terrorism and religion, not deny that it exists.

So what are we to make of this? Well, if it is legit, and not just more taqiyya (Islamic justified deception), then we can applaud their efforts and wish them well. But note that only a dozen made this stand. As the article goes on to say:

Whether the Muslim Reform Movement can build support is another question. Groups of U.S. Muslims have periodically held anti-terrorism rallies and marches after high-profile attacks, but the events tend to draw crowds of a few dozen, according to Jihad Watch. “Given a chance to show how Muslims overwhelmingly reject ‘extremism,’ only a handful show up, and add in whining about ‘Islamophobia’ to their protest against the Islamic State,” said the Nov. 29 article in Jihad Watch.

Indeed. So we might have a way to go yet before masses of all those so-called moderate Muslims start speaking out. Voices closer to home have been making the same call, most notably Tony Abbott just yesterday. As one write-up puts it:

Tony Abbott has controversially called for a religious “reformation” of Islam, speaking out against a “culture” that “thinks you can kill in the name of God”. The former Prime Minister made the comments in a wide-ranging interview on the Paul Murray Live program on Sky News. Mr Abbott said not only did there need to be a military offensive, but also a “hearts and mind” offensive to tackle the rise of radical Islam while also calling for Australians to have greater confidence in Western civilisation.
“We’ve got to work closely with live-and-let-live Muslims because there needs to be, as President (Abdel Fattah) Al-Sisi of Egypt has said, a religious revolution inside Islam,” Mr Abbott said on the program. “All of those things that Islam has never had – a Reformation, an Enlightenment, a well-developed concept of the separation of church and state – that needs to happen, but we can’t do it; Muslims have got to do this for themselves, but we should work with those who are pushing in that direction.
“The other thing that’s needed is a restoration of cultural self-confidence in those who are supporters of Western civilisation. All cultures are not equal and, frankly, a culture that believes in decency and tolerance is much to be preferred to one which thinks that you can kill in the name of God, and we’ve got to be prepared to say that.”

All sensible enough, and well worth a try. But as stated, whether genuine reform of Islam is even possible is a moot point. However we should support all those with a genuine desire for much-needed change, both within and without the Muslim community.

However, no matter how sensible and vitally needed such remarks might be, as can be imagined, all the usual suspects have come out of the woodwork to angrily decry Abbott’s reasonable words. Indeed, there are dangerous and treasonous fools among us.

Consider one of our leading moonbat of the year contenders, Greens leader Richard Di Natale. He tore into Abbott, claiming he was “fanning the flames of division”! Yes he actually said that. Why do I suspect that if this guy was around in the 1930s he would have said the same about those with concerns about the Nazis? ‘Now Churchill ol’ boy, don’t you know we must just get along with Hitler, and not be so divisive?’

Another strong contender for the above-mentioned award has to be one of our most deplorable ex-politicians around, Kristina Keneally. In arguably one of the most moronic articles ever to disgrace the pages of the Guardian (already a thoroughly disgraced leftist rag), she said some utterly mindboggling tripe, beginning with these words of wisdom:

Jesus Mary and Joseph, Tony Abbott. Did you just tell Muslims that they need a theological reformation, like Christianity has had? I know it was some time ago that you were in the seminary, but surely you remember that the Reformation created Protestantism. You and I are members of the unreformed strain of Christianity, the Roman Catholic church. You and I and our 1.2 billion fellow Catholics around the world have had no reformation. We are part of a church that has steadfastly refused to embrace, in both internal structures and theological development, modern concepts like democracy or gender equality.

Yep, you read that right. Innocent men, women and children the world over are having their heads hacked off in the name of an archaic eighth century death cult, and all poor old Kristina can do is whine about sodomite marriage. Yep, makes perfect sense.

Um news flash Kristina: Christianity in all of its forms has always upheld the biblical truth that marriage is between a man and a woman – full stop. So there is absolutely nothing to reform here. Indeed, her idea of “reform” is nothing other than the destruction of historical Christian moral teaching.

She and Di Natale make such a great couple. But the rot does not end there. Even our own Liberal Party leader has gotten bent out of shape by Tony’s remarks. Of course given that he led a campaign to backstab and depose of him, it should be clear that he has utterly no respect for the man. As one report states:

Speaking on ABC local radio, the Prime Minister said Mr Abbott was entitled to his personal opinion. “It’s a complex area,” Mr Turnbull said. “Plainly the vast, vast majority of Muslims are as appalled by extremism, and particularly violent extremism, as we are,” Mr Turnbull said. “The extremism of ISIL or Daesh, these terrorists, is utterly rejected by the leaders of the great majority Muslim nations.

Turnbull should just join Kristina and move over to the Greens. They all share the same clueless and treacherous ideology. Turnbull has been pushing pro-Islam baloney for years now, and has never had the guts or the sense to call out Islam for what it is.

So that my friends is the reason why we are in such a mess today. A few Muslims and a few ex-PMs make some sensible remarks about there being a very real problem with Islam, and they get dumped on by the nutter dhimmis that infest not just the Greens and Labor, but the Libs as well.

This is why we are losing. This is why we regularly find blood on our streets. And this is why more Australians, and Americans, and Europeans will die while adherents of the religion of peace scream out their love cry, Allahu Akbar. With traitors in our midst, the jihadists just sit back and laugh. So much of their work is already being done for them.

I however will keep speaking out. We are in a war and we cannot remain silent. The price is too high for silence, cowardice or appeasement. As Egyptian-American human rights activist Nonie Darwish once rightly put it:

Western civilization has no idea that it is entrusted with the enormous responsibility of saving humanity. This is much more important than saving endangered species and more essential than stopping climate change, because if Islam wins, all such Western efforts will cease, because they are not Islamic values. The West must never be tolerant of an intolerant ideology that seeks to destroy it.

15 Replies to “Islam, Reform, and Traitors in Our Midst”