The Christmas story – along with the Easter story – is the heart of human history: the Son of God left the comforts of heaven to come to a sinful and polluted earth to dwell amongst us, live a perfect life, die a cruel death, and then rise again, all for our sake.

Sin and selfishness have separated mankind from God, so the perfect God became the perfect man so that reconciliation might be achieved for those who turn back to God in faith and repentance. That is the gospel message, and that is why we celebrate days like Christmas and Easter.

The idea of leaving and returning is a big part of this story. As mentioned, the second person of the Trinity had to leave everything and be born into a corrupt, sinful and wretched world, only to be reunited with the Godhead after the resurrection.

Of course the doctrine of the Trinity is mysterious, and in one sense there never was a separation of the members of the Trinity. They are always one. Yet in another sense Jesus did pray about not being forsaken by the Father while hanging on the cross. Such spiritual truths are too marvellous and mysterious for us to fully comprehend.

So to speak of Jesus leaving and returning may not be the best language to use, but hopefully you get my point. And the Bible is full of such stories. The story of the Prodigal Son (Luke 15:11-32) is one such classic tale of leaving and returning. An ungrateful and rebellious son leaves home in a huff, lives a debauched life, completely wastes his inheritance, and is eventually left with the whole pigsty to himself.

He comes to his senses and heads home, hoping his father will somehow forgive him and let him back in. As we read in verses 18-19, “I will arise and go to my father, and I will say to him, ‘Father, I have sinned against heaven and before you. I am no longer worthy to be called your son. Treat me as one of your hired servants’.” 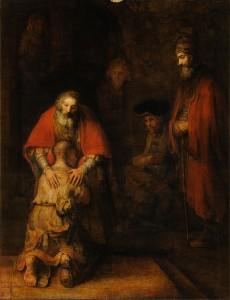 But the Father blows him away with love, forgiveness and acceptance. As he says to his other son who complains about all this: “It was fitting to celebrate and be glad, for this your brother was dead, and is alive; he was lost, and is found” (v. 32).

That is indeed a story of leaving and returning. It is also a story of homecoming and great joy. And that is always the case when one sinner returns to Father God. In the two other lost and found parables of Luke 15 (the Lost Sheep, vv. 1-7, and the Lost Coin, vv. 8-10), we twice hear Jesus speak about the joy in heaven over one sinner who repents.

That is the highlight of the two great stories and holidays we celebrate. That is why Christ came, died, and rose again: to save sinners, which in turn brings great joy and great glory to God. Thus the Prodigal Son story very nicely encapsulates so many great truths of the gospel message.

While one may not agree with everything Henri Nouwen has written, there is much to contemplate in his 1992 volume, Return of the Prodigal Son: A Story of Homecoming. He directly speaks of this joy and homecoming:

Celebration belongs to God’s Kingdom. God not only offers forgiveness, reconciliation, and healing, but wants to lift up these gifts as a source of joy for all who witness them. In all three of the parables which Jesus tells to explain why he eats with sinners, God rejoices and invites others to rejoice with him. “Rejoice with me,” the shepherd says, “I have found my sheep that was lost.” “Rejoice with me,” the woman says, “I have found the drachma I lost.” “Rejoice with me,” the father says, “this son of mine was lost and is found.” All these voices are the voices of God. God does not want to keep his joy to himself. He wants everyone to share in it. God’s joy is the joy of his angels and his saints; it is the joy of all who belong to the Kingdom.

Certainly homecoming after a long absence is an occasion of great joy. Let me finish this piece by offering two illustrations of this to help make this even more vivid. Some of you may have noticed several television programs which feature people in near-impossible situations miraculously escaping death.

With titles like ‘I Should Not be Alive’ each episode is quite amazing, and usually involves one of several scenarios: someone abandoned at sea, stranded in a desert, lost in a jungle, or stuck on a mountain. These are incredible tales of survival, and the harrowing experiences some people go through is quite remarkable.

Obviously the ones featured in these stories are those who survived and lived to tell about their horrific ordeal. Not everyone makes it of course. And the climax of each story is the ultimate rescue along with being reunited with loved ones.

Most of these folks speak of their ordeal as a life-changer, and how they now never look at life so carelessly anymore. Every day and every relationship becomes so much more precious after such an incredible life and death struggle. They were lost, but now they are found.

Another illustration will resonate with at least some folks – although perhaps leave a few others cold. I refer to a new film which is doing extremely well at the box office. For those who love the Star Wars films – and our whole family always has – going to see the latest version (episode 7) is a long-awaited and much looked-forward to event.

So the family went this afternoon and it did not disappoint. At the very least, it was several hours of brainless entertainment to take my mind off the weightier issues of life, plus it was a good chance to do a family activity. And of course for any gung-ho Star Wars fan, the thought of seeing some of the old original heroes from films now nearly 40 years old was a real highlight.

So even a hardened, crusty old culture warrior like myself got a bit of a glimmer in the eye and a tingle in the heart to see some of these original characters resurrected for what might be their final role in this long-standing series. While the films have much to offer for true Star Wars buffs, seeing Luke and Han and Leia again (and of course C-3PO and R2-D2) was a treat for many.

And it reminded me right away of some very real spiritual truths. To see someone you have not seen for a long time can be such a powerful and moving experience. This is especially the case with a family member, loved one or close friend.

And right away I thought of some friends who had gone on to be with the Lord – some just recently. The heart aches a bit each time you remember these folks, but then joy creeps in because you realise that one day we will be reunited with them. We will once again see each other, hug each other, and enjoy each other’s company.

That is what the combined Christmas and Easter story has made possible. Without these two stories none of this would happen. Indeed, we would then be of all men most miserable as Paul put it (1 Corinthians 15:19). But because Jesus came, died and rose again, there is hope for all of us.

Those who recognise their great debt and need as sinners and are willing to turn from sin and self and follow Christ get pardon, forgiveness, reconciliation and life eternal with our Saviour, along with others who have done the same. That day when we are all reunited will indeed be a day of great joy.

That is a homecoming no one wants to miss. And that is why we celebrate Christmas – and Easter. It is indeed the greatest story ever told.

4 Replies to “Christmas: Leaving Home and Coming Back Again”