For most folks, a festive family get together, with good food and good fellowship, as we celebrate the birth of Jesus, is the way Christmas is normally spent. And rightly so. But not for everyone sadly. Each year at this time we read news items about those who are killed or injured.

We regularly read about tragedies which spoil the Christmas celebrations. Just yesterday there was a news item of a family home which burned down, but the young son was pleased that some presents were rescued nonetheless. I too have known just a little bit about this.

Last year our entire extended family celebrated Christmas at a hospital – a children’s hospital. A nephew was in a real bad way a year ago, and it really did not seem like he would pull through. So last year’s celebrations were exceedingly sombre and subdued.

The good news is this nephew is now home and doing so much better, so it is a huge contrast this year compared to last year. But others will find themselves away from home because they have a great care for others. I refer to courageous and dedicated prolifers who often will be celebrating Christmas in jail.

I have written up cases of this on numerous occasions. Some of these champions, like Linda Gibbons, have spent years – including a few Christmases – in prison for standing up for the unborn. See her story here: billmuehlenberg.com/2014/10/01/we-need-more-people-like-linda-gibbons/

Others include our own Graham Preston. He too has had many stints in jail because he cares enough about babies being led to their slaughter. See here: billmuehlenberg.com/2014/03/04/stand-up-for-babies-you-will-be-arrested/

Here I want to highlight another great saint who is willing to miss out on family Christmas to stand up for those who cannot speak for themselves. I refer to Canadian prolife activist Mary Wagner. She is another champion for life who has also spent years in prison for doing what very few of us would ever dream of doing. 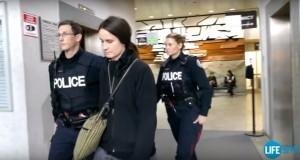 Well, she has just been arrested again, and it looks like another bleak Christmas for her and her loved ones. The story goes like this:

Pro-life prisoner of conscience Mary Wagner appeared at College Park court Monday, following her arrest Saturday at an abortion center in the heart of Toronto’s trendy Bloor West Village. Wagner is charged with two counts of failing to comply with a probation order, and one count of causing mischief under $5,000.
The slender, dark-haired 41-year-old entered the Bloor West Village Women’s Clinic, located on the fourth floor of an office building at 2425 Bloor Street, shortly after 9:00 a.m. on December 12, carrying pro-life pamphlets in a bag also filled with red roses.
At about 11:30, Constables Emma Morley and Jason Keegan of Toronto Police Service 11 Division escorted Wagner from the building, and warned her that if she returned to the abortion center she would be arrested. Undeterred, Wagner entered the building again, and disappeared into the elevator. The officers, meanwhile, left the scene, but returned shortly afterward and arrested the pro-life activist.
It is unclear what happened in the abortion facility, but one source told LifeSiteNews that Wagner allegedly told her by phone while in custody that she had been pushed by an abortion center staff member while attempting to speak to women in the waiting room. After an initial appearance at Toronto’s City Hall courts Sunday, Wagner was remanded at the Vanier Centre for Women in Milton.

Since beginning her full-time pro-life work in 2000, Wagner has been arrested at least six more times, served with numerous probation orders and spent upwards of four years in jail. She explained her reasons in an open letter published in April 2015 on the Witness for Church and Pope blog: “People have often asked me if I could not simply stay outside the area I am forbidden to enter, and in that way, avoid arrest.”
“But this question forgets something: the children scheduled to be killed will have no one to stand up for them. We will stop being present to them and to their mothers out of obedience to an immorally imposed restriction by those entrusted with authority. If we think in terms of getting arrested or not getting arrested, we lose sight of Christ, hidden in: ‘the distressing disguise of the poor’ – those so poor, we cannot even see or hear them.”
Wagner joins fellow pro-life prisoner of conscience Linda Gibbons at Vanier Centre for Women in Milton. Gibbons was arrested September 2, and will be tried on charges of disobeying a court order on January 13, 2016. Wagner’s next scheduled court appearance will be by video from the Vanier jail to College Park, December 17 at 9 a.m., Courtroom 505.
Letters can be sent to Linda Gibbons and Mary Wagner at Vanier Women’s Centre, address: 655 Martin St, Milton, ON, L9T 2Y1.

You can also sign a petition on her behalf as well as contact her through this helpful site: www.citizengo.org/en/lf/31829-send-note-mary-wagner-pro-life-prisoner-conscience?tc=fb&tcid=18394259

It is fitting that this morning in my daily reading I came upon this passage: “Continue to remember those in prison as if you were together with them in prison, and those who are mistreated as if you yourselves were suffering” Hebrews 13:3.

Here we have another superstar of the faith willing to sacrifice everything – including her very freedom, even at Christmas – to stand for the defenceless and the voiceless as they are about to be killed. The very least we can do is pray for Mary and others like her.

And the very least we can do is write to her and encourage her. Remember, Jesus said the same thing in Matthew 25:40-46 as the writer to the Hebrews, and he expects us to take it seriously:

2 Replies to “And How Are You Spending This Christmas?”