Not all thoughts are equal, and not all thinking about Islam is of the same quality and veracity. In fact, there is plenty of just plain idiotic thinking about the political ideology known as Islam. Daily we hear of more mind-numbing foolishness when it comes to this belief system.

And we have heard a real variety of remarks on Islam in just the past few days, ranging from the very bad to the very good. Now, with my title, you might think I will offer three different views here. But my first candidate was so utterly woeful that he easily wins both the bad and the ugly categories. 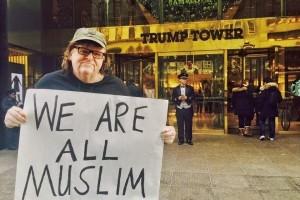 Yep, he is now lecturing all of us unenlightened peons as to how we ought to think about Islam. It is so nice of him to clear things up and inform us about the reality of this situation. So what is he up to now? Well, in what has to be one of the most inane ideas you will hear this year, he has actually started a “We are all Muslim” campaign.

Yes you read that right: we are all actually Muslims! He actually penned an entire piece on this, sharing his high-grade wisdom with the rest of us dunces. And what pearls we find in his treatise on Islam. There are so many howlers here that one does not know where to begin.

But let me just highlight what has to be the epitome of his moonbattery as he chews out Donald Trump for his stance in Islam:

Just as we are all Mexican, we are all Catholic and Jewish and white and black and every shade in between. We are all children of God (or nature or whatever you believe in), part of the human family, and nothing you say or do can change that fact one iota. If you don’t like living by these American rules, then you need to go to the time-out room in any one of your Towers, sit there, and think about what you’ve said….
We are all Muslim. Deal with it.

Um, what? What sort of powerful hallucinogens is this guy on? Earth calling Michael: I am not a Mexican. And neither are you. I am also not a Muslim, or a Catholic, or a Jew. And last time I checked, I am not black either. Neither are you – so deal with it.

This is true of every person on earth. We are not all Muslims or blacks or God’s children. But we are all sinners headed for a lost eternity unless we turn from our selfishness and sin and come to Christ in faith. So spare us the mind-boggling sermons Michael – you really don’t have a clue.

Now in complete contrast to the braindead idiocy of Moore, we have one woman who has more sense, understanding and clarity on this matter than a thousand Moores put together. She has offered us some very good thinking indeed about Islam, and for daring to do so, she has had to pay a very big price.

I refer to Destiny Velez who has more solid understanding about Islam (and other faiths) in her little finger than Moore has in his rather large body. For standing up for truth in this area she has been punished by the forces of political correctness. Her story goes like this:

Miss Puerto Rico Destiny Velez has been suspended indefinitely from Miss America competition after she fired off a series of vicious anti-Muslim tweets in response to the “We Are All Muslim” protests led by director Michael Moore, the Atlanta Journal Constitution reports.
The 20-year-old Velez directed her angry tweets at the film director — who created a buzz last week when he held up a sign reading “We Are All Muslim” outside of the Trump Tower and shared an open letter online claiming that, unlike Trump, “we are not a country of angry white guys.”

Her tweets were hardly “vicious” and included the following rather informed and intelligent remarks:

-Islamic God is NOT the same God of the Christians & the Jews.

-There’s NO comparison between Jews, Christians & Muslims. Jews nor Christians have terrorising agendas in their sacred books.

-Hold a sign that says “We are all believers in Christ”.

So this gal stands up for Christianity, and states the perfectly obvious truth that we are not all Muslims and all religions are not the same, and for that she gets the boot. Hmm, typical. Clowns like Moore can say the most ridiculous rubbish and attack anyone and everyone and no one gives a hoot, but one poor gal from Puerto Rico stands up for Christianity and all hell breaks loose.

Well she sure has my vote. I will take one courageous truth speaker like Velez any day of the week over the lying, obnoxious bully Moore. As Orwell reminded us decades ago, “During times of universal deceit, telling the truth becomes a revolutionary act.”

Velez is a true hero and revolutionary, while Moore is just another brainless buffoon and clueless dhimmi. And when the Islamists sweep into power, thanks to moronic appeasers like Moore, he will be among the first to lose his head. Thank God for courageous champions of truth like Velez. We sure need a whole lot more champs like you.

9 Replies to “Thinking About Islam – The Good, the Bad, and the Ugly”