Anyone reading these words right now is doing so because of the amazing mercy and grace of God. Because of the first coming of Christ, the way is now open for every one of us sinners to be reconciled to God, through faith and repentance, because of what Christ did for us at Calvary.

But just as biblically certain is the truth that Jesus will be coming a second time, and then the period of grace comes to an end, and instead, a time of hard-core payback will take place. Those who continue to shake their fists at God and spit in his face will discover that grace does not last forever.

Payback is coming. Call it what you will: the wrath of God, divine vindication and retribution, and so on, but this is a time where the enemies of God are judged swiftly and harshly. One simply has to read the book of Revelation to see these truths expressed most forcefully and threateningly.

Having just finished the book, this is abundantly clear. (Gentle reminder: all believers need to read the Bible daily, and the whole thing at least once a year. Start on January 1 with Genesis 1 and on December 31 you will finish Revelation 22 – just three chapters a day needed!) 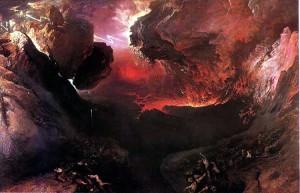 Revelation is about many things, but certainly some key themes are the wrath of God and his judgment upon the unrepentant. Much of the book is devoted to divine payback. God will not let rebellion, sin and unbelief continue forever. One day it will all come to a halt.

Now we can call upon the grace of God and be spared wrath to come. But as R. C. Sproul has rightly said, “God’s grace is not infinite. God is infinite, and God is gracious. We experience the grace of an infinite God, but grace is not infinite. God sets limits to his patience and forbearance. He warns us over and over again that someday the ax will fall and His judgment will be poured out.”

Of course both angry atheists and carnal Christians do not want to hear such truths. The latter may quote from Jesus sometimes – but usually only from the Gospels. They are averse to talking about the Jesus found in Revelation, with his robes dipped in blood.

Indeed, these folks avoid like the plague the description of the heavenly warrior as found in Rev. 19:11-16:

I saw heaven standing open and there before me was a white horse, whose rider is called Faithful and True. With justice he judges and wages war. His eyes are like blazing fire, and on his head are many crowns. He has a name written on him that no one knows but he himself. He is dressed in a robe dipped in blood, and his name is the Word of God. The armies of heaven were following him, riding on white horses and dressed in fine linen, white and clean. Coming out of his mouth is a sharp sword with which to strike down the nations. “He will rule them with an iron scepter.” He treads the winepress of the fury of the wrath of God Almighty. On his robe and on his thigh he has this name written: “king of kings and lord of lords”.

But Revelation is of course full of such language. No meek and mild Jesus here but a conquering king who will kick butt big time. Time and again we find detailed descriptions of divine retribution and the just judgment of God being poured out on his enemies.

And what is even more remarkable – something the wimps for Jesus will never countenance nor understand – is these amazing pictures of terrible judgment are often followed up by mighty praise and worship sessions in the heavenlies.

God is wondrously praised exactly because of his judgments, not in spite of them. The heavenly hosts worship and adore God because of his holiness, his righteousness, and his wrath. Today however most spineless believers want nothing to do with any of this.

Well, they will then be in for a real shock when they finally stand before the risen Christ. The examples in Revelation of divine payback and the celebration thereof are numerous. Here are some of them:

Rev. 11:15-19 The seventh angel sounded his trumpet, and there were loud voices in heaven, which said:
“The kingdom of the world has become
the kingdom of our Lord and of his Messiah,
and he will reign for ever and ever.”
And the twenty-four elders, who were seated on their thrones before God, fell on their faces and worshiped God, saying:
“We give thanks to you, Lord God Almighty,
the One who is and who was,
because you have taken your great power
and have begun to reign.
The nations were angry,
and your wrath has come.
The time has come for judging the dead,
and for rewarding your servants the prophets
and your people who revere your name,
both great and small—
and for destroying those who destroy the earth.”
Then God’s temple in heaven was opened, and within his temple was seen the ark of his covenant. And there came flashes of lightning, rumblings, peals of thunder, an earthquake and a severe hailstorm.

Rev. 12:10-12 Then I heard a loud voice in heaven say:
“Now have come the salvation and the power
and the kingdom of our God,
and the authority of his Messiah.
For the accuser of our brothers and sisters,
who accuses them before our God day and night,
has been hurled down.
They triumphed over him
by the blood of the Lamb
and by the word of their testimony;
they did not love their lives so much
as to shrink from death.
Therefore rejoice, you heavens
and you who dwell in them!
But woe to the earth and the sea,
because the devil has gone down to you!
He is filled with fury,
because he knows that his time is short.”

Rev. 15:1-4 I saw in heaven another great and marvelous sign: seven angels with the seven last plagues—last, because with them God’s wrath is completed. And I saw what looked like a sea of glass glowing with fire and, standing beside the sea, those who had been victorious over the beast and its image and over the number of its name. They held harps given them by God and sang the song of God’s servant Moses and of the Lamb:
“Great and marvelous are your deeds,
Lord God Almighty.
Just and true are your ways,
King of the nations.
Who will not fear you, Lord,
and bring glory to your name?
For you alone are holy.
All nations will come
and worship before you,
for your righteous acts have been revealed.”

Rev. 16:4-7 The third angel poured out his bowl on the rivers and springs of water, and they became blood. Then I heard the angel in charge of the waters say:
“You are just in these judgments, O Holy One,
you who are and who were;
for they have shed the blood of your holy people and your prophets,
and you have given them blood to drink as they deserve.”
And I heard the altar respond:
“Yes, Lord God Almighty,
true and just are your judgments.”

Rev. 18:20 “Rejoice over her, you heavens!
Rejoice, you people of God!
Rejoice, apostles and prophets!
For God has judged her
with the judgment she imposed on you.”

Are you starting to get the picture? Divine wrath is poured out on the enemies of God, and thanksgiving, praise and adoration immediately and appropriately follow. There is absolutely nothing for the believer to be ashamed of here. Divine justice is a wonderful thing. God’s judgments are a glorious thing.

We are to rejoice with God that one day all evil will come to an end, all injustice and sin will be properly dealt with, and all ungodliness and unrighteousness will be judged. That is good news. I have addressed this topic often, as in this piece: billmuehlenberg.com/2014/09/05/jesus-justice-and-vindication/

Now is the day of salvation. Now is the time for repentance and turning to God. We will not always have this opportunity. We must avail ourselves of it now. The day of mercy and grace will not last much longer. Let me again quote from Sproul (this time in his discussion of Romans 1:18-32) as I close this article:

5 Replies to “Glorious Grace Now, But Divine Payback is Coming”