The battle for life is an ongoing struggle with some wins and some losses along the way. In this debate we certainly do get the good, the bad and the ugly. There is some great news coming out about baby saving, but there is also some rather horrific news.

Let me start with the bad news and work my way up to the good. Two really nasty episodes can be recounted here. The first has to do with a baby-hater who really got bent out of shape seeing a picture of – well, a baby – on a magazine cover. The story goes like this: 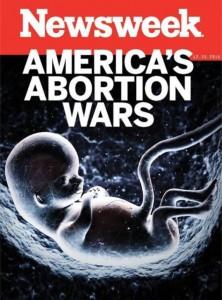 One women’s magazine is hyperventilating over the fact that an image of a fetus actually looks like… a baby. Writing for Elle magazine, Sady Doyle recently criticized a Newsweek December cover in a piece titled “Why Does Newsweek’s ‘Abortion Wars’ Cover Show a Cartoon Fetus Instead of a Woman?” Doyle commended the magazine for tackling abortion in its new cover story – but bashed the cover illustration for showing a fetus that looked “more like a baby” than an “actual pregnancy.” Puzzled yet?
In a rant, Doyle described what made her “flabbergasted” by the cover: the fact that the image showed a “well-developed, relatively late-term fetus” with “no sign” of the woman in whose “uterus it is presumably housed.”
Guessing that the fetus was between twelve and fourteen weeks old, Doyle criticized the picture for making the age “hard to tell.” “[I]t looks about five times bigger than the translucent, two-inch-long fetuses you normally find at that stage,” she wrote, “this image looks less like an actual pregnancy, and more like an adorable computer-generated alien.” “Or, to be blunt: More like a baby,” she added.

Yep, we sure can’t allow that to happen: showing pictures of unborn babies which in fact look like babies. That goes totally against the pro-death narrative – this is not a baby, just a clump of cells. Of course the baby killers have always tried to hide what they do: they don’t want you to see who is actually being killed.

Soon enough the pro-abort fems will want to see all pictures of unborn babies banned. They already get all worked up about things like ultrasounds and so on. Anything to dehumanise the baby is what they want. If they can hide the truth of who they are killing, they can more easily get away with their nefarious deeds.

Not to be outdone, consider this case of diabolical delusion: a gal who claims to be a Christian who loves killing babies. Consider how one story opens on this deceived apostate:

Carolyn Payne grew up in a good Christian home with loving parents and opportunities to make the most of her life. Instead, she decided to become an abortion doctor.
Payne, an Ob/Gyn resident, wrote a shockingly bold column for the women’s website XO Jane about how her faith and upbringing influenced her to abort unborn babies for a living. Through her experiences, Payne flaunted her career goal and what she perceived as the importance of training programs for abortion doctors in the U.S.
“I love providing abortion care to women, and I am proud to do so,” Payne wrote, adding that she and many of her colleagues are “not afraid, embarrassed or ashamed to say so.”

But let me offer two good news stories on abortion to offset those two nasty stories. The first one is very good news indeed. In America, the battle for life really seems to be making some progress. There are various ways we can measure this, but one way is to track how many abortion mills are still in operation. Consider this encouraging report:

That is certainly terrific news. Of course it will never be fully good news until all these baby-killing factories are shut down, but real advances in the cause of life are clearly being made. We must congratulate all the tremendous hard-working pro-lifers who have helped to make this possible. They are absolute heroes.

One final good news story is a personal one. A very hard-core pro-abort feminist has had a huge change of heart, and has sent shockwaves through her circle of influence with her massive turnaround. Let me offer a good hunk of her amazing story:

Sara Fernanda Giromin first made herself known to Brazil and to the world under the alias “Sara Winter” in 2012, when she became the founding member of Femen Brazil, and led a trio of girls in a number of topless protests that garnered much media attention. However, only three years later, the young activist has done an about-face and has declared war on feminism and abortion, and is apologizing to Christians for her offensive behavior. She has also published a short book detailing the abuse and disappointment she suffered at the hands of fellow feminists.
Giromin’s changing attitudes were first revealed in October of this year, when she expressed her repentance for an abortion that took the life of her first child, and acknowledged that the recent birth of her second child had changed her attitudes regarding the right to life.
“I have repented of having had an abortion and today I ask for forgiveness,” wrote Giromin. “Yesterday marked one month after the birth of my baby and my life has taken on a new meaning. I’m writing this while he sleeps serenely on my lap. It is the greatest sensation in the world.” “Please, women who are desperate to abort, think carefully about it. I was very sorry I did it. I don’t want the same for you,” she added.
In the months that have followed, Giromin has revealed to her readership her disillusionment with feminism and gender ideology, and has repudiated her “bisexual” orientation. She has also expressed remorse for having offended Christians in January of 2014, when she engaged in a well publicized same-sex kiss with another seminude girl with a cross in the background, in front of the Church of Our Lady of Candelária in Rio de Janeiro. The photo of the two had become iconic in Brazil of homosexual contempt for Christianity.
“Asking for forgiveness is certainly not an easy thing to do,” said Giromin in a YouTube video entitled “I ask Christians for forgiveness for feminist protest.” “We went way too far and ended up offending many religious and non-religious people,” she added, recognizing the stunt as a form of “blasphemy.” She adds that she is making progress in her own spiritual life, although the exact nature of her current beliefs remains unclear….
In her new book “Bitch, no! Seven times I was betrayed by Feminism” Giromin writes that she was repeatedly pushed to do drugs, to engage in sex with strangers, and was even molested by a lesbian, all at the hands of feminists who claimed to be fighting for women’s equality. She also recounts that when she once confided in a feminist academic that she was involved in prostitution while still a teen, she was devastated to find that the woman affirmed her behavior and did nothing to offer her a way out. She notes that one of the few times she received affection, kindness, and understanding from a female friend, it was from an older, conservative “anti-feminist,” who treated her like a daughter.
Giromin is donating a percentage of her book earnings to pro-life causes, and is now beginning to give talks against feminism, gender ideology and cultural Marxism, teaming up with Christian psychologist Marisa Lobo. “I left that movement of which for four years I was one of the principal symbols in Brazil, and no one can say the contrary!” writes Giromin. “The result? Today I’m much happier and I’m able to help women more.”

Wow, what a story. Please read all of it in the link provided below. So there are real stories of hope out there. Not everything is gloom and doom on the abortion front. Some real significant victories are to be found. While there will always be the ugly stories as offered above, they are far outweighed by the good news stories.

Let us spend the New Year in making even more such good news stories come about, resulting in even more babies rescued from the slaughter houses.

4 Replies to “Hits and Misses in the Abortion Wars”