In the defence of biblical Christianity one must keep affirming certain truths while rebutting certain errors. One error that increasingly raises its ugly head of late is the one that seeks to claim that Christians and Muslims worship the same God. This is in large measure due to two things: rather clueless Christians, and Islamic dawa, or mission.

Muslims have long sought to convince gullible Westerners that their faith is not dissimilar to that of Judaism and Christianity, and that all three are “Abrahamic faiths” which share the same God. This is definitely not the case, as I have sought to explain elsewhere. See here for example:

Some of the non-Muslims currently making the claim that we worship the same God include Pope Francis, Yale Divinity School professor Miroslav Volf, Protestant-turned-Catholic philosopher and lecturer Francis Beckwith, and others. While many folks have debated their claims in the past, a newer voice has certainly caused quite a stir on this issue. 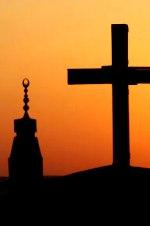 I refer to college professor Larycia Hawkins who recently also claimed that Christians and Muslims worship the same God. This certainly caused no small storm, since she is actually on staff at one of the most well-known evangelical liberal arts colleges in America, Wheaton College.

Thus a major theological war erupted when she decided to push this train of thought. And it certainly did not help matters much when she started wearing a hijab to “identify” with Muslims. This was an equally controversial, and in my books, stupid thing to do.

But her claims about us worshipping the same God are what really has caused upheaval at Wheaton and beyond. Wheaton rightly has taken action against her and has made it clear that this is not the position of the college. And I have written earlier on her beliefs and actions:

As mentioned, she is not alone in pushing this line, but given that this was a Wheaton prof, it caused no small round of debate. Indeed, a number of very helpful articles have recently been penned rebutting her position, and that of Beckwith, Volf, and others. Their rebuttals are well worth alerting you to. For example, G. Shane Morris gets to the heart of the issue:

What matters, and what the media can’t for the life of them seem to understand is this: We, as Christians, do not worship a generic God-of-the-philosophers, non-trinitarian, and infinitely customizable to various faiths. Our God insists on being known as Father, Son, and Holy Spirit, as revealed in the New Testament.
When a Christian or a journalist demands we act like Jesus and just get along with everybody, I remind them that Jesus wrecked the Kumbaya of first-century Jewish theology by making exactly the claim about himself I’m making now: He is God in human flesh.
Do Christians and Muslims worship the same god? Well, is Jesus Christ God? You can’t answer “yes” to both, no matter how loudly the theologians in the media insist otherwise.

That of course is the bottom line in this debate, and it should really be the end of the matter. Former Muslim Nabeel Qureshi speaks to this in more detail as he lays out the obvious differences:

Christians believe Jesus is God, but the Quran is so opposed to this belief that it condemns Jesus worshipers to Hell (5.72). For Christians, Jesus is certainly God, and for Muslims Jesus is certainly not God. How can it be said that Christians and Muslims worship the same God? This fact alone is enough to settle the matter, but at the very least, no one should argue as Volf has that “there isn’t any theological justification” for believing Christians and Muslims worship different Gods. There certainly is, and it is the obvious position when we consider the person of Jesus.
Another difference between the Islamic God and the Christian God that is quite personal to me is his Fatherhood. According to Jesus, God is our Father, yet the Quran very specifically denies that Allah is a father (112.1-4). In fact, in 5.18, the Quran tells Muslims to rebuke Jews and Christians for calling God their loving Father because humans are just things that God has created.
The same is the case when we consider the doctrine of the Trinity. Islam roundly condemns worship of the Trinity (5.73), establishing in contrast its own core principle: Tawhid, the absolute oneness of God. Tawhid specifically denies the Trinity, so much so that it is safe to say the doctrine of God in Christianity is antithetical to the doctrine of God in Islam. Not just different but completely opposed to one another.
There is much more to be said about the differences between the Christian God and the Muslim God, but this much can already be said with confidence: the Christian God, both in terms of what he is (Triune) and who he is (Father, Son, and Spirit) is not just different from the Muslim God; He is fundamentally incompatible. According to Islam, worshiping the Christian God is not just wrong; it sends you to Hell. They are not the same God.

The question of whether Muslims and Christians worship the same God is complex. Wheaton made a respectable decision in giving Hawkins time off to consider the implications of her statement: she is allowing Islamic assertions to subvert the importance of essential doctrine. That said, one ought not fault her harshly for the mistake, as these issues are murky. What is dangerous is the path of Volf, accusing people of bigotry to shut down valid conversations. One can both love Muslims and insist that the God they worship is not the same as the Christian God.
Christians worship a Triune God: a Father who loves unconditionally, an incarnate Son who is willing to die for us so that we may be forgiven, and an immanent Holy Spirit who lives in us. This is not what the Muslim God is; it is not who the Muslim God is; and it is not what the Muslim God does. Truly, the Trinity is antithetical to Tawhid, fundamentally incompatible and only similar superficially and semantically. Muslims and Christians do not worship the same God.

Muslims and Christians indeed share certain beliefs, and it is, of course, possible to believe different things about the same person. “I believe in the Miroslav Volf who teaches at Yale,” says one. “Oh no, I admire the Miroslav Volf who wrote Exclusion and Embrace,” says another. “Idiots,” says a third. “They’re the same man.”
Yet the common beliefs of Muslims and Christians don’t go very deep. At every point, the two diverge. Both say, God is one; but Christians will say that the one God’s oneness is a triunity. Both say, God created the world; but Christians will say that God created through His eternal Word and Spirit.
Volf says that Trinity and incarnation are “fundamental Christian convictions,” but, however fundamental, they don’t identify the living God in distinction from other beings who claim to be God. Volf’s position virtually excludes the possibility of idolatry. The same logic can hold everywhere: “Baal is an idol, and so is Molech,” says an ancient Israelite prophet. “No, no. Baal worshipers worship Yahweh; we just understand Him differently.” Can Volf say of anyone what Paul says of the pagans of his day: “The things the Gentiles sacrifice they sacrifice to demons, and not to God” (1 Corinthians 10:20)?

The justification for Wheaton’s position is finally an evangelical one: The gospel events are the events by which Christians identify the God we worship, the God who is the God of the gospel. In the New Testament, “God” just means “Father, Son, and Spirit” or “the Father of Jesus who raised Him from the dead.” Those who disbelieve the gospel are talking about some other being than this. As Paul puts it in a Christological revision of the Shema, “For us, there is one God, and one Lord Jesus Christ.”

Of course critics have claimed that to say this means we must say that the God of the Old Testament is not the God of Christianity either. But this is patently false. While Islam offers us a totally different God in so many respects, Judaism offers us the one true God, but one who had not yet been fully revealed to us.

I have quoted Al Mohler on this in one of my earlier articles, and his remarks are worth again sharing here, and will serve as a fitting conclusion to my piece:

This line of argument evades the entire structure of promise and fulfillment that links the Old Testament and the New Testament. Abraham and Moses could not have defined the doctrine of the Trinity while they were on earth, but they believed that God would be faithful to all of his promises, and those promises were fulfilled only and fulfilled perfectly in Christ. And, going back to John 8:56-58, Jesus said: “Your father Abraham rejoiced that he would see my day. He saw it and was glad … Truly, truly, I say to you, before Abraham was, I am.”
Evangelical Christians understand that, theologically, there is a genetic link between Judaism and Christianity. That is why Christians must always be humbled by the fact that we have been grafted onto the promises first made to Israel. In terms of both history and theology, there is no genetic link between Christianity and Islam. The Qur’an claims that to confess Jesus Christ as the divine Son and the second person of the Trinity is to commit blasphemy against Allah.
Hard times come with hard questions, and our cultural context exerts enormous pressure on Christians to affirm common ground at the expense of theological differences. But the cost of getting this question wrong is the loss of the Gospel. Christians affirm the image of God in every single human being and we must obey Christ as we love all people everywhere as our neighbor. Love of neighbor also demands that we tell our neighbor the truth concerning Christ as the only way to truly know the Father.
We must also understand that the most basic issue is the one Jesus answered with absolute clarity. One cannot deny the Son and truly worship the Father. There is no question that the Muslim is our neighbor, but there is no way to remain faithful to Scripture and the gospel and then claim that Christians and Muslims worship the same God.

5 Replies to “No, Muslims and Christians Do Not Worship the Same God”