The Wheaton College professor who recently claimed that Christians and Muslims worship the same God certainly caused no small storm. It generated plenty of discussion and controversy, and the matter is certainly not yet resolved. I have already penned several pieces on Larycia Hawkins concerning this matter:

The secular media – and clueless Christians – got things quite wrong here in claiming that Hawkins got into trouble at Wheaton for wearing an Islamic head covering – the hijab. No, that was not at all what caused the ruckus – it was her unbiblical claims about the God of Christianity being the same as the Islamic deity. See my articles above for why she is so wrong on this: 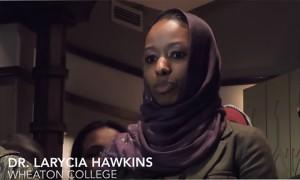 But her wearing a hijab to “identify” with Muslims was an equally controversial, and in my books, stupid thing to do, and it is worth spending some more time on this. I was not alone in seeing this as a foolish and very unhelpful action. Indeed, already a number of women have taken her to task for this, even including some Islamic women. For example, two Muslim women said in no uncertain terms just how wrong all this is:

To us, the “hijab” is a symbol of an interpretation of Islam we reject that believes that women are a sexual distraction to men, who are weak, and thus must not be tempted by the sight of our hair. We don’t buy it. This ideology promotes a social attitude that absolves men of sexually harassing women and puts the onus on the victim to protect herself by covering up….
In the name of “interfaith,” these well-intentioned Americans are getting duped by the agenda of Muslims who argue that a woman’s honor lies in her “chastity” and unwittingly pushing a platform to put a hijab on every woman.
Please do this instead: Do not wear a headscarf in “solidarity” with the ideology that most silences us, equating our bodies with “honor.” Stand with us instead with moral courage against the ideology of Islamism that demands we cover our hair.

As I wrote in my original article about this dhimmi professor:

Spare us this “embodied solidarity” silliness. She really wants to wear a hijab to identify with and show solidarity to Muslim women? A symbol of oppression, misogyny, and second class citizenship? Get real Hawkins. Any genuine Christian would want to see Muslim women liberated and emancipated from their enslavement, not stand with them and celebrate their wretched condition.

And other women have weighed into all this, including Christian women living in the Middle East. One recent article presents a number of these women and their views:

A female professor at a private Egyptian university explained that many of her Muslim friends feel pressured to wear the hijab to look like good Muslims, adding that hijab-wearing is a “sign of societal and cultural oppression” dating back to the Ottoman empire. Saudi Arabia and Iran are now pressuring the Muslim world to normalize the practice everywhere. It’s a type of religio-culture imperialism. My friend continued: “Nearly all, including the veiled women I know, acknowledge that hijab isn’t mandated in the Qur’an.” Regarding Hawkins’s hijab-wearing, the professor concluded, “I think her effort is misguided since in this particular case she’s siding with the oppressor, not the oppressed.”

Or consider the words of a professional woman in Egypt who explained:

The hijab in the eyes of Christians, and even some moderate Muslims, is a symbol of the imprisonment of women behind the distorted image of women in Islam. . . . Wearing a hijab to show support to Muslims in the Wheaton community is not a proper way of showing social support, but rather an indication that Christians don’t have issues with Islamic faith in general and to the hijab issue in particular – something we’d have a real problem accepting.

And an Egyptian anthropologist put it this way:

If [Hawkins] is concerned about the cause of the oppressed, there are many Christian and non-Christian organizations she can join that are really bringing change to people’s lives. Many such organizations are working with Middle Eastern refugees at different campsites. Our focus should be on such groups – Yazidis, Christians, Alawites, and moderate Muslims—who are experiencing genocide. My wife went to a refugee camp in Jordan this past summer to serve these groups who are literally stripped of their dignity. . . . Egyptian and Middle Eastern Christians have their own concerns and hardships. This type of gesture [wearing a hijab] is viewed as a form of empty propaganda; we call it shi‘arat in Egypt.

Women have of course long complained about these head-coverings as symbols of oppression, well before the Wheaton prof came along. In her vitally important volume on how women are treated in Islam, Egyptian-born Nonie Darwish offers us an eye-opening account of what life is like for such women.

I reviewed her book Cruel and Usual Punishment here: https://billmuehlenberg.com/2009/06/24/a-review-of-cruel-and-unusual-punishment-by-nonie-darwish/

As to head coverings she says this:

Muslims use the words nikab, burqa, or hijab to basically mean the same thing. In Arabic hijab literally means ‘a barrier or veil’ because it hides the face of a woman. But that is not all that it does; by covering the face and identity, the nikab also adds to the alienation and loneliness of Muslim women. What seventh-century Bedouin women needed to wear to have a small sense of privacy has become a shield of isolation and symbol of subjugation in the twenty-first century.

Islam dictates that a man must command obedience from his women, from his wives and daughters and they must submit to him…This belief is part of a larger one – that individuals don’t matter, that their choices and desires are meaningless, particularly if the individuals are women. This sense of honor and male entitlement drastically restricts women’s choices. A whole culture and its religion weigh down every Muslim but the heaviest weight falls disproportionately on women’s shoulders…The Muslim veil, the different sorts of masks and beaks and burkas are all gradations of mental slavery…The veil deliberately marks women as private and restricted property, non-persons…It restrains them, confines them, grooms them for docility. A mind can be as cramped as a body can be.

Let me finish with the words of another woman, discussing another case of Western women putting on these Islamic head-coverings:

It’s rather extraordinary that those within the council were taken aback by the scathing public response; what else did they expect? Did they think empowered western women would embrace the idea of donning Muslim headscarves and subjugating themselves in the name of diversity?
Indeed why stop at headscarves? If the City of Greater Dandenong is really serious about embracing the cultural and religious practises of other countries then why not encourage women not to drive for three hours to raise awareness and insight about the rich culture of Saudi Arabia.
Or perhaps a celebration of sharia law involving an adulteress being flogged in the city square? Or why doesn’t the council employ moral police armed with long canes who can whip women for showing too much hair or skin?
That might familiarise the locals with what happens in parts of the world where hijabs are compulsory. I wonder how women who fled countries that require them to cover up feel about local government encouraging women to wear hijabs? It was only late last year when women in Iran were disfigured and blinded in acid attacks for daring to contravene the country’s strict hijab code.
Shouldn’t we stand with disempowered women in Islamic countries across the world instead of celebrating an instrument that is used in their suppression? For many the hijab, along with the dehumanising niqab and burqa, are symbols of oppression not some national costume to be worn for kicks and giggles.

All these female voices could be multiplied many times over. And quite a few of them are Muslim women, or former Muslims. They all stand resolute in their opposition to clueless Western dhimmis who put on this symbol of oppression as a means of identifying with Muslims.

For heaven’s sake, why not identify with their liberation, not their subjugation?

6 Replies to “Islam, the Hijab, and Clueless Westerners”