OK, I admit it: I really love Heidi Mund. Well, let me rephrase that: I love my wife, but I think Heidi Mund is one of our superstar Christians. She makes most believers look like spineless wonders. She is a German Christian who puts most Christians to shame. She is willing to stand up for Jesus Christ in the face of a tsunami of political correctness and Islamophilia.

I have written about brave Heidi before. As I wrote in a 2014 piece: 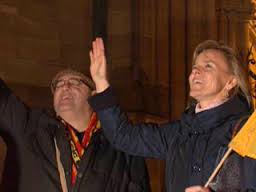 Let me quote parts of a recent piece on her: “Islam continues to grow in power and influence across Europe. But at a recent concert in Germany, one Christian woman decided to stand up to it. ‘The Armed Man: A Mass for Peace’ by Welsh composer Karl Jenkins was supposed to be an interfaith event to bring Christianity and Islam together.
“But when the Muslim imam began his call to prayer during the concert, he was interrupted by a small woman in the balcony proclaiming that ‘Jesus Christ alone is Lord of Germany,’ and shouting, ‘I break this curse.’ She also invoked the name of Martin Luther and warned the audience that what was happening was ‘a lie’.”
Hey, that alone tells me she is my kind of woman. Indeed, she is more of a man than most men I know of. Finally someone with guts and conviction, willing to face hostile, deceived mobs to speak the truth. But wait, there’s more:
“It happened on Nov. 10, 2013, at the Memorial Church of the Reformation in the Rhineland city of Speyer, built to honor Martin Luther. It isn’t just any church. It’s a monument to the Protestant Reformation and a memorial to the spiritual transformation of Germany.
“It was at this spiritual landmark that a Muslim imam was invited to give the call to prayer. When the brave German woman, whose real name is Heidi Mund, heard about the event, she prayed. ‘I was asking Jesus, “Lord, shall I go there?” So, when I have to drive one and half hours, you know, I think, “Is it worth it to go or can others go?” So, this is human laziness, yeah?’ Mund recalled.
“She grabbed her German flag emblazoned with the words ‘Jesus Christ is Lord’ and headed for the concert, still not sure what she would do when she got there. ‘Until the imam started with his shouting, I did not really know what to do. I was just prepared for what God wants me to do,’ she told CBN News. Then the Muslim call to prayer began, and Heidi said she felt something rising up inside her.
“‘I would call it a holy anger,’ she recounted. ‘And then I rose with my flag and I was calling and proclaiming that Jesus Christ is Lord over Germany.’ ‘My purpose was, I broke this curse because [Muslims] say, “Only Allah is the Lord. He is God, the only God.” And I broke this curse in this church and I broke it over my country,’ she continued.
“And she repeated the words of Martin Luther in 1521 after he refused to recant his faith in scripture alone: ‘Here I stand. I can do no other’ and ‘Save the church of Martin Luther!’ Video shows another concert-goer trying to calm her by saying, ‘This is a concert for peace.’
“Mund can be heard responding in German, ‘No it’s not! Allahu Akbar is what Muslims scream while murdering people! Don’t be fooled! Don’t be fooled! This is a lie!’ She was thrown out of the church.” And she was a hundred per cent correct to compare the rise of Islam in Germany with the rise of Nazism.

I said back then that she has more courage and Christian conviction than most Christians do. As I wrote:

Wow, what a woman. Amen and amen. Just imagine if we had 100 more Christian champions in the world like her. With that kind of Holy Ghost firepower we could do tremendous things for Christ and the Kingdom. But sadly our churches are packed full of weenies, whiners and woosies.
Perhaps never before in church history do we have so many invertebrate Christians on the planet – at least in the West. I suspect that 95 per cent of believers today would never open their mouths in this way in defence of their faith and their Lord.
They are instead gutless wonders who live in fear: fear of what others might think; fear of being criticised; fear of offending people; fear of being seen as controversial and intolerant; fear of rocking the boat. Well, such cowards have no place in the church of Jesus Christ.
We are in desperate need for a million more Heidis. Lord raise them up please. Replace our wimps with warriors and our cowards with courageous saints. Oh God, raise up an army of anointed, Holy Ghost-empowered warriors who will never fear man but only fear you.

Well it seems that brave Heidi is now being accused of sedition in Germany. Really! A rather bad Google translation of a German newspaper article says this:

Since Heidi Mund has shifted its political agitation of the street to the internet, hardly a day goes by without a message to their followers. The former lead singer of the “free citizens” and “Pegida Rhein Main” has this another distributor – “Save Europe” – founded, it has been explicitly set a goal to save Germany from Islam.
For Day of German Unity mouth had called for a human chain around Germany, to resist “as a spiritual wall …, and with the” authority of God “the” forces of darkness “.
“Hand in hand, praying for our country” called the radical Christin their manual for that act of resistance, which took place on 3 and 4 October with moderate involvement – and followed on those already on 4 October an indication of private against Heidi mouth , Their “prayer suggestions” correspond to the requirements of sedition, is the display.
It calls to prayer and calls, among other things:
“We pray for the genuine refugees that they get renewed hope for their lives, that our Lord comforts her, …, against the mass immigration of 90% of young Muslim men who want to build their own home countries and here not our girls and women raped; that it with the Word of God – to be sent back to their home countries, where they belong – the Bible. … Against diseases and epidemics, which have brought immigrants… We ask God … to Angel, which it places on the borders of Germany and the other European countries.”

Pamela Geller picks up the story in much better English:

Heidi Mund, a Christian activist, has been accused of agitation of the people towards violence. She did no such thing. Heidi Mund spoke out against Muslim prayer in a Christian church (see video below). If this woman is imprisoned, it marks a turning point for Germany. What she says here is true. Criminalization of truth. This marks a true turning point if this woman is arrested. During the Nazi regime there were three stages that took place:
1) it became dangerous to speak out the truth
2) people started losing their jobs, faced fines and prison for their views
3) people with opposing views were killed…I think we are beginning to see stage 2 in Germany and to a slightly lesser degree here in the US.
Mund is now being charged with Volksverhetzung – agitation of the people towards violence. She could be fined perhaps or imprisoned but the intention is to silence criticism of Islam. Sharia for Germany.
Instigation/Agitation of the masses according to paragraph 130 of the criminal law book: A “Volksverhetzer” – One who is able to disturb the public peace and carries a sentence of 3 months to 5 years. If Germany is serious in prosecuting hate speech (there’s a ban on Mein Kampf), then Merkel better start closing down mosques and banning the Quran.

So this champion saint faces the prospect of imprisonment for simply speaking truth about Islam. Such is the madness that now prevails in the West. Those calling for the death of infidels are now a protected species, while those who warn about the war against freedom, democracy and Western values are treated as criminals.

This is where the West is now at, and it sure ain’t pretty. Please pray for dear Heidi. She is one of our few Christian warriors who will never cower before the PC losers running our countries. She is a champion and she needs our support.

Please uphold her during this time, and please ask God to give you a bit of Holy Ghost boldness before it is too late.

It is not just Germany that is prosecuting Christians for speaking the truth about Islam. America is no better, as this article makes clear:

December 17, 2015 ought henceforth to be a date which will live in infamy, as that was the day that some of the leading Democrats in the House of Representatives came out in favor of the destruction of the First Amendment. Sponsored by among others, Muslim Congressmen Keith Ellison and Andre Carson, as well as Eleanor Holmes Norton, Loretta Sanchez, Charles Rangel, Debbie Wasserman Schultz, Joe Kennedy, Al Green, Judy Chu, Debbie Dingell, Niki Tsongas, John Conyers, José Serrano, Hank Johnson, and many others, House Resolution 569 condemns “violence, bigotry, and hateful rhetoric towards Muslims in the United States.” The Resolution has been referred to the House Committee on the Judiciary.
That’s right: “violence, bigotry and hateful rhetoric.” The implications of those five words will fly by most people who read them, and the mainstream media, of course, will do nothing to elucidate them. But what H. Res. 569 does is conflate violence — attacks on innocent civilians, which have no justification under any circumstances – with “bigotry” and “hateful rhetoric,” which are identified on the basis of subjective judgments. The inclusion of condemnations of “bigotry” and “hateful rhetoric” in this Resolution, while appearing to be high-minded, take on an ominous character when one recalls the fact that for years, Ellison, Carson, and his allies (including groups such as the Hamas-linked Council on American-Islamic Relations, CAIR) have been smearing any and all honest examination of how Islamic jihadists use the texts and teachings of Islam to incite hatred and violence as “bigotry” and “hateful rhetoric.” This Resolution is using the specter of violence against Muslims to try to quash legitimate research into the motives and goals of those who have vowed to destroy us, which will have the effect of allowing the jihad to advance unimpeded and unopposed.

All over the West Islam is being elevated, celebrated and given preferential treatment, while Christians who speak words of warning about it are treated as dangerous criminals. So this is how the West ends.

14 Replies to “Stand With Brave Heidi Against Creeping Sharia”