Hey, it’s a free country, so I can say what I like! While some will go ballistic over this, that is fine – they can set up their own website and write whatever they want. But here are some random thoughts on the US elections, and the Republican frontrunner Donald Trump. Much of it is based on countless discussions and debates with hard-core Trumpites:

-I fully understand that Christians and conservatives are getting real disillusioned with both main parties, with the Washington establishment, and are looking for someone different. They think Trump might be the man to turn things around. I used to feel the same way, but regrettably the more I learn about Trump, the less likely it seems I can support him. Especially when there still are other good candidates out there.

-“I’d rather be ruled by a wise Turk than by a foolish Christian.” This is a saying attributed to Martin Luther (but not tracked down). I agree – I do not insist that we have a Christian running for POTUS. I would willingly vote for a principled, constitutional conservative who is not a believer over a lefty, unprincipled believer, if need be. 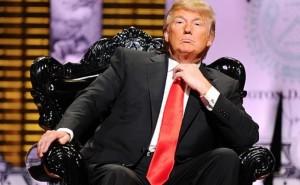 -Trump is not a Christian, but he is also not a conservative. Not even close. These two facts alone should deter Christians and conservatives from voting for him.

-Christian Trumpites get mad at me when I refer to them as Trumpbots. But when they jettison all the clear biblical teachings about righteousness exalting a nation, the need for godly leadership, warnings against arrogant rulers, and the like, and replace it all with a delusional faith in a pagan messiah, then yes, they are robots – and worse. I expect this from pagans, but not from those who profess to be disciples of Jesus Christ.

-Perhaps the real story of the rise of Trump is not the great dissatisfaction in the electorate, the sad state of the two main parties, etc, but this: the willingness of so-called Christians to sell their souls for a pagan would-be messiah. They abandon all biblical principles on the issues of leadership, righteousness and godly rulers, and trade it all in for the porridge of an arrogant, immoral celebrity.

-Nine times out of ten when I ask Trump supporters why we should support him, all they can offer is his claims on immigration, building a wall, etc. But given that Trump is a lifelong liberal and Democrat supporter who is pro-abortion, pro-homosexual, and thinks little of the Constitution, what good is a wall? If he will destroy the country from within, a wall won’t mean beans.

-Trump changes his views more often than he changes his shirts (or wives), so why should we believe him on anything he says? He is all over the place, and tells people what they want to hear.

-The surest way of getting Hillary elected is to have Trump running against her. All the polling shows Clinton beating Trump, but losing to Cruz.

-It is the GOP establishment which is primarily responsible for the rise of Trump. It is their fault by pushing RINOs and moderates for so long, frustrating the wishes of real conservatives and real Republicans.

-If it gets to Trump vs either Hillary or Bernie then maybe and very reluctantly I would vote for Trump. Maybe. I hope it does not get to that place however. And as each day goes by, and we learn more and more about Trump, I am less likely to vote for him.

-If it does get down to Trump vs either Hillary or Bernie, then I really do feel that God has given America over, and it is judgment time.

-Trump is the ultimate politician: he tells people exactly what they want to hear. He does not have a single principle to run with – except himself. Money, sex and power seem to be his main gods.

-One Trumpite admitted: ‘I think a lot of folks know he isn’t a conservative but are still voting for him’. That is the problem. I expect both conservatives and Christians to care that he is not. Anybody can be ticked off, lash out, and go for someone who spouts a lot of anti-establishment rhetoric. Sanders is spouting that too for heaven’s sake! But that has never been enough.

-Now more than ever we need a leader who is a principled, constitutional conservative, a person of character, integrity, humility, principle and conviction, and someone who cares not just about the nation, but the one who establishes the nations. Trump of course is none of that. He cares only about one thing: himself.

-At the end of the day, a Trump imperial presidency may be just as bad as anything Hillary or Bernie can do to the nation. That is why I am urging people to run with someone we need now, like a Cruz, before it is too late.

-All this talk by Trumpites about what a heroic outsider he is is a lot of baloney. He is the biggest insider around, hobnobbing with the Clintons, with Democrats, with snooty celebs, with leftist Hollyweirdians, with aloof elitists, with rich and famous lefties, etc. He has nothing whatsoever to do with the common man. He is the biggest Establishment player around.

-America is basically lost because American Christianity is basically lost. When you have millions of so-called evangelical Christians supporting the most arrogant, egotistical, immoral, pagan, foul-mouthed, narcissistic, ruthless, megalomaniac demagogue candidate going – especially when we still have real conservatives and Christians running – then you know the gig is up and America is toast.

-Why do I feel that we are back in Germany in the ‘30s again, with millions of hysterical Christians hyperventilating about ‘making the country great’? We have heard all that before. It seems we learn nothing from history.

-The idiotic claim that it does not matter what your policies are as long as you “strengthen” America would fit perfectly well with a demagogue like Hitler: ‘Just blindly trust me, just elect me – I won’t give you any policy specifics, or any clues as to what I will do, but you know I will “make the nation great again”.’ That is the stuff of dictatorship, not freedom and principled conservatism.

-Hitler came in on a wave of populism, national discontent, and making grandiose promises. Trump seems to be following in similar style. Philosopher and law professor Robert George recently said that this is a very precarious place to be in: “The danger to republics is that they will fall to demagogues. The vulnerability is greatest when a republic is in a state of moral decay.”

-National security, securing the borders and the like are all quite important, but they are not the only issues facing America. To say we can just ignore or minimise all the other weaknesses and downsides of Trump reminds me of similar sentiments uttered 75 years ago. When Hitler met with the Lutheran pastor Martin Niemoller and other clergy, he shouted at them: “I will protect the German people. You take care of the church. You pastors should worry about getting people to heaven and leave this world to me.” That was diabolical advice then, and it is today as well.

-It is ludicrous in the extreme to suggest that immigration is the only problem facing America, and if that gets fixed, then everything else will just be rosy. Not only are there many other major problems – most of which Trump will never touch, or will make worse – but we already have principled conservatives and Christians who are running who will deal with these problems, including immigration.

-When you have known RINOs and moderates like Christie supporting Trump, what does that tell you about Trump? It tells you everything we need to know.

-I am asked if someone like Cruz can be guaranteed to lead America the way we want him to. One could ask that about anyone: there is never a foolproof guarantee for anyone or anything in a fallen world. All we can do here is carefully assess a candidate, his record, his history, his career, his voting record, his words, and so on, and make a judgment based on that. I see nothing whatsoever in all this about Cruz that has me worried at the moment. Does that mean he is perfect? No, there are no perfect candidates. Does that mean he will never disappoint in the days ahead? No. But of the remaining Republicans, he comes closest to what I want as both a Christian and a conservative.

Much more can and will be said about the election, Trump, Cruz and related issues in the coming days. So stay tuned.

34 Replies to “Some Home Truths on America, Trump and the White House”