Plenty of debate actually arises over the issue of the monarchy in ancient Israel. Especially when we see imperial presidencies like Obama’s in America (Trump’s could well be the same if he gets in), Christians are now talking a lot about the pros and cons of having a king.

And many of them have mentioned passages like 1 Samuel 8. In that passage we read about how the Israelites demanded a king, and what Yahweh and the prophet Samuel thought about the idea. In verses 4-9 we read this:

So all the elders of Israel gathered together and came to Samuel at Ramah. They said to him, “You are old, and your sons do not follow your ways; now appoint a king to lead us, such as all the other nations have.” But when they said, “Give us a king to lead us,” this displeased Samuel; so he prayed to the Lord. And the Lord told him: “Listen to all that the people are saying to you; it is not you they have rejected, but they have rejected me as their king. As they have done from the day I brought them up out of Egypt until this day, forsaking me and serving other gods, so they are doing to you. Now listen to them; but warn them solemnly and let them know what the king who will reign over them will claim as his rights.”

In the next nine verses Samuel warns them about what exactly this will entail. The chapter finishes this way (vv. 19-22):

But the people refused to listen to Samuel. “No!” they said. “We want a king over us. Then we will be like all the other nations, with a king to lead us and to go out before us and fight our battles.” When Samuel heard all that the people said, he repeated it before the Lord. The Lord answered, “Listen to them and give them a king.” Then Samuel said to the Israelites, “Everyone go back to your own town.”

So it sounds like having a king was a really bad idea, and not at all God’s idea, although he seems to have allowed it. But that is not the end of the matter. We actually have a number of other passages which speak not unfavourably about Israel having a king. Often in the Pentateuch we find this. For example both Abram and Sarai were told this:

Other texts include Gen. 35:11; Gen. 49:10; Ex. 19:6; Num. 24:17-19. And in 2 Samuel 7:1-17 and 23:5 we read about how Yahweh entered into a covenant relationship with King David. As Old Testament scholar Eugene Merrill comments, “kingship was foreseen as early as patriarchal times, and unless one posits that such early references are also late redactions, it is clear that there was preparation for Israelite monarchy in both tradition and theology.”

One of the most important texts on this issue of a king is Deuteronomy 17:14-20:

When you enter the land the Lord your God is giving you and have taken possession of it and settled in it, and you say, “Let us set a king over us like all the nations around us,” be sure to appoint over you a king the Lord your God chooses. He must be from among your fellow Israelites. Do not place a foreigner over you, one who is not an Israelite. The king, moreover, must not acquire great numbers of horses for himself or make the people return to Egypt to get more of them, for the Lord has told you, “You are not to go back that way again.” He must not take many wives, or his heart will be led astray. He must not accumulate large amounts of silver and gold. When he takes the throne of his kingdom, he is to write for himself on a scroll a copy of this law, taken from that of the Levitical priests. It is to be with him, and he is to read it all the days of his life so that he may learn to revere the Lord his God and follow carefully all the words of this law and these decrees and not consider himself better than his fellow Israelites and turn from the law to the right or to the left. Then he and his descendants will reign a long time over his kingdom in Israel. 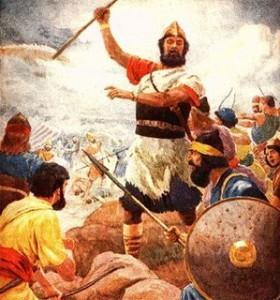 So how do we reconcile this? Is Scripture being schizophrenic here? Not really. That Israel would have a king was long planned for and expected. How it would get a king and what sort of king he would be is another matter. It is all about godly and God-appointed leaders, and those who are not.

John Woodhouse has as a subtitle for his expository commentary on 1 Samuel, “Looking for a Leader”. The biblical book is a transitional one, between the time of the judges and the monarchy in Israel. He discusses the sort of leadership Yahweh was looking for:

[Israel’s] need was not for a great military hero or genius. God had demonstrated unambiguously that he could deal with their enemies without such a champion. Their need was not for a brilliant political giant who could organize the nation efficiently. Israel’s need could not be met by management abilities. Israel’s great need was a leader who would bring them back to God. They needed a leader who would lead them in righteousness. They needed a Samuel. And God gave them Samuel!

But the Israelites quickly forgot that lesson as they demanded a king like Saul. In doing this they were abandoning the Lord. Says Woodhouse:

It is important to understand that the problem with the elders’ proposition was not kingship as such. . . . The great weight of the criticism of the elders’ request arose from the phrase, “like all the nations.” The proposal was anticipated centuries earlier in the laws given by Moses in Deuteronomy 17. . . . The elders were asking, in effect, to opt out of the covenant with the Lord to adopt a pagan model of being a nation.

Chris Wright, in discussing the Deuteronomy 17 passage, puts it this way:

This section, therefore, is permissive rather than prescriptive legislation. It does not command monarchy but allows for it. . . . Clearly the issue is not merely if Israel should have a king or not, but what kind of king that should be. What matters fundamentally for Deuteronomy is whether or not the whole covenant people of Israel will remain wholly loyal to Yahweh their God. The value of a king is assessed solely by the extent to which he will help or hinder that loyalty.”

Or as Bill Arnold comments: “It is true that Yahweh was not opposed to an Israelite monarchy. Rather, he was opposed to the kind of monarchy Israel is now demanding! She wants a king like the nations around her, a kingship that will bring her power and political influence.”

And again: “The problem with Israel’s demand in 1 Samuel 8 is not the fact that they want a king, but that they want a king now! They are wrongly motivated, but they are also selfishly driven to settle for something less than Yahweh’s timing, even after Samuel’s stern warnings about the consequences (8:11-17).”

Because of all this, Saul was just not going to cut it. The idea of kingship was not wrong per se, but the choice of Saul was. As Daniel Block points out, “Saul’s rule was doomed from the beginning. Ultimately he served as a foil for the one Yahweh had in mind from the beginning, the man after Yahweh’s heart (1 Sam. 13:14).”

So we see some ambivalence here in Scripture on this issue. The choice of Saul was displeasing to Samuel and to God, and it led to trouble big time. But the idea of a human king in right relationship to the heavenly king was not out of line, as David was to later demonstrate.

This was certainly true of the one true King, even as he entered the world in a cradle in a manger. And why does all of this not seem like important advice, even for Americans in a presidential election year?

7 Replies to “Was Ancient Israel Meant to Have a King?”