With the push for the legalisation of euthanasia being made throughout the West, Christians need to think carefully and biblically about this issue. My forthcoming book, The Challenge of Euthanasia, will certainly offer plenty of detailed argumentation – both biblical and secular – against this.

The issue of suicide is of course a major part of this whole debate. For the believer, we need to see what Scripture has to say about the subject. Critics will point out that the Bible does not say too much about suicide. However it does offer a number of cases of suicide, and all are viewed in a very dim light indeed.

The first case is that of the wicked ruler Abimelech (Judges 9:50-56). Another case involves Ahithophel, a traitorous counsellor to David (2 Samuel 17:23). A third case involves Zimri, an evil king (1 Kings 16:15-20). The fourth clear case, one that is that of Saul who the Lord had abandoned (1 Samuel 31, and 2 Samuel 1). A fifth Old Testament case might be mentioned, but it really runs in tandem with the death of Saul: his armour-bearer who also fell on his sword (1 Samuel 31:5). 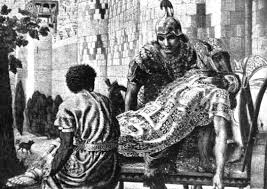 Another possible case of suicide might be that of Samson as found in Judges 16:30. But it is certainly not clear that he intended to end his life as such. This seems to have been an unintended consequence of wreaking revenge on his (God’s) enemies.

But from all these cases we find people who were said to be evil or out of God’s favour committing an act which has no biblical endorsement. So from these episodes alone we draw no support nor approval for suicide. I will examine these cases at length in my new book, but I have spoken to them in some detail here as well: billmuehlenberg.com/2006/09/14/suicide-a-biblical-assessment/

Thus there are no Scriptural passages which can be appealed to in support of suicide. Interestingly, the Christian church, with very few exceptions, has seen suicide as sinful, from the earliest times through to today. Augustine and Aquinas for example said that suicide was worse than murder, because at least the murderer can turn around and repent, whereas the one who commits suicide cannot.

Moreover, Christians have almost always seen suicide as a personal affront to the sovereignty of God in the affairs of human life. And it is not just Christianity that has condemned suicide. The pre-Christian Hippocratic Oath, for example, also condemns not only suicide but euthanasia as well.

Other arguments can be brought forth in the attempt to justify suicide. However, none of them, it seems to me, are really convincing. For example, one might raise the issue of heroic self-sacrifice, such as when a soldier jumps on a live hand grenade in order to save his companions. But this should not be seen as suicide however. The intent was not to kill oneself, but to save others. In suicide one’s intention is to kill oneself.

Nor is martyrdom to be equated with suicide. If someone dies for his beliefs (such as a Christian martyr), he is remaining faithful to Christ, even at the cost of his or her own life. Again his intention is not to take his or her life, but to be willing to die for his faith. (The case of radical Muslim suicide bombers does however seem much more like suicide – with the promise of paradise and dark-eyed virgins at the other end. But that is another discussion.)

In the end we must come down on the Biblical side of the debate. Emotions and particular cases of course cannot be dismissed altogether, but neither should they take precedence when we consider these weighty issues. Our final authority on all such matters must be the revealed word of God, not the latest social theories or tragic personal stories.

Vernon Grounds summarises the longstanding opposition to suicide in Christian thought. It rests

upon an extrapolation from the Sixth Commandment, “Thou shall not kill” (Exod. 20:13; cf. Gen. 9:6). Human life is God’s sovereign gift. Crassly stated, it is his property; and, as divinely bestowed, it is of measureless though not absolute value. Only God, consequently, is entitled to determine when and how life is to end. Thus its termination, whether by illness or old age or accident, is under his providential control.

He notes some exceptions, such as martyrdom, and then continues: “But, aside from a few cases of these sorts, to end one’s life intentionally is to be guilty of lese majesty, rebelliously usurping God’s prerogative.”

A piece written a few years ago by Emily Esfahani Smith offers some historical perspective on these matters. She states:

In my column last October, I pointed to research—from Durkheim and modern social science—showing that the rise of suicide has been accompanied by a rise in individualism. The role of the individual in society has changed dramatically since the Enlightenment. Before, the influence of the Judeo-Christian tradition in the West placed moral constraints on an individual’s will. Morality was organized around God’s will and our duties to the community—and suicide was considered an affront to both. Today, though, our sense of right and wrong is organized more around the individual’s experience than on the health of the community.

Our attitude toward suicide says a lot about how we value life and the communities that sustain us. It shouldn’t surprise us that suicide has gained acceptance in our culture; our communities are dissolving, and the individual, free from many of the traditional constraints, is considered the master of his own fate. Though there are certainly cases when death is justly considered a deliverance from suffering, it’s time to reconsider our belief that, as individuals, we are free to choose the time and place of that deliverance. As Hecht writes, “The meaning of life is bigger than the individual.”

Let me finish with the wise words of renowned Christian thinker and apologist G. K. Chesterton. In his classic 1908 volume Orthodoxy he says this about suicide:

Not only is suicide a sin, it is the sin. It is the ultimate and absolute evil, the refusal to take an interest in existence; the refusal to take the oath of loyalty to life. The man who kills a man, kills a man. The man who kills himself, kills all men; as far as he is concerned he wipes out the world….
Obviously a suicide is the opposite of a martyr. A martyr is a man who cares so much for something outside him, that he forgets his own personal life. A suicide is a man who cares so little for anything outside him, that he wants to see the last of everything. One wants something to begin: the other wants everything to end. In other words, the martyr is noble, exactly because (however he renounces the world or execrates all humanity) he confesses this ultimate link with life; he sets his heart outside himself: he dies that something may live. The suicide is ignoble because he has not this link with being: he is a mere destroyer; spiritually, he destroys the universe.

Of course for those who have lost loved ones or family members to suicide we need to offer them our prayerful support and sympathy. But at a time when legalised euthanasia is being promoted so intensely, we must resist the agenda of the death lobby and reaffirm biblical truth in this important area.

4 Replies to “Christianity and Suicide”