One of the most tragic things any believer can do is to refuse to trust in God but instead put all one’s faith and hope in mere men. This is a perennial temptation for God’s people, and the Bible speaks to it often. The Old Testament for example is full of warnings against it, and frightening examples of it.

Often the kings of Israel were tempted to form unholy alliances with pagan kings for security and protection, instead of trusting in Yahweh alone. This was warned against early on in Israel’s history. For example we find this in Exodus 23:31-32:

“I will establish your borders from the Red Sea to the Mediterranean Sea, and from the desert to the Euphrates River. I will give into your hands the people who live in the land, and you will drive them out before you. Do not make a covenant with them or with their gods.”

Then the Lord said: “I am making a covenant with you. Before all your people I will do wonders never before done in any nation in all the world. The people you live among will see how awesome is the work that I, the Lord, will do for you. Obey what I command you today. I will drive out before you the Amorites, Canaanites, Hittites, Perizzites, Hivites and Jebusites. Be careful not to make a treaty with those who live in the land where you are going, or they will be a snare among you.” 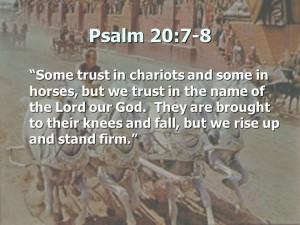 Plenty of Psalms speak to this as well:

The prophets also spoke to this often, for example:

-Isaiah 31:1 Woe to them that go down to Egypt for help; and stay on horses, and trust in chariots, because they are many; and in horsemen, because they are very strong; but they look not unto the Holy One of Israel, neither seek the LORD!
-Jeremiah 17:5-8 This is what the LORD says: “Cursed is the one who trusts in man, who depends on flesh for his strength and whose heart turns away from the LORD. He will be like a bush in the wastelands; he will not see prosperity when it comes. He will dwell in the parched places of the desert, in a salt land where no one lives. “But blessed is the man who trusts in the LORD, whose confidence is in him. He will be like a tree planted by the water that sends out its roots by the stream. It does not fear when heat comes; its leaves are always green. It has no worries in a year of drought and never fails to bear fruit.”

In the narrative portions of the OT we find too many sad examples of this. Consider just one, involving King Asa as recorded in 2 Chronicles 16:1-10

In the thirty-sixth year of Asa’s reign Baasha king of Israel went up against Judah and fortified Ramah to prevent anyone from leaving or entering the territory of Asa king of Judah. Asa then took the silver and gold out of the treasuries of the Lord’s temple and of his own palace and sent it to Ben-Hadad king of Aram, who was ruling in Damascus. “Let there be a treaty between me and you,” he said, “as there was between my father and your father. See, I am sending you silver and gold. Now break your treaty with Baasha king of Israel so he will withdraw from me.” Ben-Hadad agreed with King Asa and sent the commanders of his forces against the towns of Israel. They conquered Ijon, Dan, Abel Maim and all the store cities of Naphtali. When Baasha heard this, he stopped building Ramah and abandoned his work. Then King Asa brought all the men of Judah, and they carried away from Ramah the stones and timber Baasha had been using. With them he built up Geba and Mizpah. At that time Hanani the seer came to Asa king of Judah and said to him: “Because you relied on the king of Aram and not on the Lord your God, the army of the king of Aram has escaped from your hand. Were not the Cushites and Libyans a mighty army with great numbers of chariots and horsemen? Yet when you relied on the Lord, he delivered them into your hand. For the eyes of the Lord range throughout the earth to strengthen those whose hearts are fully committed to him. You have done a foolish thing, and from now on you will be at war.” Asa was angry with the seer because of this; he was so enraged that he put him in prison. At the same time Asa brutally oppressed some of the people.

This is a very damning indictment of those who turn away from the Lord and put their trust in men. It is a dangerous and losing policy every time. As Leslie Allen comments:

Again crisis had been an opportunity to prove God but this time faith had been put in human aid. The wrong emergency button was pressed. The Chronicler seems to have in mind Isaiah 10:20, which speaks of relying (NKJV “depend”) on God instead of Assyria. Isaiah regarded reliance on foreign aid a besetting sin of the Judean monarchy (Isa. 30:1-2, 31:1) and Hosea had earlier berated the northern kingdom for this perversity (Hos. 7:8-12; 14:3). In God’s nation, where religion and politics were one, human expediency was a denial of true faith and a switch from God to humanity as the object of trust.

Of course modern nations today do not have the same covenant relationship with Yahweh as ancient Israel did. Thus I am not here saying it is always sinful when nations today align with other nations in various types of security pacts or treaties (NATO, eg). There may be a place for this, and at times it may be a wise course of action.

But nonetheless there are plenty of modern day applications to this. Christians of all people need to learn the lesson of trusting fully in God, and not in man. Way too often we look to human solutions to problems which only reliance on God can fix.

One of the most evident and tragic examples is right now the way those claiming to be Christians in America have come out in praise and support for their would-be messiah, Donald Trump. It has been quite shocking to behold these folks abandon all biblical principles simply to shrill for this guy who they really believe is God’s anointed one.

One of the reasons deluded Christians have been feverishly running with the immoral, arrogant, pagan fake conservative Trump is they have been bedazzled by the appearance of glitz and glamour, power and pride, anger and antagonism. All the things God clearly and absolutely condemns in anyone, especially in leaders, these carnal Christians seem to quite adore.

‘But he will make America great again’ they intone. ‘He will save America’ is their desperate mantra. ‘He is the one to save us and restore us’ they foolishly claim. As if any man can do all this. Only one man can do this, and he is not running for office.

The level of deception here has been astronomical. Many have come out and actually claimed that Trump is God’s anointed one, and all who resist Trump are resisting God! I kid you not. I even had one delusional guy tell me that Trump actually is King Cyrus, and he quoted Isaiah 45:1-7, but took out the name of Cyrus and put in the name of Trump!

Wow, talk about diabolical deception running amok in some Christian circles! This is staggering to behold. Satan is having a field day with these nutters. But these folks are 110% convinced Trump is God’s perfect chosen vessel to make America great again and save the world!

All this sounds exactly like a real good case of leaning on the arm of flesh, of trusting in men and not God, of forming ungodly alliances, and so on. The very thing the OT so strongly warned against we see on full display here. It is so appalling to behold. How have God’s people allowed such mass deception and foolishness to so easily ensnare them?

Thus the OT is not a set of outdated books by any means, but is fully relevant to today’s events. What we find there nicely illustrates and condemns the idolatry, madness and delusion we see among some believers today. And the remedy for this is the same today as it was back then: mighty heartfelt repentance and turning away from this despicable idolatry.

Only that will lead to America getting back up again, not an idolatrous reliance on an immoral pagan celebrity and con artist.

13 Replies to “Ungodly Alliances: Relying on the Flesh and Rejecting God”