Ten years ago English commentator Melanie Phillips wrote a very important book entitled Londonistan. It was a prophetic volume, a jeremiad against a sleeping England and an aggressive Islam. British self-loathing and loss of confidence coupled with advancing Islam is a recipe for disaster. As I wrote in my review of this vital volume:

Its thesis is that Britain has largely created a culture which breeds Islamic terrorism. British authorities have certainly done very little to discourage it, and in many ways have actually aided and abetted home-grown terrorism. Indeed, “London has become the epicentre of Islamic militancy in Europe”. That is, it has “become the major European centre for the promotion, recruitment and financing of Islamic terror and extremism”.
This book examines how and why this has happened. Two broad reasons are given: First, Britain no longer believes in itself, no longer cherishes its founding values, and no longer thinks it has a role to play in the world.
Second, British authorities have seriously misjudged the threat of Islamic terrorism. Therefore Britain is engaged in a policy of denial, appeasement, blaming itself, and hiding its head in the sand. These two major factors have led to London becoming the “hub of European terror networks”.

Let me offer just a few more quotes from the book:

Britain has become a decadent society, weakened by alarming tendencies towards social and cultural suicide. Turning upon itself, it has progressively attacked or undermined the values, laws and traditions that make it a nation, creating a space that in turn has been exploited by radical Islamism….
The attempt to establish this separate Muslim identity is growing more and more intense, with persistent pressure for official recognition of Islamic family law, the rise of a de facto parallel Islamic legal system not recognised by the state, demands for highly politicised Islamic dress codes, prayer meetings or halal food to be provided by schools and other institutions, and so on. No other minority attempts to impose its values on the host society like this. Behind it lies the premise that Islamic values trump British ones. 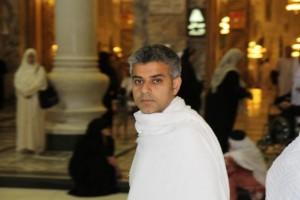 This was fully true a decade ago and it is even far truer today, especially after the first ever Muslim has just been elected as London’s mayor. This is a very significant and ominous development indeed. Here is how one news report discusses this development:

Sadiq Khan, a practicing Muslim and Labour Party politician, has been elected mayor of London, marking a political milestone in the Western world. Londoners voted in Khan, 45, as the first Muslim mayor of a major Western capital city. He will take office in a metropolis where his fellow Muslims comprise about 12% of the population. His victory followed an unusually bitter campaign against Conservative candidate Zac Goldsmith, the son of a billionaire, in which race and religion have proven ugly flashpoints.

During a heated parliamentary debate on Wednesday, British Prime Minister David Cameron accused Khan of sharing “a platform with an extremist who called for Jews to drown in the ocean” Labour Party leader Jeremy Corbyn in turn accused the Conservatives of “smearing” Khan. He said one of the men Cameron had accused Khan of sharing a platform with had also been close to Goldsmith….
The former human rights lawyer has also had to distance himself from Corbyn after a row over anti-Semitism. The Labour leader ordered an inquiry into charges of anti-Semitism after suspending Ken Livingstone, a political ally and a former London mayor, for saying Adolf Hitler had supported Zionism.

An incisive article just out speaks more to these very real concerns and is worth quoting from at length:

Kahn’s rise is a testimony to the fact that major sections of the city are already close to 50 percent Muslim, and critics say many of its non-Muslim residents seem comfortable with turning the top elected post over to a man with questionable connections to terrorists.
With most of the first round votes counted, the Labor candidate had a lead of around 9 percent over Conservative rival Zac Goldsmith. Voting came amid fresh accusations from London’s chief rabbi that the British Labor Party has a problem with anti-Semitism.
Khan was accused of being unfit to become London’s next mayor after footage emerged of him describing moderate Muslims of being “Uncle Toms.” Rabbi Ephraim Mirvis said Labor had a “severe” problem with anti-Semitism that would get worse if the party’s inquiry into the issue turns out to be a whitewash.
“This is part of the Islamization of Britain,” Pamela Geller, the activist-author of “Stop the Islamization of America” and editor of AtlasShrugs.com, told WND. Khan’s ties to so-called “radical Islamists” such as Yasser al-Siri, a convicted terrorist and confidante of the notorious preacher Yasser al-Siri, should give pause to any sane Briton, she said. When Conservative Prime Minister David Cameron exposed some of these ties on the Parliament floor, he was shouted down by chants of “racist!”
“That a man who has shared a platform with open Jew-haters could still be elected mayor of London is an indication of how far gone Britain already is,” Geller told WND. “In Sadiq Khan’s campaign, his opponents brought this up as a blot on his record. Soon enough in Britain, however, it will be a selling point for candidates appealing to an increasingly Muslim electorate.” Yet even as Cameron attacked Khan’s background and connections to “radical” Islam, the prime minister was advocating for the importation of more Syrian Muslim refugees.

Dr. Mark Christian, who grew up in Egypt the son of a Muslim Brotherhood father and became a child imam by the time he was 14 only to later renounce Islam and become Christian, said the rise of Muslim politicians in major European cities is inevitable given the brisk pace of Islamic migration. “This is definitely a historical event, a historic moment,” he said.
He noted that Cameron and Goldsmith, Khan’s opponent, have tried to connect Khan to “radical” Islam. That shows a fundamental misunderstanding of Islam and its long-term goals, Christian said. “The narrative that he is connected to radical Islam is by itself something the West invented, trying to differentiate between regular Islam and radical Islam. Islam is Islam,” he said. “The mindset of Muslims, whether Mr. Khan is devout or not, is such that he will be used by other Muslim leaders to accomplish things that have never happened through the sword.”
What’s happening in Britain is “civilization jihad” in action, Christian said, as defined by the Muslim Brotherhood in its 1991 “Explanatory Memorandum.” This document, seized by the FBI in 2004, laid out the Brotherhood’s plan to infiltrate Western societies and destroy them from within “by their own miserable hand and the hand of the believers.”
The Muslim Brotherhood is now deep into its strategy to infiltrate and deceive Western politicians into thinking they are the “good Muslims,” Christian said, the “peaceful Muslims.”
Khan, for instance, presents himself as a liberal-minded leader. He even confided in a speech that he secretly fears his two teenage daughters could be groomed to join ISIS. “When you look at what is happening in England, this has been building up for more than three decades now,” said Christian, who lived in Britain before emigrating to the U.S. “You have seen in the streets of England the rise of the real jihad, I would call it the violent kind of medicine. As the West has been subjected to Islamic violence and agitation, it has responded with political correctness, and the result is a Muslim mayor of London.”

Writing three months ago about the ever increasing Islamic demographics in the UK Robert Spencer wrote:

In five or ten more years, when there are majority-Muslim areas in Britain, do you think there will be beautiful multicultural harmony? Or do you think Muslims will be making increasingly aggressive demands for implementation of Sharia provisions? If you think the latter, you’re a greasy Islamophobe, and the British government hates you. You’re also correct.

We all know about bloody jihad, with bombs being detonated and heads being lopped off on a daily basis. But there are other forms of jihad, including what we call creeping sharia or stealth jihad. Taking over the UK and the West by force may be a daunting task, but it looks like taking it over from within is a walk in the park.
As Phillips wrote in the last two paragraphs of her book:

Britain is the global leader of English-speaking culture. It was Britain that first developed the Western ideas of the rule of law, democracy and liberal ideals, and exported them to other countries. Now Britain is leading the rout of those values, allowing its culture to become vulnerable to the predations of militant Islam. If British society goes down under this twin assault, the impact will be incalculable – not just for the military defense of the West against radical Islamism, but for the very continuation of Western civilization itself.
The West is under threat from an enemy that has shrewdly observed the decadence and disarray in Europe, where Western civilization first began. And the greatest of all is in Britain, the very cradle of Western liberty and democracy, but whose cultural confusion is now plain for all to see in Londonistan. The Islamists chose well. Britain is not what it once was. Whether it will finally pull itself together and stop sleepwalking into cultural oblivion is a question on which the future of the West may now depend.

Barring some sort of miracle, it now seems that we can say goodbye to London and the UK.

31 Replies to “Londonistan is Now Here”