Anyone who claims to be a follower of Jesus Christ must study. At the very least, we must daily read and study the Word of God. We must know what we believe and why, so that we can deal with any questions or doubts we might have, but also so that we may be able to answer others about our faith. 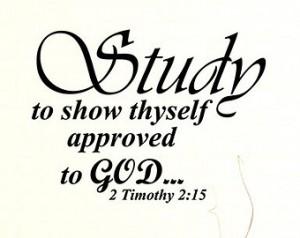 Peter said similar things in 1 Peter 3:15: “Always be prepared to give an answer to everyone who asks you to give the reason for the hope that you have.” Are you so prepared? Are you ready? If you were sitting on a train and the guy next to you starts asking you tough questions about your faith, would you be able to give him some solid answers?

Or would you just shrug your shoulders and say, “I dunno”. One day we will be held to account for every word we have spoken – and that may well include words we could and should have spoken, but did not. The world is starved for knowledge of the true and living God, and we – his representatives here on earth – are meant to deal with that dearth of knowledge.

We need to be ready to answer the honest questions of unbelievers with honest answers. If not, we are failing in our responsibilities as Christians. All believers are called to know basic Christian teaching and doctrine and be able to explain it to others.

In other words, we are all to be Christian apologists, at least to some extent. Christian apologetics has to do with defending the faith, clearing up misunderstandings, and answering questions people might have about the faith. We all should have a modicum of ability in this area.

Sure, there are some experts and specialists who do this as a full time ministry. Few of us will attain to their status. Most of us have different callings. But we still all have an obligation to be able to answer basic questions about what we believe, and deal with various challenges to our faith.

So we all have at least a mini role in being an apologist. With all this in mind I want to do two further things here. One, I want to give a few examples of apologists of various stripes in action. And then I want to make a personal plea on availing ourselves of existing resources which are out there.

-Nabeel Qureshi addresses a major problem raised by a devout Muslim in a public debate:

-Brigitte Gabriel, who grew up in Lebanon, gives a terrific response to a Muslim woman who claims that all Muslims are portrayed badly:

-Christian apologist Ravi Zacharias powerfully deals with a young atheist and his questions:

-Christian leader Michael Brown debates Piers Morgan and other lefties on the biblical view of homosexuality on CNN:

As is clearly evident, all these experts know what they are talking about. They are very well versed in a particular field, or perhaps in many fields. They have obviously studied like mad, read like mad, thought like mad, and have devoted their lives to the public defence of Christianity and biblical truth claims.

It will be noted that some were formerly of the position they are now refuting. For example Nabeel Qureshi is an ex-Muslim, so he is especially well-placed to debate other Muslims. While those who have been there and done that (eg., ex-homosexuals, ex-atheists, ex-Muslims, etc.) can really have a powerful testimony and effective ministry, this is not essential.

I have entire small libraries devoted to both topics. I have written hundreds of articles on both topics. I have studied to show myself approved. That is my calling and that I must do for the glory of God. Not everyone is called to such an apologetics task, or to a public ministry of defending truth.

But we all can be at least a little bit informed on the key issues of the day. And that leads me to my second main point, one which I have mentioned elsewhere. As I said, I have taken it upon myself to be as well-read as I can on a whole range of issues, so that I might more effectively proclaim truth in the public square.

So I know a little bit about many topics. And some other topics I know a fair amount about. Homosexuality is one such issue. To date I have penned three entire books on this issue (well, 2 ½ to be exact, since one is a co-authored debate book), and I have written no less than 682 articles on the issue.

So I guess you can say I have a small bit of expertise here. But something that happens on a regular basis which bothers me just a bit is this: I often will get folks who are rightly concerned about issues like homosexuality or other hot potato issues of the day, and they will come to me asking if I have any information on such topics.

Sometimes I wonder if they are pulling my leg! I will shake my head and wonder how poorly I must be communicating and getting information out there, if people can actually ask me if I have done anything on a topic like homosexuality! I don’t think I am hiding what I have done. Yet some folks seriously ask me to send them stuff on this and other issues.

In the old days before the Internet and before I had websites and books published, I would honour their requests by running to my many file cabinets, finding a bunch of good articles, photocopying them, and then faxing or mailing them off. A lot of work, but I always like to help equip others when possible.

But today I do have books available. Today everyone has access to the Internet. Today anyone can access my website, type in a search term on the top right box, and get exactly what they are looking for. Yet I still have people who think I should drop everything, answer their queries and provide them with some resources.

Um, those resources are already there! I don’t want to retype a response which I have already carefully and prayerfully covered in detail elsewhere, be it in book form or article form. I almost feel like asking these folks, “Why do you think I spent the last three plus decades working on these books and articles? Because I have nothing better to do?”

The truth is, 99 per cent of the questions people ask me are already answered carefully and with full referencing in my books and elsewhere. Why don’t they buy the books, read the books and use the material found therein to fight their own battles?

At the risk of tooting my own horn here, I would say this: if anyone is rightly concerned about the homosexual juggernaut steamrolling our faith, our freedom, and our families, a simple way to get on top of these things is to get my books, read them, underline the good bits if you need to, and have them available as a ready reference.

That way every time they get into a debate with someone they won’t have to come to me and plead with me to do their debate for them, take on their critics for them, and make their case for them. Sure I do this quite often anyway, but the simple truth is, I cannot fight everyone’s battles for them.

Please do not get me wrong: I am always happy to help out when and where I can. But I really believe that far too many believers are just lazy and being disobedient to the biblical command to ‘study to show yourself approved.’ We are not all called to be professional apologists and world class debaters.

But we are all called to represent Christ and his truth as best we can in our daily lives. And that entails a few things. So if you are unsure how to proceed here, let me clearly spell it out for you:

-Turn off the wretched TV and stop playing those lousy FB games for a start.
-Spend a bit of time every day studying about those issues you are concerned with, whether general biblical truths, or the controversial ethical issues of the day.
-Build up a small personal library with good apologetics and theology books.
-If you do not know what are the best books to get, I have spent over 40 years assembling bibliographies on all sorts of topics with the best books available. I am happy to point you in the right direction.
-Visit good apologetics websites and good Christian theology sites. Again, I can point you in the right direction here if need be.
-Do not whine about how you are not very smart or very gifted in such areas. As mentioned, while we are not all called to be experts and top-notch apologists, we are all called to use our brains for the glory of God. In fact that is exactly what Jesus said when he was asked what was the greatest commandment.
-So if you have been disobeying God by not using your mind for his Kingdom, then you need to repent and ask God afresh how he might use you for his work – mind included.

In conclusion, I strongly encourage you to watch the above six videos. They are all quite short but they will all greatly encourage you, bless you, and perhaps stimulate you to become a bold defender of truth in whatever place God has put you in.

7 Replies to “Study To Show Yourself Approved”