If you have a lotta money, are good at film-making, can do spiffy special effects, have a half-way decent plot about the end of the world, and are able to garner a few big name actors, you have a recipe for a potential Hollywood blockbuster.

Filmmakers know full well that these sort of action thrillers, sci-fi and end of the world flics can be a really big money maker as they draw in large audiences. People seem to really go for such films, and they are being produced at regular intervals.

There are just so many of these films that have come out over the past few decades. Think of a few titles in this genre that have done quite well at the box office: After Earth, Pacific Rim, Armageddon, Battle: Los Angeles, War of the Worlds, End of Days, 2012, Independence Day, The Day After Tomorrow, Category 7, and Deep Impact. Such end-of-the-world apocalyptic films can be very successful indeed.

They often feature some E.L.E. (Extinction Level Event) in which life as we know it is likely to be wiped out. It could be due to some nasty alien invasion, or an asteroid bearing down on planet earth, or some deadly virus, etc. And all of human life is threatened, unless something is done to avert the crisis. 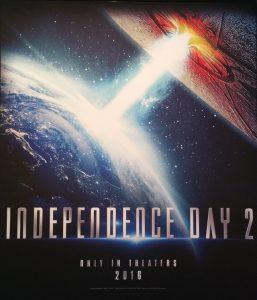 And sure enough, usually some hero or heroes come along to save the day, and everyone lives happily ever after. Sure, half of the planet might be under water, or obliterated, or up in flames, but a total wipe out is averted and life can go on – until the next E.L.E. pops up.

One of the most recent films in this category is Independence Day: Resurgence. It is a follow up to the hugely successful 1996 film. Some of the same actors have returned, along with some new ones, and once again planet earth is about to be gobbled up by some really nasty aliens.

For those of you who have not yet seen it I will not give away too many details here. But it is not a bad action film – one which I just came back from in fact. I don’t go to films that often, but when I do, I usually take my wife along and enjoy a few hours on mindless entertainment.

And when the film finishes my wife gives me that look – the look which warns me not to turn my viewing experience into an excuse for yet another new article! Oh well, sometimes I just can’t help myself. So here we go again. My intent is not to discuss the film very much, but to again look at some spiritual lessons or biblical parallels.

The film of course was not made by a believer, as far as I know. God and prayer get a few mentions – as might be the case when the world is about to come to a sudden end. And a person is even seen swearing in on a Bible. But that is about the extent of the religious stuff found in the movie.

But when you are dealing with the extinction of planet earth and all human life on it, one can’t help but think about spiritual matters a bit! And of course the Christian knows that yes, this world will come to an end one day, and yes, we will all die at some point.

But the cause of all this is not malevolent aliens and the like. The cause of human death and the eventual end of all things is our rebellion against God. Sin is the cause of all our problems. The Fall initiated the beginning of the end for planet earth and all who dwell on it.

When our first parents rebelled against God and decided they could live autonomously, in defiance against their Creator, they unleashed a series of events which we are still feeling the negative impact of. Because of human rebellion and sin, death entered into the world.

Now we all have the death sentence upon us, and now the earth as we know it cannot continue without end. It is a terminal condition, for mankind and for the planet. But the good news is, a hero has entered the picture and has done something about it.

Just like in the movies, when everything seemed to be bleak and everyone was in despair, a hero came forth to rectify the situation. God sent his son to take our place at Calvary 2000 years ago so that the death sentence we rightly deserved could be waived.

While we will all die physically, the resurrection of Jesus from the grave means we too will all one day be resurrected – those who have repented and put their faith in Christ will live with him forever. Those who refuse this incredible offer of grace and forgiveness will live forever apart from God – what we call hell.

So death no longer has the same hold over us that it once had. Because of what Jesus did for us, we now need not fear death and the grave. Jesus conquered both, and if we lay down our arms, say no to our rebellion, and agree to his terms, we can have everlasting life with him.

And this is not just about floating around on clouds somewhere, Scripture also speaks about a new heavens and a new earth. What exactly all that entails we cannot say with certainty: it may be a recreated earth, for example, or a brand new one.

But life on the earth will continue in one form or another. So it will go on, and so will we. That is the good news of the gospel. We all deserve to die for our sin. We all deserve the just justice of God. But God cared enough about our predicament to make a way out for us.

What we could not do for ourselves, he did for us. He made a way. The only question that remains is what will we do with his gracious offer of forgiveness, new life, and an eternity with him? It seems like a no-brainer to me.

So yes, the world is coming to an end and we are all gonna die. But that is not the end of the matter. There will be a new heaven and new earth, and we will all live somewhere for eternity. Where that will be is entirely up to us. Choose wisely my friends.

3 Replies to “It’s the End of the World and We’re All Gonna Die!”