God’s dealings with mankind in the OT are also what we find in the NT. He hates sin and commands repentance and holiness of his people in both Testaments. And let me at the outset deflect unnecessary criticisms here. God was a God of grace just as much in the OT and in the NT.

The people of Israel were first graciously saved and delivered by Yahweh without any merit of their own as they were freed from Egypt. It was only after that that the law was given: not as a means to save the people (they were already saved) but as a means of expressing gratitude and living a pleasing life to God based on that prior deliverance and salvation.

And law, properly understood, continues for Christians today as well. The fine details of this massive topic cannot here be broached, but suffice it to say that love does not abrogate the law but fulfils the law as Paul put it (Romans 13:10). The moral law of God continues, because God’s moral nature continues.

My intention here is not to get into another huge debate about such matters, but to simply say that what we find God doing in relation to his people in the OT is really no different from what we find in the NT. In both cases God loved his people into a saving relationship, and then expected them to keep that relationship intact by obedience and repentance.

When his people sinned and apostasised in the OT, he sent his servants the prophets to warn them and rebuke them. They were God’s covenant enforcers, who demanded that the people live up to their terms of the covenant. God hated their sin, but was always gracious and forgiving if his people would but turn and come back to God. 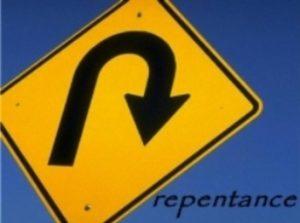 Thus we find time and time again in the prophets words of judgment as well as words of mercy. If the people repented, they would find forgiveness. If they persisted in their sin, then just judgment would be meted out. The warnings we find in the NT are little different.

As I am now reading in Jeremiah again, let me just highlight a few important truths as found in Jer. 2-3. These are amazing chapters, as is the entire book. Jeremiah the weeping prophet reflects the broken heart of God over a wayward people.

Because Israel had so determinedly and persistently forsaken God and broken his covenant, words of judgment, mingled with tears, are given here – and throughout the book. And the lessons for believers today should not be lost here.

Jeremiah reminds the people that as a youth, Israel was like a bride who loved God. But this did not last long. As a result the rebukes come in hard and heavy, as in 2:4-5:

Hear the word of the Lord, you descendants of Jacob,
all you clans of Israel.
This is what the Lord says:
“What fault did your ancestors find in me,
that they strayed so far from me?
They followed worthless idols
and became worthless themselves.

This is a damning word, but it is a common biblical theme: those who worship lousy idols soon become like what they worship. I have spoken to this elsewhere: billmuehlenberg.com/2013/10/19/becoming-what-we-worship/

The Hebrew is blunt and brutal: ‘They went after the worthless and they worthless-ized.’ The word translated worthless idols is the single word hebel, and it means a puff of wind, a triviality, something of no value, benefit or worth, something completely futile. It is the word regularly translated ‘vanity’ or ’emptiness’ in the book of Ecclesiastes.
But the sting in the tail is the final verb. They . . . became worthless themselves. They became like what they worshipped – which is a fact of life so much today as in ancient Israel. And here it is Jeremiah’s verdict on the worship of Ba’al and all the ritualized sexuality that went with it. The cult of fertility was a cult of futility, in which there was neither substance nor salvation. . . . And so the cult of worthless gods spawned a people characterized by delusion, vanity and emptiness.

As Wright states, are things any different today? We could conclude this piece by looking at how so much of contemporary Christianity is just like Israel of old. We have the same idolatry, immorality and disobedience. But Jeremiah says so much more. One of the key passages is 2:13:

My people have committed two sins:
They have forsaken me,
the spring of living water,
and have dug their own cisterns,
broken cisterns that cannot hold water.

The comments of J. A. Thompson about Israel can be fully applied to God’s people today: “Israel, who had available the full resources of their God, Yahweh, the spring of living water, turned aside to worthless substitutes, to trust themselves to powerless deities which, in the end, could not meet their deep spiritual needs.”

The candidates for such modern idolatry are easy to come by: money, power, success, illicit sexual pleasure, political power and human messiahs, etc. And the answer to all this is always the same. Jeremiah and all the prophets preached this, as did Jesus and the disciples: repentance.

F. B. Huey reminds us of what a vital theme this was for Jeremiah:

No other prophet made such frequent use of the word sûb (“return” or “turn”) as did Jeremiah. The root occurs 125 times in the book, twenty of them in chaps. 3-4. Jeremiah saw clearly that the only hope for Judah’s survival was to return to God. In these chapters he condemns Judah for forsaking God but makes a passionate appeal for them to repent.

Yes repentance is the recurring theme of Jeremiah and the prophets. But it is in order that God’s people might return to a right relationship with their Lord, and avert his just judgment. As we read in 3:11-15:

The Lord said to me, “Faithless Israel is more righteous than unfaithful Judah. Go, proclaim this message toward the north:
“‘Return, faithless Israel,’ declares the Lord,
‘I will frown on you no longer,
for I am faithful,’ declares the Lord,
‘I will not be angry forever.
Only acknowledge your guilt—
you have rebelled against the Lord your God,
you have scattered your favors to foreign gods
under every spreading tree,
and have not obeyed me,’”
declares the Lord.
“Return, faithless people,” declares the Lord, “for I am your husband. I will choose you—one from a town and two from a clan—and bring you to Zion. Then I will give you shepherds after my own heart, who will lead you with knowledge and understanding.”

Repentance means a turning back, a return. It is always the means by which God deals with a rebellious people. Indeed, contrary to the claims of the hyper grace teachers, confession of sin is always paramount for the believer, as is repentance. All the great saints have known this. Let me close with the words of just a few of them:

“Our Lord and Master Jesus Christ … willed that the whole life of believers should be repentance.” Martin Luther

“Evangelical repentance is that which carries the believing soul through all his failures, infirmities, and sins. He is not able to live one day without the constant exercise of it. It is as necessary unto the continuance of spiritual life as faith is. It is that continual, habitual, self-abasement which arises from a sense of the majesty and holiness of God, and the consciousness of our miserable failures.” John Owen

“A Christian must never leave off repenting, for I fear he never leaves off sinning.” C.H. Spurgeon

6 Replies to “The Enduring Message of Repentance”