Taking offense has become a national pastime in much of the West. Everyone seems to be getting offended about something. We have not only become an easily offended people, but we are even now making laws about all this. Vilification laws, hate speech laws, and the like are all about not offending anyone – or at least certain groups, such as Muslims, homosexuals, etc.

An entire industry has sprung up around the taking of offence. This has led to the death of public discussion and debate, since to simply disagree with someone today will mean they will run away crying about how they have been offended. It is leading, therefore, to the death of free speech. 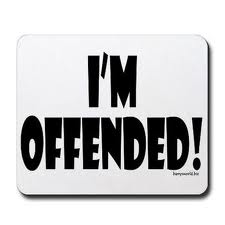 It is typical of the secular left to easily take offence and thus short circuit free speech, but believers can do this as well. Increasingly we find Christians taking offence, for example, if you share any hard biblical truths. If you speak about sin, repentance, eternal judgment and such basic biblical doctrines, you will find plenty of nominal Christians taking offence.

I have even had Christians taking offence when I simply quoted Scripture. But this is not a completely recent phenomenon. The Bible actually speaks to this same matter. As I just read in my daily reading, Jeremiah had to chew out God’s people for doing this very thing. As we find Yahweh saying in Jer. 6:10:

“To whom can I speak and give warning?
Who will listen to me?
Their ears are closed
so they cannot hear.
The word of the LORD is offensive to them;
they find no pleasure in it.”

Imagine that: the people of God taking offence at God’s word! Yet, as mentioned, we find this happening today as well with Christians telling God which bits of the Bible they like and which they don’t like. All this is bad enough, but there is something even worse taking place.

I refer to the only figure we should be seeking not to offend – God. What, God can be offended? Yes, God takes offence at our sin and rebellion, and he has every right to be offended. His is not an arbitrary or petty taking of offence, but a legitimate offence at evil.

If we simply take some standard definitions, we can see how this is fitting for God. To feel offended is ‘to feel angry and upset because of something that someone has said or done’ and to offend is ‘to cause displeasure, wounded feelings, or repugnance in another’.

God is grieved, displeased, angered and repulsed by sin, and when his creatures persist in sin he rightly takes offence. Plenty of passages can be appealed to here. How sin grieves God is found in both Testaments. For example:

-Genesis 6:5-6 The LORD saw how great the wickedness of the human race had become on the earth, and that every inclination of the thoughts of the human heart was only evil all the time. The LORD regretted that he had made human beings on the earth, and his heart was deeply troubled.
-Ephesians 4:30 Do not grieve the Holy Spirit of God, by whom you were sealed for the day of redemption.

God’s total revulsion and hatred of evil is stated throughout Scripture. A few such texts include:

-Deuteronomy 12:31 You must not worship the LORD your God in their way, because in worshiping their gods, they do all kinds of detestable things the LORD hates.
-Deuteronomy 23:18 You must not bring the earnings of a female prostitute or of a male prostitute into the house of the Lord your God to pay any vow, because the Lord your God detests them both.
-Psalm 7:11 God is a righteous judge, a God who expresses his wrath every day.
-Psalm 45:7 You love righteousness and hate wickedness;
-Proverbs 6:16-19 There are six things the LORD hates, seven that are detestable to him: haughty eyes, a lying tongue, hands that shed innocent blood, a heart that devises wicked schemes, feet that are quick to rush into evil, a false witness who pours out lies and a man who stirs up dissension among brothers.
-Proverbs 15:8-9 The Lord detests the sacrifice of the wicked, but the prayer of the upright pleases him. The Lord detests the way of the wicked, but he loves those who pursue righteousness.
-Proverbs 15:26 The Lord detests the thoughts of the wicked, but gracious words are pure in his sight.
-Isaiah 1:13-14 Stop bringing meaningless offerings! Your incense is detestable to me. New Moons, Sabbaths and convocations – I cannot bear your worthless assemblies. Your New Moon festivals and your appointed feasts my soul hates. They have become a burden to me; I am weary of bearing them.
-Isaiah 61:8 For I the LORD love judgment, I hate robbery for burnt offering; and I will direct their work in truth, and I will make an everlasting covenant with them
-Amos 5:21 I hate, I despise your religious feasts; I cannot stand your assemblies.
-Malachi 2:16 “I hate divorce,” says the LORD God of Israel, “and I hate a man’s covering himself with violence as well as with his garment,” says the LORD Almighty. So guard yourself in your spirit, and do not break faith.
-Hebrews 1:9 You [Jesus] have loved righteousness and hated wickedness.
-Revelation 2:6, 15-16 But you have this in your favor: You hate the practices of the Nicolaitans, which I also hate… Likewise you also have those who hold to the teaching of the Nicolaitans. Repent therefore! Otherwise, I will soon come to you and will fight against them with the sword of my mouth.

Given God’s holy hatred of evil, how greatly must we fear offending him? The fear of the Lord is indeed the beginning of wisdom. No wonder we read so much about fearing God in the Bible. Offending a holy God is the last thing any of us should want to do.

Thankfully the fully justified wrath of God which rests upon sinners was taken up by his son so that those who come to him in faith and repentance are spared that. But his wrath remains on those who still shake their fists at him. That is a very bad place to be in.

While the believer is spared the wrath of God because of Christ’s finished work at Calvary, we can still grieve God, as the Ephesians 4 passage quoted above makes clear. So the believer also needs to have a healthy fear of God. He is the one all of us should seek never to offend.

Or as Dorothy L. Sayers more recently wrote: “If all men are offended because of Christ, let them be offended; but where is the sense of their being offended at something that is not Christ and is nothing like him? We do him singularly little honor by watering down his personality till it could not offend a fly. Surely it is not the business of the Church to adapt Christ to men, but to adapt men to Christ.”

5 Replies to “There Is Only One We Dare Not Offend”