The Rio summer Olympics are not even halfway over yet, but already some major records have been broken. One that stands shoulders above all the rest is the ongoing performance of swimmer Michael Phelps. The American athlete had already taken the lead in most gold medals ever won prior to these games, but now he is adding even more to his tally. 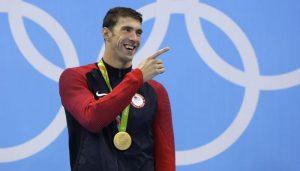 And bear in mind that the 31 year old still has more events to compete in at Rio. At the moment if Phelps were a nation, he would rank 39th in the world, equal with Ethiopia on the all-time Olympic gold medal table. Not a bad feat by any means. It may be quite some time to come before anyone else ever breaks this amazing record.

All that gold is certainly a spectacular achievement, but one can speak of a higher gold standard which we can discuss when thinking about Phelps. And that is an encounter with Christianity which he has recently spoken about. That has helped him to turn his life around.

Prior to this he has had his troubles, including missing out on some competitions because of several drink driving convictions. He retired after the 2012 London Olympics, and experienced depression and suicidal thoughts, only to announce his re-entry to competition two years later.

A report says that a best-selling Christian book helped him to turn things around. Let me quote from it here:

American swimmer Michael Phelps, the most decorated Olympian of all time, revealed that he suffered a crisis of identity two years ago, which led him to consider ending his life, but it was Saddleback Church Pastor Rick Warren’s book The Purpose Driven Life that gave him hope.
ESPN reported that Phelps was “struggling to figure out who he was outside the pool” in 2014, which led him to heavy drinking and wondering whether his life was worth living. “I thought the world would just be better off without me,” Phelps admitted. “I figured that was the best thing to do — just end my life.”
The 22-time medal winner, who is also set to compete at the Summer games in Rio, said in a separate interview with NBC’s “Today” that his DUI arrest in 2014 led to a “downward spiral” that left him feeling the lowest he had ever been. It was the Olympic swimmer’s second DUI arrest in 10 years, which along with his numerous splintered relationships, prompted him to seek outside help.
Phelps found hope in October 2015 when he entered The Meadows, a psychological trauma and addiction treatment center in Arizona. There, Phelps turned to Warren’s bestseller The Purpose Driven Life, which uplifted him so much so that he was nicknamed “Preacher Mike” by fellow patients, since he would often read to them from the book.

This report of course does not give us all that much detail. Was he simply inspired by this uplifting book, or did he actually give his life over to Jesus Christ? Another article on him gives us a bit more detail which I quote in part:

“I was like a time bomb, waiting to go off. I had no self-esteem, no self-worth. There were times where I didn’t want to be here. It was not good. I felt lost.”
Photos began to emerge of him smoking drugs, and he was arrested twice for drunk driving. Following the most recent encounter with the cops, he spent days wallowing in his bedroom, contemplating committing suicide. But then God intervened, via his Christian friend, NFL star Ray Lewis. Lewis called up his buddy and told him, “This is when we fight. This is when real character shows up. Don’t shut down. If you shut down we all lose.”
Lewis convinced Phelps to seek help at the Meadows, a behavioural rehab facility outside Phoenix, and handed him a book, The Purpose Driven Life, by Pastor Rick Warren. Phelps checked into rehab, started to flick through the pages, and called Lewis immediately. “Man this book is crazy!” he exclaimed. “The thing that’s going on…oh my gosh…my brain, I can’t thank you freaking enough, man. You saved my life.” Phelps said the book “turned me into believing there is a power greater than myself and there is a purpose for me on this planet.”

Again, this does not give us all the detail we might like to learn if he indeed now has a living relationship with Jesus Christ. Hopefully we will learn more in days to come, especially after the Rio games finish. But it is certainly hoped that he has indeed had a life-changing encounter with the risen Christ.

If he has, then that is the ultimate gold standard to strive for. Sure, 21 gold medals and counting are the stuff of dreams, but all this will soon enough amount to nothing. The only thing that really matters is if we are right with God through Christ.

As the Apostle Paul said about the major sporting games of his day in relation to the Christian life in 1 Corinthians 9:24-27:

Do you not know that in a race all the runners run, but only one gets the prize? Run in such a way as to get the prize. Everyone who competes in the games goes into strict training. They do it to get a crown that will not last, but we do it to get a crown that will last forever. Therefore I do not run like someone running aimlessly; I do not fight like a boxer beating the air. No, I strike a blow to my body and make it my slave so that after I have preached to others, I myself will not be disqualified for the prize.

The eternal prize of right relationship with God far outweighs any earthly awards and prizes we might get. If Phelps has indeed become a new creation in Christ, he would know this as well. Sure, he can be very proud of his achievements in the pool, but at the end of the day, his spiritual achievements will take precedence over all earthly fame and glory.

7 Replies to “Phelps and the Gold Standard”