It is getting to the place where I almost need to do regular columns on the Australian Football League. It seems that on a weekly basis it is becoming more and more of a political activist body, pushing every lousy PC agenda item out there.

Instead of just offering the Australian public some relaxing entertainment on the weekends, it has now decided it must stick its nose in every contentious social and political cause going. Who authorised the AFL to become a political advocacy group?

When did their aim of providing football games change to one of radical activism and the promotion of all things politically correct? Did the AFL change its mission statement some time ago and not bother telling any of us about it? Just what is wrong with the head honchos at the AFL anyway? 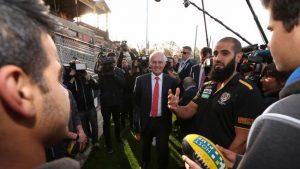 Consider the latest outrage perpetrated by these guys. As one news report puts it:

The AFL is offering 10 “diversity trainee” positions worth $34,000 a year exclusively to Muslim youth as part of a Federal Government-funded program. To be eligible for the positions, which span a range of areas including social media, administration, finance and marketing, applicants must “be from Muslim background”, and “have recently completed secondary school”.
“Workforce participation is a pivotal issue impacting the Australian Muslim community, especially Muslim young people,” the job listings read. “To help assist Muslim young people make that step into employment, the Federal Government has provided funding support for 10 traineeships for Muslim young people to work across the AFL industry over a 12 month period to gain critical work experience and job skills.
“The AFL in turn has partnered with AFL SportsReady to offer a unique traineeship opportunity as part of the Bachar Houli Employment Program.” The Turnbull government earlier this year announced the traineeships as part of an additional $625,000 in funding for the AFL’s long-running Bachar Houli Cup and Leadership Program.
Bachar Houli, the AFL’s Multicultural Ambassador, is Richmond’s star player and considered a mentor and role model for young people in the community. Houli was a guest at Malcolm Turnbull’s pre-election Iftar dinner celebrating the end of Ramadan.
The “selection criteria” for the AFL positions advertised in Victoria and Queensland specify that applicants “must be from a Muslim background”, with a disclaimer noting that the action constitutes a “special measure” or “equal opportunity measure” under the respective state anti-discrimination laws.
In NSW, which is the only jurisdiction without a clear “special measures” provision in its anti-discrimination legislation, the listing reads: “Applicants from a Muslim background are strongly encouraged to apply for this position”.
NSW applicants must instead have “a demonstrated knowledge and understanding of the Muslim faith”, “a demonstrated knowledge and understanding of multicultural communities”, and “a demonstrated ability to communicate sensitively and effectively with diverse communities”.
The fulltime positions receive the National Training Wage Award plus superannuation, which comes to slightly over $34,000 for the 12 months. The AFL offers a number of similar positions for Aboriginal and Torres Strait Islander school leavers as part of its diversity traineeship program, which provides “employment path ways and skill development in young multicultural and indigenous people aged 15-19”.

Mind-boggling! There is just so much that is wrong with this insanity. What in the world is wrong with these bigshots at the AFL? What do they put in the drinking water there? In the name of diversity they in fact are shutting down real diversity. By singling out one group over and against all other groups, this is not about inclusion but exclusion.

It is preferential treatment for a tiny segment of society, while all the rest of society is overlooked and marginalised. Not only do Muslims make up just over two per cent of the entire Australian population, but there would be only the smallest handful of Muslim AFL players anyway.

Why the special treatment? And why preferential treatment for a religious group for heaven’s sake? Since when is the AFL in the business of favouring one religion above all others? When will Jews get similar treatment? When will we have Christian youth getting $34,000? When will Buddhists get their own scholarships?

And if none of these other groups will be getting such special privileges, why not? Why have we decided to elevate Islam above all other religions and make it the focus of special rights? Who decided this? What rationale can they offer for this moonbattery?

They are treating Islam as if it were a race, which it clearly is not. It is a religion, and more specifically, a political ideology, one that is bent on seeing the whole world submit to Allah and sharia law. Why does the AFL insist on preferencing this political ideology?

That Islam is not a race is perfectly clear – Muslims come from all racial backgrounds, and can be white, black, brown, and so on. So why treat Islam as if it is some deserving race in need of special protection? If anything, as we now see on a daily basis, Westerners are the ones who need protection from devout Muslims who are waging jihadist terror on the infidels.

And even more bizarre is the fact that this announcement comes on the very weekend in which the AFL is pushing yet another radical PC agenda: the homosexual pride round. Throughout this weekend the rainbow agenda will be crammed down our throats by the AFL. I discuss this here: billmuehlenberg.com/2016/08/01/radical-gayfl-strikes/

Um, earth calling the AFL: do you know the slightest bit about what Islam teaches when it comes to homosexuality? Do you? This is a grievous sin in Islam, one that warrants the death penalty. How many blindfolded homosexuals must be tossed off high buildings in Muslim majority countries before you get the message?

If Christians were hurling homosexuals from church steeples, do you think the AFL would single them out for favour, honour, prestige and special rights, and offer Christian young people scholarships? Just how brainless are these big cheeses at the AFL?

The real howler however comes from Justice Minister Michael Keenan who said the program “contributes to a resilient and harmonious society united around shared values of mutual respect, freedom of speech and freedom of belief”.

Are you for real Keenan? Are you for real AFL? Millions of Australians just want to have a few hours of fun and forget about politics and contentious social issues. So what do the dhimmis and activists at the AFL do? Force feed us weekly doses of political and hot potato issues.

Thanks a lot AFL. You guys are pathetic.