If a race of hostile aliens from another planet wanted to know how to destroy the West from within, they could scarcely improve upon what we are already doing to ourselves. By dumbing down an entire generation, teaching them to emote and feel their way through life, instead of thinking and critically reflecting, you create the perfect storm for national suicide.

And that is just what we have been busily doing. Now most people are unable to assess and reflect on the issues of the day. They instead simply run on feelings. And of course emotions are so very easily manipulated. You can get away with just about anything if you feed the feelings while starving the intellect.

I was reminded of this yesterday as I was on another airplane flight. I looked up to see the propaganda piece, Modern Family being aired for all to see, whether they liked to or not. It is far more than a mere American television comedy of course: it is an exercise in social engineering – one of hundreds found throughout popular culture. 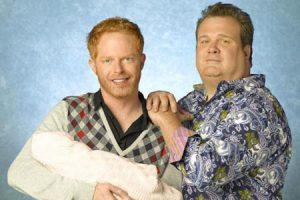 The show features a homosexual couple and “their” young child. Of course it is not their child: children cannot come into the world through two men. But the thrust of the show – like so many others – is to convince the gullible masses that family can mean whatever we want it to, and no family structure is any better than any other.

This in spite of a half century of social science research to the contrary. The data on all this is voluminous, yet in a culture dominated by feelings, things like facts and evidence mean very little. Thus the mountain of research is ignored as we prefer to emote about this issue.

We have hoodwinked a whole generation to have warm mushy feelings whenever the words “love” and “equality” and “acceptance” are bandied about (without any definitional content) while they will seethe with rage when they hear words like “discrimination” and the like.

So the enormous amount of social science data out there telling us children do best when raised by their own mother and father, preferably sealed by marriage, means nothing to so many folks today. Instead a TV comedy of two seemingly happy homosexuals cuddling a toddler is all we need.

But political advocacy sitcoms and vacuous emotions do not determine the truth of the matter – facts and figures do. In my various books on this topic I have offered plenty of material on the need for a mum and a dad, and how children really do suffer without them.

In my book Dangerous Relations for example I offer several well-documented chapters on this. Let me just partially quote from one of the chapters, “The Importance of Both Fathers and Mothers”. It begins this way:

As the push for homosexual marriage continues apace, with various countries succumbing to the pressure of the homosexual activists, the issue of homosexual parenting is also gaining prominence and importance. In my book Strained Relations I had several chapters documenting this issue, showing how children do best when raised in a two-parent married household, and do less well when raised in any other household.
I examined some of the studies purporting to show that children do fine when raised in homosexual households, offering plenty of data as to the flawed nature of such studies, and demonstrating that the traditional heterosexual family is always in the best interests of the child.
The simple truth is, men and women are different, and both a father and a mother are necessary to ensure the best environment for raising children. One helpful recent booklet on this is well worth consulting here. The 2007 publication 21 Reasons Why Gender Matters is a fact-filled document put together by a team of family experts, medical practitioners, and social science researchers. In just 24 pages it presents a tremendous amount of information and statistics as to why gender matters. Buttressed with 178 endnotes, the document makes it very clear that attempts at same-sex parenting are fundamentally unhelpful to children.
As it says in its introduction: “This document lays out the case for the importance of male and female genders, and argues against the new androgyny and the social engineering taking place in the arena of gender. It examines some of the evidence that shows men and women are different, including the fact that our brains are different, our biochemistry is different, our hormones are different, our strength levels are different, our physical designs and sizes are different, and therefore our needs for protection and security are different. Such hardwired differences explain why men and women are so different in areas of behaviour, perceptions, the way they process information, and so on.”
Given these fundamental differences between men and women, the case against homosexual parenting becomes that much stronger. Two men cannot take the place of a mother and a father, and neither can two women. Children deserve both, and they have a basic right to be raised, whenever possible, by their won two biological parents – a mother and a father.
This chapter will look at some of this evidence. It will first look at how father-absence harms children. Next it will discuss the importance of mothers. Finally, it will briefly examine in a bit more detail why mothers and father are different, and why children need both.

Since the poor child in the sitcom has no mother, let me cite just a small bit of what I said about this issue in that chapter:

Not only is the important role of instilling values, purpose and responsibility best met by a child’s biological parents at an early age, but so too is the cultivation of a sense of security and well-being. Indeed, as one expert put it, the attachment relationship that a young child forges with his mother “forms the foundation stone of personality.” Regular and prolonged detachment from the mother can demonstrably impair a child’s intellectual and emotional development, and affect a child throughout his or her life.
Studies in bonding and attachment theory have shown that a child’s emotional and mental well-being are inexorably tied up with continuous, sustained, stable physical and emotional contact between mother and child. Taking the child away from its mother during this critical period can result in a number of harmful results: “Children deprived of parental care in early childhood are likely to be withdrawn, disruptive, insecure, or even intellectually stunted. New research [even suggests] that the depression resulting from separation anxiety in early childhood can cause a permanent impairment of the immune system making these children prone to physical illness through their lives.”
Or as family expert Steve Biddulph writes, “It now appears that mother-baby interaction, in the first year especially, is the very foundation of human emotions and intelligence. In the most essential terms, love grows the brain. The capacities for what make us most human – empathy, co-operation, intimacy, the fine timing and sensitivity that makes a human being charismatic, loving, and self-assured – are passed from mother to baby, especially if that mother is herself possessed of these qualities, and supported and cared for, so that she can bring herself to enjoy and focus on the task.”

I concluded the chapter as follows:

When we disregard the gender distinctions of parental influence as unimportant or unnecessary, we seriously diminish the proper development of children. Kids need the active participation of a mother and a father, and both parents need to be true to their gender designs. Both bring different and equally important things to the parenting project. We impoverish children and society when we deny our kids the influence of a mother and father, because we limit their development into full, healthy adults.
As Barbara Dafoe Whitehead put it: “All this evidence gives rise to an obvious conclusion: growing up in an intact two-parent family is an important source of advantage for American children. Though far from perfect as a social institution, the intact family offers children greater security and better outcomes than its fastest growing alternatives: single-parent families and stepparent families.”

To that can be added homosexual households. But of course the radical social activists and the gender benders want us to ignore the tremendous amount of research done on this, and just emote about it all as they throw around some emotionally charged buzzwords.

8 Replies to “How To Destroy a Culture and Our Children”