Socrates was said to have been sentenced to death by the state because he was accused of atheism (impiety) and corrupting youth because he did not acknowledge the gods of Athens. His life was ended by drinking hemlock, but accusations of atheism did not stop there.

The early Christians were accused of similar things. Because they refused to worship the emperor and the gods of the day, they were accused of atheism and persecuted by the state. Back then things were much more black and white: there was no interfaith dialogue; there was no compromise in order to just get along and be accepted; and there was no idea that Christianity could peacefully coexist with pagan religions.

It was Christ or nothing. There could be no syncretism between the state and the new found faith. As Jesus put it, “Render to Caesar the things that are Caesar’s, and to God the things that are God’s” (Mark 12:17). By refusing to worship the state, but only Christ, the early Christians were clearly seen as rebellious and revolutionary. 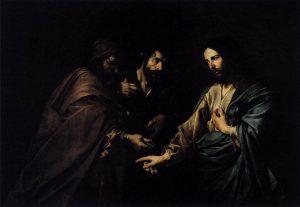 Indeed, to proclaim Jesus as Lord was seen as an act of treason since only the Roman emperor was to be viewed as Lord. So this new faith was seen not just as some upstart religious movement, but as a serious political threat to the state and the status quo.

Social order was maintained by allowing the people to have their various gods, as long as none was seen as supreme and none rivalled allegiance to the state. Thus when the Romans conquered a foreign people, they were quite happy to add their god to all the others in the Pantheon in Rome.

That was radical stuff, and that could get you killed back then. And it did, with countless early believers tortured and killed for their allegiance to Christ alone. That in part is why the early believers endured a similar fate to the one reported to have happened to Socrates.

They too were labelled atheists. Let me briefly mention one noted account of all this. There is an early Christian document entitled The Octavius by Minucius Felix. One site says this about the document: “The Octavius by Minucius Felix is an apology for the Christian religion. Either Tertullian depended on this apology, making it perhaps the earliest piece of extant Christian Latin literature, or the author of this apology depended on Tertullian.”

The late 2nd century A.D. document is penned in the form of a dialogue between a pagan Caecilius and a Christian Octavius. In it are 41 brief chapters which includes various charges levelled against Christians by the pagan. In Ch. 8 the charge of atheism is raised. A much more popularised and abbreviated version of this chapter runs as follows:

CAECILIUS: What concerns me is what you really are. This is the reason that you are hated across all the lands of this vast empire. Let’s get to the real problem. You are atheists.
OCTAVIUS: Yes, we are atheists – if you mean that we do not pray to or believe in all of the gods that we are expected to worship. But these are not gods. We worship the one true God, the Lord over all.

I raise all this because of two reasons. One I have already hinted at: the whole interfaith dialogue thing which is all the rage in so many Christian circles today is something that would have been unheard of back then. It was politically expedient then for the rulers to have such interfaith harmony, but for Christians this was the height of spiritual adultery and idolatry which could not be countenanced.

As historian Edward Gibbon put it about the last days of Rome in his The Decline and Fall of the Roman Empire, “the various modes of worship, which prevailed in the Roman world, were all considered by the people, as equally true; by the philosopher, as equally false; by the magistrate, as equally useful.”

Today our political leaders are also pushing the same foolishness in the interests of keeping the masses docile and their rule in check. Thus they compete with one another to be the most naïve and blind about the political ideology of Islam for example.

In the vain attempt to keep the peace, they think they can just appease Muslims and hope that everything will end up just rosy. But we are seeing the bitter fruit of that failed policy all over the West today. As Churchill once put it, “An appeaser is one who feeds a crocodile, hoping it will eat him last.” All this is a recipe for disaster, and each new day finds another case of blood on the streets in the West.

But there is a second reason I raise all this. Back then being faithful to Christ while resisting the siren calls of compromise and appeasement was a matter of life and death. While we can play our little ecumenical games today with no fear of reprisal, back then this was serious business.

There was no real middle ground there. You either proclaimed Christ as Lord and faced severe consequences, or you did not. There were very few half-hearted and nominal Christians back then. Such creatures would have been an oxymoron.

To follow Christ meant following him 100 per cent. To be his disciple meant being willing to risk everything and to lose everything. Carnal Christianity did not cut it back then. If you made a public declaration of following Christ, you put your life at jeopardy.

And so many believers back then paid the ultimate price for making Jesus Lord, and doing so publicly. But in marked contrast, today our churches are full of compromised and carnal believers. They will never open their mouths in public to defend Christ and biblical truths and values.

Because of their compromise and cowardice, they are effectively siding with just one of the original twelve disciples: Judas. They are denying their Lord by not actively promoting and defending him publicly. And Jesus himself made this perfectly clear.

As we read in Mark 8:3, “If anyone is ashamed of me and my words in this adulterous and sinful generation, the Son of Man will be ashamed of them when he comes in his Father’s glory with the holy angels.” If we are too craven and carnal to speak out about Christ as Lord, we have effectively denied him.

This is serious business folks. Maybe in ‘normal’ times this might suffice, but we are no longer living in normal times. Today the dividing line between light and darkness, truth and falsehood, God and Satan, is becoming crystal clear. So too is the increase in anti-Christian bigotry and persecution.

We no longer have the luxury of just sitting on the fence. Such ‘neutrality’ is impossible for the true Christian. “Whoever is not with me is against me” said Jesus. It is time in these dark days to take a stand and make a choice. Who will it be: the Lord Jesus, or the lord self? It cannot be both. It is one or the other. We either make him Lord of all, or he is not Lord at all.

Your call. Choose wisely. Time is running out.

2 Replies to “Atheism, the State, and the Early Christians: Lessons for Today”