And there have been plenty of studies done over the years to prove this very point. Let me mention just three books dealing with the Protestant scene, which clearly document what I have just said. The first volume is Why Conservative Churches are Growing, written back in 1972 by Dean Kelley. 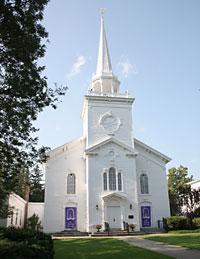 Another volume came out in 1996: The Empty Church: The Suicide of Liberal Christianity by Thomas Reeves. And in 2006 Exodus: Why Americans Are Fleeing Liberal Churches for Conservative Christianity appeared, written by Dave Shiflett.

All three of these book-length studies made it plain that liberal theology and a rejection of the Bible and biblical values are a recipe for disaster, and not many people are all that thrilled with staying at such churches. Of course satanic deception does mean that many folks get sucked into cults and liberal churches – they have their ears easily tickled.

But those looking for the real deal will give these liberal churches short shrift. If people are seeking after truth, the pale imitations hold little or no attraction. As C. S. Lewis wrote long ago, “By the way, did you ever meet, or hear of, anyone who was converted from skepticism to a ‘liberal’ or ‘demythologized’ Christianity?”

And the research continues to affirm this. Biblical Christianity which remains faithful to God and His Word continues to attract and keep people, while liberal churches and those commandeered by SJWs do not. A new study, from the Canadian province of Ontario, makes all this pretty clear.

Here is how it has been described:

The long disputed question of just what role adherence to core Christian orthodoxy plays in a church’s numerical success—that is, whether it is growing or declining—has received a compelling and convincing answer in a major new peer-reviewed study by two Canadian academics.
In “Theology Matters”—its title a succinct summation of its conclusion—to be published in the December issue of the Review of Religious Research, Wilfrid Laurier University sociologist David Haskell and Kevin Flatt, professor of church history at Hamilton’s Redeemer University College, reveal the statistical commonalities among nine growing and 13 declining congregations in southern Ontario. The churches—located in the most church-rich part of English Canada—come from four mainline Protestant denominations: Anglican, United Church, Presbyterian, and Evangelical Lutheran. Decline was defined as an average annual loss of two per cent of attendees between 2003-13; growth by the opposite—although the truly expanding left that rate in the dust.
Parker, whose St. Paul’s is a “destination” church, drawing attendees from as far afield as Barrie, 100 km north, thinks five per cent “is about normal” for a year’s growth. Sherbina’s flock has increased almost 80 per cent in nine years, while Allison has seen his St. Paul’s go from 35 Sunday attendees when he arrived 21 years ago to 400 now. Those numbers are far from usual. Scholars have tracked shrinking mainline membership for decades, and declining churches are easy to find. Identifying the growing ones, though, was a “challenge,” Haskell says.
Eventually, through word-of-mouth—which often turned out to be more hopeful than accurate, adds co-author Flatt—the researchers found their examples. They surveyed clergy and—a step ignored by earlier studies—2,255 lay attendees.
Answers in accord with traditional Christian orthodoxy—basic articles of faith (the ancient Creeds), the authority of Scripture, God’s visible working in the world today, the exclusivity of Christianity (Jesus as the door to eternal life), the importance of daily prayer—were tightly bound to growing life in individual churches. As well, conservative churches had a lower mean age among attendees (53 to 63), emphasis on youth groups, the presence of young families, wide participation by congregants (not only on Sunday mornings) and a commitment to evangelism.

Nowhere do clergy matter more than in their most deeply held attitudes. Sociologists who study religion debate whether the decline in church attendance is a matter of demand—fewer moderns want it—or a matter of supply, with would-be Christians not finding the faith they want. “When we asked clergy why they thought churches grew or declined, those in the shrinking churches replied decline was because of socio-economic factors, the influence of secular society. Clergy in expanding churches said growth was because of what they and their members did.” And what they preached, adds Haskell: “Ideas have consequences.”

Here are just two specific indications of this, based on the data:

Other questions deal with doctrinal beliefs, such as ‘‘Through the life, death and resurrection of Jesus, God provided a way for the forgiveness of my sin” and “The Bible is the word of God and is reliable and trustworthy.” Those particular results can be viewed here: www.macleans.ca/society/nine-interesting-data-points-on-the-state-of-todays-protestant-churches/

All up, the research again confirms what we have long known: growing churches take seriously the Bible and core theological truths, and they are filled with people who take their faith seriously and have a close walk with the living God.

Notice that the growing churches described here are not bringing in the crowds because of entertainment, seeker-sensitive services, or mimicking the world in worship and teaching. It is because they were clearly different from the surrounding culture that these churches are growing and thriving.

Faithfulness to Christ and to Scripture and to basic biblical doctrine is always the tried and tested way of growing churches. Trying to be like the world is not. It is time many of our churches today started to re-examine what foundation they are built on: sinking sands or solid rock.

7 Replies to “Why Churches Are Growing – And Declining”