Law without consequence is mere advice. And throughout much of the West we see this being played out: law and order is on the decline while crime is on the increase. Also on the decline is punishment. Instead of dealing with criminals effectively, we are coddling them while penalising their victims.

All this has not happened by accident. It is the deliberate outcome of leftist thinking in general and liberalised law schools in particular. Because we no longer believe in moral absolutes, we no longer believe there is any such thing as sin. Thus we do not think real evil exists, or evil persons.

And justice has always been about just deserts – giving to people what is rightly due them. But if we no longer think in terms of crime and criminals, but merely illness and sick people, then the offender of today does not get punished, but gets therapy and “understanding” and coddling.

People have long warned us about this dangerous trend in law enforcement. C. S. Lewis for example wrote an important article about the “The Humanitarian Theory of Punishment” back in 1949. Since I have previously spoken about this piece of his, let me repeat some of what I wrote here: 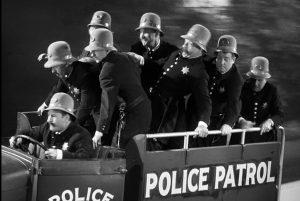 anitarian about what he calls the “Humanitarian theory”. The theory goes like this: all crime is really pathological, and treatment, not punishment, is what is required. Punishment is seen as barbaric and vindictive. After all, if someone is sick, we don’t punish them, we seek to treat them. The Humanitarian view rejects the notion of sin, of right and wrong, and instead sees crime in terms of maladaptive behaviour. Those holding to this view believe that this is the only humane and just way to approach criminal activity.
But Lewis reminds us that traditionally justice has always been about giving to each person his or her due. Justice is in large part about retribution. It is the old concept of reaping what you sow, in other words. But by separating consequences from actions, and punishments from crimes, we are actually doing the criminal greater harm.
Says Lewis, “when we cease to consider what the criminal deserves and consider only what will cure him . . . , we have tacitly removed him from the sphere of justice altogether; instead of a person, a subject of rights, we now have a mere object, a patient, a ‘case’.”
He continues, “The Humanitarian theory removes from Punishment the concept of Desert. But the concept of Desert is the only connecting link between punishment and justice. . . . The Humanitarian theory, then, removes sentences from the hands of jurists whom the public conscience is entitled to criticize and places them in the hands of technical experts whose special sciences do not even employ such categories as rights or justice.”

And we see on a daily basis the outcome of these perverted views of justice. Crime is rising, lenient sentencing seems to be getting worse, and people are increasingly afraid of living in a society where the criminals seem to always have the upper hand.

Consider some brand new polling from here in Victoria where crime in general and the Apex gang in particular are becoming real concerns. As a report in today’s press opens:

Premier Daniel Andrews has lost control of the Apex gang crisis and is not doing enough to tackle Victoria’s youth crime wave, according to a new poll. After a series of terrifying home invasions and youth justice riots, Galaxy research conducted exclusively for the Herald Sun shows 68 per cent of voters polled believe authorities are losing the battle against Apex. And in a direct warning to the Andrews Government, 64 per cent believe it is not doing enough to tackle youth crime and 44 per cent think the state is less safe today than at the 2014 state election.

When you are afraid to leave your own home, and are even afraid that your own home may not be safe, then you know we have a real law and order problem on our hands. Yet we seem to have far more leaders and judges who would rather side with the criminals than with the ordinary citizenry.

Australia is not alone in such problems and such fears. The UK is in the same place, and Peter Hitchens has just written about this situation there. His headline sets the stage: “Fifty years of ‘enlightened’ jails gave us one thing – more crime”. His entire piece is well worth running with here:

Modern politicians don’t like taking responsibility for anything difficult. They hate the idea that you sometimes have to punish people. That’s understandable. Locking people up and making them work hard and do as they’re told isn’t very nice.
But if you can’t bear the burden, then don’t seek paid public office. These nasty tasks are the most basic duty of the State. If it won’t protect us from the wicked, then we might as well wind it up. We have disarmed in the face of danger. Until about 50 years ago, the stated aim of prisons was ‘the due punishment of responsible persons’. Under a clear criminal code, most crooks and most louts were scared of prison and tried not to go there. It wasn’t some savage place of torture and beatings.
By world standards our prisons were very civilised. But they were austere, disciplined and under the control of the authorities. Then along came the liberal modernisers. Police were turned into paramilitary social workers, soft on crime, tough on professors’ wives trying to stop trees being cut down.
Judges were no longer allowed to punish anyone without checking first to see if they’d had a horrid childhood. Voluntary drug abuse was treated as an unavoidable disease, rather than as the crime it is. How the criminals laughed. Prisons were transformed into apologetic, weakly run places where something called ‘rehabilitation’ would supposedly happen. It never has.
The point of prison was to scare people away from doing things they knew would put them there. Nobody had any fancy ideas about changing the hearts and minds of those who were actually locked up. With a bit of luck they wouldn’t want to go back, but if they did, there was room.
It worked. In 1950-51, the prison population of England and Wales was 20,474. Even ten years later it was a manageable 27,099. Then along came the enlightened ones. By 1980, the total was almost 40,000. By 1999, the same approach (plus lots of unpaid fines, cautions and community service) had taken it to nearly 65,000. Now it is a little more than 85,000.
These places are far from being ‘holiday camps’. That is not the problem. Many of them are terrifying because the authorities have lost control, and the nastiest inmates are in charge. I often wonder how those who are so squeamish about executing a few vicious murderers feel about the monstrous annual tally of despair – the prison suicide rate, now more than 100 a year.
But our bulging prisons are full in spite of huge numbers of crimes not reported because nobody is interested, of crimes ignored by the police, of offenders cautioned but not arrested, of ‘restorative justice’, of decisions not to prosecute by the CPS, suspended sentences, probation orders, automatically halved sentences, tagging and other devices for keeping criminals out of prison.
It’s quite simple. The feebler you are, the more crime you get. And in the end the crime so outstrips the space in prisons that you more or less give up. That is what we have done. And if we don’t rediscover our nerve, our prisons and our country are heading fast towards the Third World, but without the sunshine and the beaches.

This is all the bitter fruit of the secular left hegemony in the West. And we all suffer as a result. Some words of wisdom from those in the past are worth bearing in mind in this regard:

“Punishment is not for revenge, but to lessen crime and reform the criminal.” Euripides

“Punishment is justice for the unjust.” Saint Augustine

“He who does not punish evil commands it to be done.” Leonardo da Vinci

9 Replies to “Crime and (No) Punishment”