While most secular lefties today would want nothing to do with such (in their view) outdated notions as the Ten Commandments, they in fact still cling to a few moral absolutes which they insist must remain inviolate. One of them especially stands out like a sore thumb: “Thou shalt not offend anyone”.

This is the one commandment these folks demand above all else. They think they have some sort of universal and absolute right never to be offended, and woe to those who dare to offend. These folks insist that they must be protected from any form of offence, and want swift punishment on anyone who is deemed to be offensive. 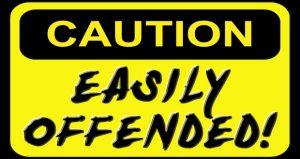 This of course is all part of rampant political correctness and the war on truth. The only thing that matters for these delicate little petals is that their feelings are not hurt. But the trouble is, they take offence at anything and everything. It is a Brave New World of thought crimes, hate speech, and thought police.

Everyone must be super careful about what they think or say, lest the Offence Police go after them. It is getting to the point where we dare not say anything about anything, for fear of upsetting and offending someone. No wonder so many folks never open their mouths any more – they fear the consequences for merely expressing a point of view.

Free speech and free thought is now verboten in our Big Brother world of “acceptable” thought and speech. Dare to resist the official PC orthodoxy and you will be punished. Examples of this are now legion, and I have featured plenty of them on my site. Consider two more recent cases of this insanity in action – once again found on our college campuses.

The first story, from the UK, is a real shocker, with the headline alone enough to make you question the mental state of those in charge there: “Bible students are warned…you may find the crucifixion too upsetting!” Here is how this story begins:

Theology students are being warned in advance that they may see distressing images while studying the crucifixion of Jesus, giving them a chance to leave if they fear being upset. It is part of a trend at a number of universities for ‘trigger warnings’ issued by tutors to let students know about course content that might prove disturbing. Advocates say it helps to protect the mental health of vulnerable students. But critics say it is creating a generation of ‘snowflake’ students unable to cope with the harsh realities of the world.
The University of Glasgow, part of the elite Russell Group, confirmed that trigger warnings are issued to theology students studying ‘Creation to Apocalypse: Introduction to the Bible (Level 1)’. According to university documents, a lecture on Jesus and cinema sometimes ‘contains graphic scenes of the crucifixion, and this is flagged up to students beforehand’….
Students are told ‘you can, of course, leave a class at any time should you need to, but please check in… later that day to let us know how you are’.

The article offers other examples at the university where trigger warnings are provided. Thankfully not everyone was impressed with all this. Liz Smith, a Scottish Tory education spokesman put it this way: “Universities are meant to be a place of learning where concepts are challenged and tricky subjects debated. That will become increasingly difficult if they go too far out their way to ensure everything survives the politically correct test. Some of the examples set out here are patently ridiculous.”

They certainly are. But it seems Western universities are now specialising in such ridiculous and moronic PC foolishness. Consider another UK school where the stranglehold of political correctness is destroying higher education and turning students into perpetually offended cry-babies:

They are titans of philosophy, without whose work an understanding of the subject is all but inconceivable. But now students at a University of London college are demanding that such seminal figures as Plato, Descartes, Immanuel Kant and Bertrand Russell should be largely dropped from the curriculum simply because they are white.
These may be the names that underpin civilisation, yet the student union at the world-renowned School of Oriental and African Studies (SOAS) is insisting that when studying philosophy ‘the majority of philosophers on our courses’ should be from Africa and Asia. The students say it is in order to ‘decolonise’ the ‘white institution’ that is their college.

Good grief. Um, isn’t that a form of racism? Oh yeah, I forgot: only whites are guilty of racism it seems. Thankfully there were a few level-headed voices to be heard in protest. British philosopher Roger Scruton for example said this:

This suggests ignorance and a determination not to overcome that ignorance. You can’t rule out a whole area of intellectual endeavour without having investigated it and clearly they haven’t investigated what they mean by white philosophy. If they think there is a colonial context from which Kant’s Critique of Pure Reason arose, I would like to hear it.

And Sir Anthony Seldon, the vice-chancellor of Buckingham University said this: “There is a real danger political correctness is getting out of control. We need to understand the world as it was and not to rewrite history as some might like it to have been.”

The university used to be a place of learning, of gaining knowledge, of being exposed to differing ideas and perspectives, but today it is largely about enforcing a radical secular left agenda and forcing students into a diabolical groupthink, with no deviation allowed from the accepted ideology.

As Thomas Sowell once put it, “Education is not merely neglected in many of our schools today, but is replaced to a great extent by ideological indoctrination.” Or as Scruton put it elsewhere: “Tenured professors enjoy all the privileges of the academy in return for relentless debunking of the civilization that made this possible.”

In a 2000 essay on “The origins of political correctness” William S. Lind said this: “The totalitarian nature of Political Correctness is revealed nowhere more clearly than on college campuses, many of which at this point are small ivy-covered North Koreas…”

All this spells not only the death of higher education, but the death of the West. As Malcolm Muggeridge put it, “Whereas other civilisations have been brought down by attacks of barbarians from without, ours had the unique distinction of training its own destroyers at its own educational institutions, and then providing them with facilities for propagating their destructive ideology far and wide, all at the public expense.”

It is getting to the place where concerned parents who want their children to be able to think and reason, and not emote and always feel offended, had best keep them out of most Western universities. Scary times indeed.

14 Replies to “A Generation of Offended Snowflakes”