When I first became a Christian I started to seriously read the Bible for the first time. One thing that struck me right away were the warnings Jesus gave in the gospels about how his disciples would face persecution. Those were very alarming things that he said, and as a brand new Christian, I wondered how that would play out in my lifetime.

Back then I thought of some obvious candidates of this, such as Christians being persecuted in communist countries. I did not really think that the West would become the sort of arena about which Jesus was warning. But it certainly has. All over the West anti-Christian bigotry and persecution is breaking out, and some of the worst of this is coming from the militant homosexual activists.

I have documented this numerous times now both in many dozens of articles and even in books. And it keeps getting worse. So let me offer two more recent cases of rather blatant anti-Christian bigotry being carried out by the rainbow activists. The first has to do with a street preacher in Scotland who was arrested for speaking biblical truth on the issue of homosexuality. 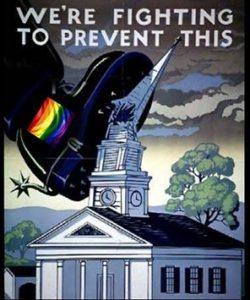 One report on this shocking case is worth quoting in full:

A Christian street preacher was locked up and charged with a hate crime for quoting from the Book of Genesis in response to a gay teenager’s questions on how God views homosexuals. Gordon Larmour, 42, spent a night in custody and faced a six-month ordeal over the charges before they were finally thrown out in a hearing last month.
The father-of-one, who has been street preaching for seven years following his conversion to Christianity, was handing out leaflets in his home town of Irvine, Ayrshire, last June when a group of young men passed him, The Telegraph has reported. He told the men: “Don’t forget Jesus loves you and He died for your sins.”
One asked Mr. Larmour, “What does your God say about homosexuals?” He responded by referring to the Book of Genesis, stating that God had created Adam and Eve to produce children. The two men argued and Mr. Larmour claims that he was chased by the young man. However, it was he who was arrested and frogmarched to the police van before being held in police custody overnight, charged with threatening or abusive behaviour aggravated by prejudice relating to sexual orientation.
“I think the police should have handled it differently and listened to what I had to say. They should have calmed the boy down and left it at that,” Mr. Larmour told the Scottish Herald on Sunday. He added: “In court the boy’s friend told the truth – that I hadn’t assaulted him or called him homophobic names. I had simply answered his question and told him about Adam and Eve and Heaven and Hell. Preaching from the Bible is not a crime.”
At Kilmarnock Sheriff Court last month, Sheriff Alistair Watson agreed, acquitting Mr. Larmour of the charge. He also found him not guilty of a second charge of assault aggravated by prejudice relating to sexual orientation.
Mr. Larmour said: “I can’t see why I was arrested in the first place – it was a massive overreaction and a waste of everyone’s time. The police didn’t listen to me. They took the young homosexual guy’s side straight away and read me my rights.
“I feel they try so hard to appear like they are protecting minorities, they go too far the other way. I want to be able to tell people the good word of the Gospel and think I should be free to do so. I wasn’t speaking my opinions – I was quoting from the Bible.”
Andrea Williams, chief executive of the Christian Legal Centre, said: “It is a great relief that the judge ruled in favour of Gordon, because the case simply did not stand up to scrutiny.”

There have been many other cases of Christians seeking to share truth in the public arena, only to be arrested and jailed for doing so. That sure sounds like the sort of things Jesus warned about when he said that Christ-followers would be hauled before magistrates and so on.

The second story involves one brave Christian woman who I have written about several times before, including here: billmuehlenberg.com/2015/02/24/barronelle-stutzman-knows-just-what-we-are-up-against/

Sadly her saga is an ongoing one, with the latest court move against her a major concern. Here is the latest instalment in her story:

The Washington Supreme Court ruled unanimously Thursday that a florist who refused to provide services for a same-sex wedding broke the state’s anti-discrimination law, even though she claimed doing so would violate her religious beliefs.
Barronelle Stutzman, a florist in Richland, Washington, had been fined by a lower court for denying service to a gay couple in 2013. Stutzman said she was exercising her First Amendment rights.
But the court held that her floral arrangements do not constitute protected free speech, and that providing flowers to a same-sex wedding would not serve as an endorsement of same-sex marriage.
“As Stutzman acknowledged at deposition, providing flowers for a wedding between Muslims would not necessarily constitute an endorsement of Islam, nor would providing flowers for an atheist couple endorse atheism,” the opinion said. Stutzman’s lawyers immediately said they would ask the U.S. Supreme Court to overturn the decision.

The National organization for Marriage said this about the ruling:

In an expected but nonetheless exceedingly disappointing decision, the Washington state Supreme Court ruled today that the state may punish a Christian florist, Barronelle Stutzman, for declining to violate her religious beliefs and be forced into participating in a gay ‘marriage’ that is against her religion. This outrageous ruling confirms what we have been saying ever since the US Supreme Court illegitimately redefined marriage in its Obergefell decision — the religious rights of people of faith are being systematically sacrificed on the altar of political correctness and LGBT extremism.

The legal defence group assisting her, the Alliance Defending Freedom (ADF), said this: “This case is about crushing dissent. In a free America, people with differing beliefs must have room to coexist. It’s wrong for the state to force any citizen to support a particular view about marriage or anything else against their will. Freedom of speech and religion aren’t subject to the whim of a majority; they are constitutional guarantees.”

So we need to see how this case pans out. We need to keep her in prayer. I am not sure many other Christians could stand strong for four years as she has against the raging militants who are out to get her. She sure needs our support. And she certainly confirms what Jesus said about persecution being the lot of his real followers.

The only other thing to say is where are all the Christians speaking out on this? Not just these particular cases, but the whole raft of anti-Christian activism? We are losing our freedoms all over the place simply because we are staying silent on the things that matter. Michael Brown has just penned a new piece on the Stutzman decision. His closing words are worth sharing here:

Where is the righteous Christian indignation? And where are the bleeding-heart liberals who claim to care about the persecuted underdog? (Remember: The ACLU with its massive resources is leading the charge against Barronnelle.)
I can respect Christian leaders who try to stay out of the culture wars because they don’t want to drive their LGBT neighbors and friends away from the gospel — as long as they speak up at times like this, when our fundamental liberties are being trashed and when a gracious Christian grandmother is being savaged by the state. But should they remain silent at a time like this, the next time they raise their voices on behalf of the LGBT community (and against the conservative evangelicals they so frequently attack) they will be shouting one message to the world: “I am a hypocritical coward!”

Exactly right. The only thing worse than the ugly crackdown on Christianity is the shocking silence of those who should be speaking out for their faith and for religious freedom.

11 Replies to “The Ongoing Homosexual Persecution of Christians”