Until recently no one had any good reason to write an article about bathrooms. Why would they have? Sadly however, bathrooms have now become a hot topic, all because of the radical gender bender wars which are raging all around us. Because we have come to the place where people think they can pick their sex by mere whim, we now have bathroom wars.

Men pretending to be women are now using female bathrooms, locker rooms, change rooms, shelters, jails, and so on, and women and children are being put at risk. Whenever radical transgender laws are passed, we put our most vulnerable members of society in harm’s way.

I have documented many cases of this happening in the past few years. And it just keeps getting worse. A new report shows how bad things are getting, and it is worth sharing one news report on this. It begins: 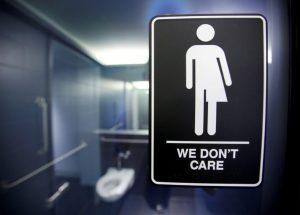 The conservative Family Research Council has compiled a list of 21 incidents of men assaulting or violating women’s privacy in public bathrooms, warning that despite what activists claim, transgender-friendly policies do increase the risk of such crimes.
FRC wrote in its issue brief that non-discrimination laws that allow people to go into bathrooms based on their gender identity, rather than their birth sex, are giving sexual predators the opportunity to exploit the circumstances and commit voyeurism and sexual assault.
“It is important to note that the concern is not that transgendered individuals are more likely to be sexual predators, but rather that sexual predators could exploit such laws by posing as transgendered in order to gain access to women and girls,” FRC clarified.
“Beyond this, when companies such as Target implement any-sex bathroom/dressing room policies, it encourages criminals to take advantage of these policies to commit crimes,” it added. The group noted that transgender activists have “scoffed” at suggestions at this heightened risk, and have denied that many such incidents occur.
With that in mind, FRC compiled a list of 21 cases reported in the U.S. stretching back to 1999, but most within the last 10 years, where men violated the privacy of women in bathrooms, locker rooms, and other private spaces.
The most recent case was reported on Jan. 17 by WPRI, concerning a man who mounted a camera inside the family bathroom at a Target store in Lincoln, Rhode Island.
Umit Cakmak, 41, of Providence, was arrested by Lincoln police and charged with video voyeurism, with reports noting that the man already had an active warrant for the same crime. In a similar case from July 2016 in Idaho Falls, a man who identifies as transgender was arrested on one count of felony voyeurism for taking photos of another woman changing clothes at a Target store in Ammon.

It is quite clear that the dangerous trans agenda is harming women and children. Yet the activists don’t care about that – they will keep pushing their radical biology-denying and reality-denying activism. And regrettably we see far too many clueless – or malicious – folks jumping on the bandwagon: schools, the media, politicians, corporations and so on.

Consider one leading American sporting body, the National Football League. It seems it has decided to give sports a miss, and concentrate on radical sexual politics instead. The NFL has especially been pushing this moonbattery in Texas in an ongoing battle over the legality of trans bathrooms.

The National Football League may have met its match in Texas as it again interjects itself into a state legislative battle between big business and grassroots pro-family activists fighting to keep biological men out of female restrooms.
Celebrities are also getting involved, with Lady Gaga, Alicia Keys and dozens of others signing a letter against the proposed Texas Privacy Act, SB6. Under the bill, a citizen could incur a civil penalty if he or she enters an opposite-sex public restroom in government schools, buildings and universities.
It also would protect companies from having “transgender” bathroom policies imposed on them by local LGBTQ laws.
Homosexual activists led by the Human Rights Campaign are engaged in a massive blitz against SB6, working with pro-LGBT corporations like American Airlines to replicate their crusade against similar legislation in North Carolina.
NFL spokesman Brian McCarthy told the Houston Chronicle last week that enactment of the Texas Privacy Act could keep future Super Bowls out of the Lone Star State.
“If a proposal that is discriminatory or inconsistent with our values were to become law (in Texas), that would certainly be a factor considered when thinking about awarding future events,” McCarthy said in an email to the Chronicle on SB 6 reported Feb. 9.
“The NFL embraces inclusiveness,” McCarthy said. “We want all fans to feel welcomed at our events, and NFL policies prohibit discrimination based on age, gender, race, religion, sexual orientation, or any other improper standard.”

Yeah right. I love how these guys rattle on about “inclusion” and making everyone feel “welcomed”. They sure are not being inclusive of the great majority of Americans who do not buy the trans madness, and want their women and children to feel safe when out in public places.

The NFL sure is not welcoming all those who take a different view to this anarchistic sexual agenda. Indeed, it seems to have now gotten unhinged on all such things, and is pushing the homosexual agenda big time. As another recent report states:

While some NFL players made their progressive political views front and center last season, the NFL, or at least most of its team owners, propagated conservative causes that may have contributed to the ongoing perception that the league breeds a culture of exclusion and even homophobia.
It appears now that the NFL wants to shed that image. On Tuesday, just in time for Valentine’s Day, the league teamed up with the Ad Council to release a spot for the ongoing “Love Has No Labels” campaign,” which seeks to stamp out issues such as homophobia and racism by promoting a culture of diversity and inclusion. The ad includes two same-sex couples locking lips for the “Kiss Cam.”
“Kiss Cams have been a part of sports culture for years,” the ad’s text reads in front of a shot of a sunset sky over Orlando’s Camping World Stadium, where this year’s Pro Bowl was played. “At the 2017 NFL Pro Bowl in Orlando, they became a part of something bigger.”
The spot, titled “Fans of Love,” proceeded to zoom in on what appeared to be a straight couple in the stands before the man looked to his right and laid one on the guy next to him. The camera followed, veering to the real couple, which garnered a mix of surprised yelps and a few gasps from others in the stands.
The ad, which also featured interracial couples and people with disabilities, later showed a lesbian couple kissing. One of the women’s T-shirts read “Orlando survivor” in rainbow lettering, referring to the attack on the Pulse nightclub last year at which a lone gunman killed 49 people.
The ad continues with text that reads, “Love has no religion, love has no age, love has no gender, love has no disability, love has no race,” and it ends with the words “love has no labels” and “rethink bias at lovehasnolabels.org” over a plain black screen.

Oh good grief. That last moronic paragraph alone would justify every bizarre type of sexuality around, be it polyamory, incest, bestiality, and so on. After all, “Love is all that matters”, so anything goes. This is nothing but a war on sanity, a war on biology and a war on marriage and family.

How many more people must suffer before we wake up and take back our culture? And don’t pretend that these are just some concerns put forward by the “religious right”. Many folks are greatly concerned about all this trans radicalism. Let me provide just one clear example of this:

If you have a spare hour, this powerful video presentation should really help you grasp just what is at stake here. In it, a very diverse group of people discuss why women and children are greatly endangered by gender bender ideology. Ryan Anderson said this about it:

“Here’s a video of today’s panel discussion featuring a rape survivor, a lesbian, a feminist activist, a stay-at-home mom, and a conservative. They disagree about most everything. But they agree that biology isn’t bigotry. Take an hour to watch this enlightening conversation.”

Please have a look:
www.youtube.com/watch?v=Rt9DW4e1Cvw&feature=youtu.be