Around the time of the American Civil War, Abraham Lincoln was asked if God was on his side. His response is a classic: “Sir, my concern is not whether God is on our side; my greatest concern is to be on God’s side, for God is always right.”

Lincoln actually thought much about this matter. For example, he wrote a “Meditation on the Divine Will” in which he said: “In the present civil war, it is quite possible that God’s purpose is something different from the purpose of either party.”

All that is good advice, and we should heed these wise words. As I am now reading through the book of Joshua again I just came upon some rather similar words. Joshua has just been confronted by a person of great authority with sword drawn, so like an alert sentinel, he asks him: “Are you for us or for our enemies?” The answer Joshua received was quite interesting to say the least.

But first some background to this story: Israel had just finished their 40 years of wilderness wanderings, and had crossed the Jordan River into the Promised Land. They were now about to begin occupying the land promised by God to their forefathers. The first city to be taken was Jericho.

But just prior to this a supernatural being (possibly an angel, but most likely God himself) appeared to Joshua. In Joshua 5:13-15 we have the complete account of this:

Now when Joshua was near Jericho, he looked up and saw a man standing in front of him with a drawn sword in his hand. Joshua went up to him and asked, “Are you for us or for our enemies?” “Neither,” he replied, “but as commander of the army of the Lord I have now come.” Then Joshua fell facedown to the ground in reverence, and asked him, “What message does my Lord have for his servant?” The commander of the Lord’s army replied, “Take off your sandals, for the place where you are standing is holy.” And Joshua did so. 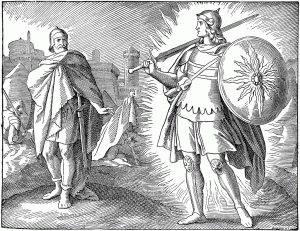 Falling face down and being told to take one’s sandals off is of course reminiscent of when Moses met God at the burning bush (Exodus 3:5). The reply may seem curious, since God certainly was with Moses and then Joshua to take the Promised Land.

God often will show up in a big way before his people are about to do something important for him. But we still dare not be presumptuous. Thus the answer the divine messenger gives may appear to be rather odd at first. As David Howard remarks:

“The stranger did not answer Joshua’s question directly. With his no he was stating that his interest was not the same as Joshua’s, which was to know if this man was for him or against him.” He further explains: “The NIV’s ‘neither’ implies that the man was telling Joshua that he was not on anyone’s side, yet surely he was indeed on Israel’s side. The point here is that Joshua was asking the wrong question.”

Even with hundreds of years of divine promises concerning the land as a divine inheritance, there was still need to guard against presumption and reliance on self. One spiritual truth presented here is that we need to keep in mind that ultimately God is not beholden to our plans, our campaigns, our causes, and our agendas.

What does matter is that we are in sync with his. We often have great objectives, goals and activities we wish to undertake for God. But these may not always be things that God is behind or in favour of. Or he may be leading us, but the issue of timing and so on must be kept in mind.

Thankfully he does pass the test: “Joshua falls to the ground in reverence for God’s presence in the divine messenger. He stops grilling the messenger and asks simply for the divine word brought to him. He sees that the divine commander is not automatically tied to either army. The question is always, which army is devoted to the divine commander?”

Indeed, one important principle found throughout the Old Testament is the truth that Yahweh often fights for Israel, but sometimes he fights against Israel. Many verses could be offered here on this. For example, a bit later in the book we find this: “All these kings and their lands Joshua conquered in one campaign, because the Lord, the God of Israel, fought for Israel” (Josh. 10:42).

However not long after that we read this frightening account: “In his anger against Israel the Lord gave them into the hands of raiders who plundered them. He sold them into the hands of their enemies all around, whom they were no longer able to resist. Whenever Israel went out to fight, the hand of the Lord was against them to defeat them, just as he had sworn to them” (Judges 2:14-15).

So there is no guarantee that God is always on our side. James Montgomery Boice said this about the text in question:

The point of the exchange seems to be that it was not for Joshua to claim the allegiance of God for his cause, however right it was, but rather for God to claim Joshua. The two would fight together, but Joshua would be following the commander of the armies of the Lord in his cause and battles rather than it being the other way around.
This is a most profound principle. Christians have a tendency to marshal God for their programs rather than simply follow him wherever he leads. As a result, the God they speak of seems to many outsiders to be quite partisan rather than the God of all men and women, which he truly is.

Thus Lincoln had it quite right when in humility he wanted to make sure that he was on God’s side. That is a lesson Joshua had to learn, and it is a lesson all of us have to earn as well.