Yesterday I wrote a piece asking, “Whose Side is God On?” I looked at an episode in the life of Joshua, and quoted Abraham Lincoln who, when asked if God was on his side, said this: “Sir, my concern is not whether God is on our side; my greatest concern is to be on God’s side, for God is always right.”

The concept of God as a warrior who fights for his people against his enemies is found throughout Scripture. A classic text on this is found in Exodus 15. There we see a song of praise by Moses and Miriam to Yahweh because of the exodus in general and the miraculous Red Sea crossing in particular. 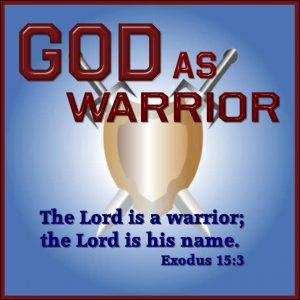 In this song God is celebrated for defeating Israel’s enemies (“Both horse and driver he has hurled into the sea” – verse 1). But 15:3 explicitly describes the divine fighter: “The Lord is a warrior; the Lord is his name.” We see the divine warrior motif running not just through the Old Testament, but into the New Testament as well.

The idea of God fighting on behalf of Israel, defeating his enemies, goes back to the Mosaic Covenant as enunciated in Deuteronomy 28. There we find a list of blessings for obedience, and curses for disobedience. More precisely, the first 14 verses deal with the blessings for obedience, while the rest of the verses (15-68) contain all the curses for disobedience.

The first thing to note is there are far more verses devoted to the curses than the blessings. This alone should provide pause for those Christians today who want to claim holus bolus all the blessings, while pretending there are no corresponding curses. But I deal with all this in more detail here: billmuehlenberg.com/2015/01/03/misappropriating-old-testament-blessings-and-curses/

The particular verses about God, Israel and enemies, and covenant responsibilities, are these:

Deut. 28:7 The LORD will grant that the enemies who rise up against you will be defeated before you. They will come at you from one direction but flee from you in seven.
Deut. 28:25 The LORD will cause you to be defeated before your enemies. You will come at them from one direction but flee from them in seven, and you will become a thing of horror to all the kingdoms on earth.

All this is stated pretty clearly. If Israel walks in obedience and the fear of the Lord, Yahweh will fight for them. If Israel disobeys and breaks the covenant, Yahweh will fight against them. And we see this happening all throughout the OT. The taking of Canaan, as described in the book of Joshua, is just one place where we find this taking place.

And it is found early on in the book. In Josh. 5-6 we read about the fall of Jericho. The Lord certainly was fighting for Israel. But in the very next chapter (Josh. 7), we read about the debacle at Ai where Israel is routed by its enemies. So what happened?

Chapter 7 also discusses the sin of Achan, who took for himself prohibited plunder, and because of this violation of the covenant conditions, Deut. 28:25 came into effect. This sin is dealt with – severely – and then we read in Josh. 8 that Ai is again besieged by Israel, but this time victory is theirs. Here we see Deut. 28:7 in action.

Consider just three more victories as found in the book of Joshua. It is clear that Israel was victorious because God was fighting for them:

Joshua 10:14 There has never been a day like it before or since, a day when the Lord listened to a human being. Surely the Lord was fighting for Israel!
Joshua 10:42 All these kings and their lands Joshua conquered in one campaign, because the Lord, the God of Israel, fought for Israel.
Joshua 23:10 One of you routs a thousand, because the Lord your God fights for you, just as he promised.

But sadly we read of other times when Israel is defeated because God has now become an enemy to them. One such passage is Judges 2:14-15:

In his anger against Israel the Lord gave them into the hands of raiders who plundered them. He sold them into the hands of their enemies all around, whom they were no longer able to resist. Whenever Israel went out to fight, the hand of the Lord was against them to defeat them, just as he had sworn to them. They were in great distress.

Just one more, this time from Jeremiah 21. A sinful and rebellious people of God were under siege by king Nebuchadnezzar and the Babylonians. Judah’s King Zedekiah sends some representatives to Jeremiah to ask if God will be with them. “Perhaps the Lord will perform wonders for us as in times past so that he will withdraw from us.”

This is the terrifying reply they received (vv. 3-7):

But Jeremiah answered them, “Tell Zedekiah, ‘This is what the Lord, the God of Israel, says: I am about to turn against you the weapons of war that are in your hands, which you are using to fight the king of Babylon and the Babylonians who are outside the wall besieging you. And I will gather them inside this city. I myself will fight against you with an outstretched hand and a mighty arm in furious anger and in great wrath. I will strike down those who live in this city—both man and beast—and they will die of a terrible plague. After that, declares the Lord, I will give Zedekiah king of Judah, his officials and the people in this city who survive the plague, sword and famine, into the hands of Nebuchadnezzar king of Babylon and to their enemies who want to kill them. He will put them to the sword; he will show them no mercy or pity or compassion’.”

Wow, scary stuff. The lesson is clear in both cases: when God fights for you, victory is assured. When God fights against you, you are toast, and nothing can be done about it. These are lessons which all believers today also must keep in mind.

As hinted at above, the physical, material blessings and curses promised to ancient Israel are not exactly applicable to Christians today (read the article I linked to for an explanation of this). But the spiritual principles certainly still apply. We cannot expect God’s great blessings when we live in disobedience and rebellion.

There are plenty of warnings in the New Testament about presuming upon God, and vainly thinking he will overlook or ignore wilful sin and defiance. So we must take such warnings seriously. Let me mention just one important book on this discussion.

Back in 1995 Tremper Longman and Daniel Reid wrote an invaluable book called God is a Warrior (Zondervan). Chapter Three is about “God Is an Enemy; The Wars Against Unfaithful Israel.” They conclude this chapter in part with these words:

God was not at Israel’s beck and call in warfare. He would not provide the victory for them in any and every situation. They had to obey the covenant; otherwise, they were liable to God’s judgment. At such times God turned against Israel as an enemy. This reversal of holy war came about particularly when the king trusted his weapons more than the Lord (Isa. 30:15-16; Amos 2:13-16).

Commenting on the Judges 2 passage I mentioned above, K. Lawson Younger said:

There is little wonder that God becomes angry with the Israelites. We must remember that his anger is not unrighteous as ours often is. Rather, it is always consistent with his character, with all his attributes. It is his just response to flagrant spiritual adultery and involves his desire to bring Israel to repentance, not to punish (as our anger does). In the same way, there is little wonder that God is displeased and angry with many Christians today for their apostasy from his Word.

While Christians today must be very careful not to presume upon God’s grace and risk his displeasure, it is quite true of course that there is a clear message here for the non-Christian as well. As Philip Graham Ryken remarks concerning the Jer. 21 passage:

God can perform miracles, but Zedekiah did not deserve one and would not get one. Zedekiah was a fool. He thought he could ignore God his whole life and still get saved at the last minute. His example is a strong warning to everyone who feels secure but has not yet accepted Jesus Christ as King….
Sometimes God does perform miracles. Sometimes he saves people on their deathbeds. But don’t count on it, especially if you do not heed God’s warnings in the meantime. Do not expect God to hear you then if you refuse to repent now.

6 Replies to “Is God Fighting For Us or Against Us?”