Christians can be real nutters at times. They may think they are being faith-filled disciples of Christ but sometimes they are just plain idiots! They are not in fact exercising great faith, but are demonstrating great foolishness, gullibility and presumption.

We have far too many examples of this sadly. It seems to happen all the time. I just came upon one such case, although it appears to have taken place last year. But it is still a doozey of a tale, so it is worth running with. The story is as follows:

A church leader had his buttocks mauled by a lion after running towards a pride in a bid to prove the ‘Lord’s power over animals’. Alec Ndiwane, a Zion Christian Church prophet, was attacked on a safari while trying to show that God would save him in front of fellow church members.
He is said to have fallen into a trance and started speaking in tongues before charging at a pride of lions feeding on an impala in South Africa’s Kruger National Park. But as Mr Ndiwane sprinted towards them, the lions immediately viewed him as prey and zeroed in.
Realising the Lord wasn’t about to help, Mr Ndiwane fled back to the car, but not before one of the lions clamped down on his buttocks. He was only saved from further injury or possible death when the game ranger fired shots to scare the lions off, it was reported by GhanaWeb.
He said: ‘I do not know what came over me. I thought the Lord wanted to use me to show his power over animals. Is it not we were given dominion over all creatures of the earth.’ Mr Ndiwane was rushed to hospital for emergency surgery to stitch up his wounds and was later discharged.

The fellow in this sad tale is not a believer with weighty spirituality or great faith, but weighty ignorance and great stupidity. Indeed, anyone who at all knows their Bible should have this passage racing in their head at this point. I refer to Deuteronomy 6:16: “Do not put the Lord your God to the test”. 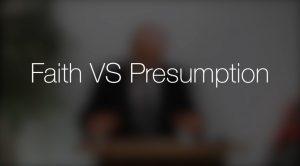 While we all can get a laugh out of such a story, the problem is, such presumptuousness and foolishness tarnishes the name of our Lord and our faith. People rightly think Christians are a bunch of kooks when they do this sort of stuff. And there would be way too many other stories like this.

A while back I wrote about a silly Christian snake handler who – wait for it – died after handling poisonous snakes. In that case you had a bad case of presumption along with some lousy hermeneutics. I wrote it up here: billmuehlenberg.com/2012/06/02/difficult-bible-passages-mark-1617-18/

I mention these cases because I just read about more such presumption while finishing up the book of Judges. In Judges 20 we read about how the Israelites sought to punish the Benjamites. The previous chapter speaks about a horrific crime the Benjamites had committed, so now this is payback time.

But the first two campaigns end up in disaster. Even though they asked God three times, it becomes clear that presumption and rebellion were tied up in the first two requests. Here is how the first request went: “The Israelites went up to Bethel and inquired of God. They said, “Who of us is to go up first to fight against the Benjamites?”

The result? Verse 21 tells us: “The Benjamites came out of Gibeah and cut down twenty-two thousand Israelites on the battlefield that day.” Oh dear. Daniel Block offers this comment:

On the surface the fact that the Israelites approach God for guidance in the conduct of the war appears hopeful. But the manner in which the narrator casts the inquiry raises several concerns. First, the Israelites do not ask, “Shall we go up against our brother?” but “Who shall go up first?”

Or as Barry Webb remarks, “They are already committed to the war, and God’s approval is assumed. So they ask a purely procedural matter: How is the campaign to be conducted? Who will lead the others into battle?” After their nasty defeat, their second question is somewhat less cocky, self-assured and presumptuous.

It is found in verse 23: “Shall we go up again to fight against the Benjamites, our fellow Israelites?” But again, they only get bad results after they are given the go-ahead: this time eighteen thousand are killed. Trent Butler discusses what is amiss here:

Somehow the oracle sends them forth to battle in answer to an improper question with no evidence of priestly involvement or ritual preparation. . . . A corrupt priesthood, worship at places without the symbol of God’s presence, desperation searches for oracles affirming action already determined, lamentation without sacrifice – all lead to defeat and desperation.

The third question is found in v. 28: “Shall we go up again to fight against the Benjamites, our fellow Israelites, or not?” This time, finally, they are victorious. That seems to be because this time they wept, presented sacrifices, went through the High Priest, and were given a divine promise of victory. But as Webb asks, At what cost? He writes:

So justice has finally been done – or has it? There are huge, perplexing moral issues here. The concubine’s death has been avenged. Retribution has been visited on the rapists and on those who protected them. But at what cost? More than fifty thousand fighting men have died, plus all the civilians…

Elsewhere Webb offers this sober conclusion: “Judges begins and ends with war, but at the beginning Israelites fight Canaanites; here they fight Benjaminites. Israel has failed in the war of conquest, and turned on itself, and Yahweh is not pleased.”

As mentioned, the whole of the book of Judges is one long miserable affair, with the results of sin, disobedience, unbelief and pride on full display. Indeed, the very last verse of the book (21:25), simply says this: “In those days Israel had no king; everyone did as they saw fit.”

They sure did. There was no real faith here, no real obedience. There was plenty of foolishness and presumption. They may have thought that they were right with God but they were anything but. Today we have the same thing happening: people claiming to be followers of Christ who do their own thing, do not properly inquire of the lord, and assume that he will be with them.

This is not faith and obedience. It is foolishness and presumption. And it always results in a bad outcome. Whether being defeated by the enemy (or in this case, a fellow tribe of Israel), or having your bottom torn into, presumption will always get you into strife.

7 Replies to “Faith, Foolishness and Presumption”