All Christians should be devoted students of the Word of God, and that includes the Old Testament. The 39 books of the OT comprise a full three quarters of our Bible, so those who are not reading and studying it are massively missing out on God’s truth. 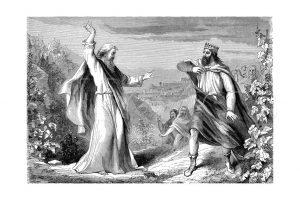 Many things can deter Christians from reading through the OT such as long lists of genealogies or long lists of laws. Another possible deterrent are the rather confusing and complex portions of historical narrative, especially about the various kings and kingdoms. These bits are admittedly difficult to get one’s head around, at least without a bit of help along the way.

Thus this article. Trying to properly understand six crucial historical books in particular (1 & 2 Samuel, 1 & 2 Kings and 1 & 2 Chronicles) does require some assistance. So here I seek to make things a bit more clear for those who want to get a grasp of what these books are saying.

Much of the difficulty lies in getting a handle on the chronological order of the events described in these six books (really just three long books, each divided into two portions). And trying to tie in the latter prophetic books with these earlier historic books is also a challenge. So let me seek to discuss both in a rather brief and outline-ish fashion.

Here are some rough dates of what we find early on in these six books:

The divided kingdom is covered in 1 Kings 12 through to the end of 2 Kings (which list the northern and southern kings), and in 2 Chronicles 10-36 (which only lists kings of Judah in the south). All up we have 38 kings and 1 queen covered:
-19 kings (18 kings and 1 queen) in the north (Israel), all of whom were bad.
-20 kings in the south (Judah) who were a mixture of good and bad kings.

-Rehoboam – he went with wrong crowd
-Asa – he had faith in man, not God
-Joash – he lost his godly influence
-Amaziah – he became complacent after victory
-Azariah – he became proud and disobedient
-Jotham – he did not show whole-hearted obedience
-Josiah – he picked the wrong fight

One of the tests of a good king was whether he destroyed the high places of the Canaanite gods, and centralized the worship in Jerusalem:
-Of the northern kings, only Hoshea and Shallum made an attempt to do so.
-Of the southern kings, only Hezekiah and Josiah did the best. Six others suppressed idolatry but did not remove the high places. The other 12 did nothing.

As to the actual history of the kings, it is never easy to always get exact dates for each one, but we have some fairly good understanding of when they reigned. While debate still exists over some of the details here, the following offers a fairly reliable guide to the kings and their reigns:

Various charts exist on the kings of the divided kingdom. Here are a few helpful ones:

If the exact dates and relationships between the various kings can be difficult to pinpoint, things get even more complicated when we try to match them up with the various prophets who ministered during their reigns.

There are various ways to get a handle on the prophets and when and where they ministered. One way is to list them roughly in chronological order:

Another way is to list them roughly in geographical order

What is helpful (but all rather complex) is to seek to carefully align the prophets and the kings, so we get the bigger picture of how both interact. There are numerous charts out there which seek to do this, trying to make sense of all the biblical data. Here are just three of the more helpful charts available:

Lessons to be learned from the kings

The record of the kings is not meant to just be dry history with no relevance to believers today. It contains plenty of spiritual truths and spiritual lessons that Christians must take to heart. Let me mention just a few. One lesson is the importance of godly and righteous leadership (and the dangers of ungodly and unrighteous leadership).

Often we find this being said about a king: ‘the king did this, and the people followed…’ The people can follow examples both for good or ill:

In the same way of course we can have influence over others – either good or bad. It is always worth asking ourselves if we are having a godly influence or an ungodly influence. Another lesson found here is that children may not always turn out the way their parents did. Sometimes they do, sometimes they don’t. Consider some of these examples:

Much more can be said by way of introduction to these six historical books, but hopefully this helps to make things a bit more intelligible, and whets your appetite to go and read through these books – along with the entire Old Testament.