I had not planned on doing a piece on Le Pen and the French presidential election until closer to the final election on May 7. But a brand new article by a friend has spurred me on to write something now (more on him and his piece in a moment). Let me first offer some background.

The French presidential election is a bit different than some. If a candidate had won over 50 per cent of the vote in the first round, he or she would have won the election. But the April 23 vote did not give us such a result, and of the eleven main candidates, only four emerged as clear leaders:
-Emmanuel Macron of the centrist En Marche! won 24% of the vote.
-Marine Le Pen of the rightist National Front won 21%.
-François Fillon of the centre-right Republicans won 20%.
-Jean-Luc Mélenchon of the far left La France Insoumise (“Rebellious France “) won 19%. 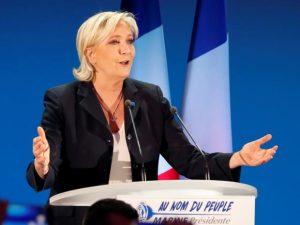 So now Macron and Le Pen will be in the second round. They will do a televised debate on May 3 with the second round of the elections on May 7. Of interest is how both these candidates represent non-mainstream parties. En Marche! (“Forward!” or “On The Move”) was founded just a year ago.

The populist National Front has been around since 1972, founded by Marine Le Pen’s father, Jean-Marie Le Pen. As will be seen below, Marine is seeking to distance herself from the more radical elements of her father. But she has been doing very well in the polls of late, and as Islamic terrorism increases in France, so does her popularity.

She is calling for an end to EU membership, a crackdown on immigration, and a hard line on Islam. Macron is pro-EU, and would basically be another business as usual candidate on some of these issues. The fact that Fillon was not all that conservative is shown by the fact that after his loss he immediately threw his support to Macron instead of Le Pen.

Of interest is the personal life of Macron. At age 15 as a student he fell in love with his high school teacher Brigitte Trogneux, 24 years his senior, and had an affair with her. She was married at the time and had 3 children. The two married a few years later.

Le Pen and the Jewish question

The National Front is known as an anti-Semitic group. It certainly was that under Le Pen’s father. But Marine has moved away from the party’s history, and even had her father expelled from the party. She has also booted out others with anti-Semitic views, and has courted the Jewish vote.

Thus he obviously has a clear interest in Le Pen and the elections. So he has just penned a piece called “Marine Le Pen and the Jews of France: It’s Complicated But Clear”. I basically concur with it, but want to tease a few matters out a bit further, since it is indeed complicated.

He worries about her party and her father, although he acknowledges that she is moving away from many of the bad aspects of both. He agrees that she is right to take a strong stand against Islam, which most certainly is anti-Semitic, but he worries that she is clamping down on Jews too, for example by forcing both groups to abandon unique religious coverings in public. He writes:

Le Pen advocates banning Jews from wearing a kippah in public. She also wants to make it illegal for French nationals to have an Israeli passport. And why shouldn’t a Jewish man be allowed to wear a head-covering? And what about his beard, if that is part of his religious identification? Must he shave his beard too? And is Le Pen requiring Catholic priests and nuns not to wear their ritual attire? For that matter, is she requiring Catholics not to wear crosses? If not, why single out religious Jews? Why not deal with radical Muslims as such without penalizing everyone else (including moderate Muslims)?

I too deplore religious moral equivalency, but here we may need a bit more nuance, as well as a bit of historical perspective. This issue is part of the broader issue of how we can protect religious liberty while also dealing with things like jihadist Islam.

And in France this is not new. Back in 2004 a so-called “headscarf law” was passed there. It banned people from wearing overt religious symbols in public schools. This included not just Islamic religious coverings, but Christian crosses, Jewish religious emblems, Sikh turbans, etc. So it covered all religious groups, even though Islam was the chief focus of the law.

Back then I was of two minds about the legislation. Some religious leaders here applauded the decision, but I said that when we target one religious group we can easily end up targeting all religious groups. So the rights of religious freedom need to be balanced with the interests of national security.

Now I and Brown would both agree that when it comes to concerns about religious-inspired terrorism and bloodshed, there is only one group to worry about. As he states:

Why not deal with radical Muslims as such without penalizing everyone else (including moderate Muslims)? Where are the Jewish terrorists in France? How many have murdered policemen in cold blood while shouting out pro-Israeli slogans? How many have rammed trucks into civilians, slaughtering dozens? How many have massacred scores of concert-goers? How many have attacked restaurants and killed as many diners as they could? How many have broken into magazine headquarters and butchered anti-Jewish journalists?

Quite so, and the exact same thing could be said about Christians. So here I agree that we may need to single out genuine threats, even though that may be difficult, or it may seem to be discriminatory. But when it comes to national security, there is a real place for discrimination properly understood.

The simple truth here is this: A Jew or Christian can be an exemplary and loyal citizen of the country they live in while still being a devout and observant Jew or Christian. That cannot however be said of Muslims. A devout, observant Muslim can never give allegiance to an infidel Western nation. He is at war with it.

They have to serve Allah alone and work toward establishing sharia law everywhere, no matter how it clashes with Western law. So targeting Muslims who are a genuine threat in terms of both bloody jihad as well as stealth jihad is a sensible and proper position for Western nations to take.

In this sense I agree with Brown, but I would simply remind him of the background to what Le Pen has been saying. She is simply reflecting long-established French thinking about such matters.

That leaves us with a few broader questions. How should conservatives and Christians think about her – especially if they happen to live in France? What we have here is in many ways a replay of what has been happening around the Western world of late: think Brexit, think Trump, think the rise and rise of Geert Wilders in Holland.

This is part of a massive protest vote: the voters are getting real tired of the mainstream parties and looking elsewhere. They are looking for someone who is not just a part of establishment politics, and who is willing to kick some butt if need be. Le Pen of course fits the bill.

She is similar to Wilders, and Trump for that matter, in that none of them can be called historic conservatives, or Christians. All three are basically secular and have some decidedly liberal views. Wilders for example is pro-homosexual and is a real mix when it comes to conservative principles.

Both Wilders and Le Pen are very aware of, and quite good about, the dangers of Islam of course. So along with Trump, all three have made strong calls for greatly restricting immigration and securing their nations. All three have been campaigning on nationalism, populism, border protection, and taking a tough stance against Islamic terrorism.

Of course on other issues Le Pen is hardly a strong, principled conservative. As the Catholic conservative commentator John Zmirak has written just recently:

Let’s get it out of the way right now: There’s a lot not to like about Marine Le Pen. Her father’s a quasi-fascist who doesn’t like Jews. Though she threw him out of the party he founded, some stalwarts with like views still linger. Her economic plans are more of the same: big government, slow growth, paternalism. She’s irreligious, and wants to keep the status quo on abortion. (With its laws made by a parliament, not courts, France is much more protective of unborn life than the U.S. But early abortions are legal, if much less common than in America.)

But he goes on to say that she may be the right man (woman) for the job at this time. He speaks of “The New Free French and the New Vichy Elites”. He writes:

The de Gaulle example rings truest. France is being occupied once again. Not just by “foreigners.” France has always welcomed, digested, and Frenchified its foreigners. No, it’s being occupied by militant, Jew-hating adherents of a totalitarian movement which Adolf Hitler admired: political Islam. Marine Le Pen has concrete, realistic plans to take back her country from Islam. These plans do not violate the natural law. In fact, they fit in with what the Catechism of the Catholic Church officially teaches on immigration.
Given the alternative, every Christian should support Marine Le Pen. When their dhimmi bishops or pastors denounce them, they should offer those pastors one-way tickets to Mosul, Iraq.
The casualties of terrorist attacks in France have climbed from the dozens into the hundreds. Large sections of French cities are off-limits to non-Muslims, just as surely as German officers’ barracks were off limits to Frenchmen in 1941. Jews are fleeing the country for safe havens abroad. Priests are being murdered at their altars. It’s all happening again.
And again, the French establishment, the comfortable men who have profited from the slow-motion conquest of their country, are rallying to the occupiers. They are smearing and denouncing the courageous souls who shame them. (Remember that the Vichy government sentenced de Gaulle to death, in absentia.) These collaborators are desperate not to see themselves exposed.

That is one view of how we should look at Le Pen. Others will have different views. But we all can agree with Zmirak when he closes his piece by saying that we need to pray for France and this vitally important election.

14 Replies to “Thoughts on France and Marine Le Pen”