The Christian life is meant to be based on faith, not on feelings. Followers of Jesus are to seek to know and understand God and what he desires of us and then act upon that. Thus we are to use our minds to read and study God’s Word and use our wills to obey it.

Yet sadly there are millions of Christians who seem to base their entire Christian life on how they happen to feel at any given moment. The idea of living their lives in alignment with the Word of God and engaging in daily disciplines to become more Christlike seems to elude them. 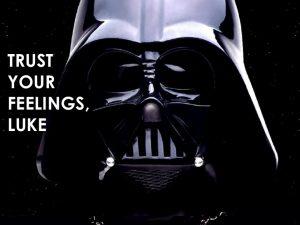 We all have seen blatant examples of this. We all have heard of so-called believers defending even clearly defined sinful activities because it “felt right” to them. How many nominal Christians for example engage in things like fornication because it ‘feels so good’ and ‘seems so right’?

I encountered another example of this the other day on the social media. One popular Christian writer whose books are becoming more and more heretical by the day had a film made of one of his earlier books. Christians are flocking to see the movie just as they did his book.

I saw one group of Christian women absolutely gushing over the film. There was zero rational and intellectual assessment or discussion of the film. Everything said about it was entirely on an emotional level: ‘It touched my heart.’ ‘It really moved me.’ ‘It made me feel so good.’

On and on they went like this, simply reporting on their emotional reaction to the film. There was not an ounce of theological or biblical interaction with the film. It was as if their brains turned to mush while watching the film. Or perhaps they simply checked their brains at the door before going in to the theatre.

Their biblical discernment seemed to be nonexistent. Their ability to think critically and offer a rational and biblical evaluation of the film (and book) seemed to be quite beyond them. Their only frame of assessment was how they reacted emotionally.

If a homosexual came along and offered a sob story about how he really wants to marry but he can’t because of our “discriminatory” and “unloving” laws, why do I suspect that these sorts of Christians would fully side with him, no questions asked?

Why do I suspect that if a Muslim came to their church and said he worships the same God and he would like to read the Koran and pray in Arabic in their congregation’s worship service, these Christians would find it a pretty cool idea and think it was “Christlike”?

It certainly is not mushy emotionalism and sappy sentimentalism. Christians should know better than to depend on their feelings. Yet we have plenty who are doing this very thing. And that is why so much of the church today is in such a wretched condition.

A Christian mind and biblical discernment have been replaced with emotion. Such believers emote their way through life, and if something feels good they will run with it, and if it feels bad they will reject it. That is simply a recipe for disaster.

Thankfully God’s choice servants throughout church history have known the dangers of all this, and have warned against it. Let me finish by simply offering a few of their wise words here on these matters:

“It is Christ who is to be exalted, not our feelings. We will know Him by obedience, not by emotions. Our love will be shown by obedience, not by how good we feel about God at a given moment. And love means following the commands of God. ‘Do you love Me?’ Jesus asked Peter. ‘Feed My lambs.’ He was not asking, ‘How do you feel about Me?’ for love is not a feeling. He was asking for action.” Elisabeth Elliot

“There is nothing so deluding as feelings. Christians cannot live by feelings. Let me further tell you that these feelings are the work of Satan, for they are not right feelings. What right have you to set up your feelings against the Word of Christ.” Charles Spurgeon

“Obedience means marching right on whether we feel like it or not. Many times we go against our feelings. Faith is one thing, feeling is another.” D.L. Moody

“Faith has nothing to do with feelings or with impressions, with improbabilities or with outward experiences. If we desire to couple such things with faith, then we are no longer resting on the Word of God, because faith needs nothing of the kind. Faith rests on the naked Word of God. When we take Him at His Word, the heart is at peace.” George Mueller

“Sight is not faith, and hearing is not faith, neither is feeling faith; but believing when we neither see, hear, nor feel is faith; and everywhere the Bible tells us our salvation is to be by faith. Therefore we must believe before we feel, and often against our feelings, if we would honour God by our faith.” Hannah Whitall Smith

“Consecration is not the act of our feelings but of our will.” F.B. Meyer

And a final, longer quote from R. C. Sproul who calls these emotional believers “sensual Christians”:

Many of us have become sensuous Christians, living by our feelings rather than through our understanding of the Word of God. Sensuous Christians cannot be moved to service, prayer or study unless they “feel like it.” Their Christian life is only as effective as the intensity of present feelings. When they experience spiritual euphoria, they are a whirlwind of godly activity; when they are depressed, they are a spiritual incompetent. They constantly seek new and fresh spiritual experiences, and use them to determine the Word of God. Their “inner feelings” become the ultimate test of truth.
Sensuous Christians don’t need to study the Word of God because they already know the will of God by their feelings. They don’t want to know God; they want to experience him. Sensuous Christians equate “childlike faith” with ignorance. They think that when the Bible calls us to childlike faith, it means a faith without content, a faith without understanding. They don’t know the Bible says, “In evil be infants, but in your thinking be mature” (1 Cor. 14:20). They don’t realize that Paul tells us again and again, “My beloved brethren, I would not have you ignorant” (see, for example, Rom 11:25)
Sensuous Christians go their merry way until they encounter the pain of life that is not so merry – and they fold. They usually end up embracing a kind of “relational theology” (a curse on modern Christianity) where personal relationships and experience take precedence over the Word of God. If the Scripture calls us to action that may jeopardize a personal relationship, then the Scripture must be compromised. The highest law of sensuous Christians is that bad feelings must be avoided at all cost.

10 Replies to “Faith Versus Feelings”