Those who think there is far too much to read in the world – including on this site – would be greatly relieved if I simply followed in the footsteps of G. K. Chesterton. When an English newspaper asked him to write on the question of “What’s wrong with the world today?” he sent back a fully biblical and a fully brief reply: “Dear Sir, I am. Yours, G.K. Chesterton.”

I am afraid my reply will not be that brief or that witty, but I too want to discuss this matter. And it comes about because of something I recently read which made quite an impact on me. It was just a short phrase or two which was quite basic, quite elementary, and in many respects nothing very profound. Yet it struck me as I read it, and I am now turning it into an entire article. 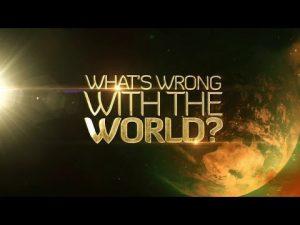 The writing which really jumped out at me for some reason – totalling less than twenty words – was from a foreword Michael Horton had written to a book penned by R. C. Sproul called Faith Alone (Baker, 1995, 2017). He had been discussing the core differences between the Reformers and the Catholics on the issue justification by faith alone – a key dividing point between the two groups.

Horton spoke of “confusion over the very meaning of the gospel”. He then went on to explain the gospel message as simple as possible: “How can I, a sinner, be accepted by a holy God?” Those eleven words really hit me. It occurred to me that while this was a major concern of most folks in the West 500 years ago, it sure is not today.

Indeed, everything about that phrase is now alien to most folks: the very idea of God and who he is, the concept of sin, the idea of holiness, and the need to be made right with God. All these thoughts are likely so very far from so many people today. And sadly that would include plenty of people who claim to be Christians as well.

The most important issue one could think about and discuss back then is now something very few even give a passing thought to. That, in a nutshell, seems to be what is wrong with the world today. Chesterton got it right: he knew about his own deep sinfulness, and that something radical was needed to be done about that situation.

The gospel message of course speaks to this very matter. And that is why the Reformation was such a big deal, as both sides thought the other side was misrepresenting and distorting the gospel. I am not interested in entering that particular debate here, as it has been done zillions of times elsewhere, but I would like to look at these key components a bit more closely.

Sadly for millions of Westerners today God plays no part in their lives. God is not thought about or spoken about (except as a curse word), and God is certainly not feared, worshiped and obeyed by millions of folks. And various census surveys indicate a rise in those with no religion.

That however does not necessarily mean we have zillions of atheists in the West. Those survey results simply mean that many people no longer identify with a particular church or denomination. They may well still be religious, or have some sort of notion of God or spirituality.

So even if God is still thought about by many, the question remains, which God? That is a very important question. The millions of impersonal gods found in some of the Eastern religions, such as Hinduism? A secular or non-god as found in Buddhism. An aloof, harsh and deterministic God as found in Islam?

Or the God of the Bible, who is both transcendent yet immanent? A God who is indeed holy, but reaches out to us in love, seeking to woo us back to himself? Getting the right understanding of God and who he is makes all the difference in the world.

And the God of the Bible is indeed a holy God. Far too many secular folks, and worse yet, far too many biblically illiterate Christians, view God as simply a loving, jovial grandfather in the sky. He exists to make us happy and to give us what we want. He is our celestial servant.

The idea that God is holy, pure, righteous, and implacably opposed to all that is not holy, pure and righteous is hardly found among so many people today. We have replaced the God of the Bible with one we have made in our own image. And that is a false god, an idol, and one that cannot save us.

But what do we need saving from? Ourselves, as Chesterton pointed out. More specifically, from our selfish and sinful way of life that is opposed to God and his ways. Sin is the disease and Christ is the Great Physician. But we don’t see the importance of a doctor – or at least we don’t seek one out – when we aren’t aware of any illness or sickness that we might have.

The first thing that must be done is to recapture an awareness of sin. But as C.S. Lewis reminds us, this can be trickier than we think: “It does not matter how small the sins are, provided that their cumulative effect is to edge the man away from the Light and out into the Nothing. Murder is no better than cards if cards can do the trick. Indeed, the safest road to Hell is the gradual one – the gentle slope, soft underfoot, without sudden turnings, without milestones, without signposts.”

Most folks today have no conception of such matters. But the simple truth is, we are sinners who are alienated from God and in desperate need of restoration. We are under the wrath of God for our sin and rebellion, and something needs to be done about it, ASAP.

Be accepted by God

And that is the gospel message. Men and women are in need of reconciliation. We need to discover how we can be accepted by God. How can we overcome the sin problem? How can we be made right with God? Those are the most important questions anyone can ask.

And the gospel provides those answers: The Son of God came to earth, lived a perfect life, took our place on the cross, died for our sins, and rose again. Those who turn from their sins and come to Christ in faith can find new life and acceptance with God. That is good news.

These are the very things we should be thinking long and hard about. Instead we have allowed ourselves to be occupied with a million distractions and trivial pursuits, so that God, his demands, and our required response, are the things we don’t think about – often until it is too late.

Let me offer more of what Horton went on to say about all this. He said that the question ‘how can a sinner be accepted by a holy God’ “sent the hearts of those who really knew themselves and their own wickedness racing.” He continued:

If such questions no longer disturb the conscience of the average person (including the Christian) today, it is not because God’s Word has changed but because we have been seduced by our culture into asking the wrong questions. It is not the gospel that is irrelevant but we who, in spite of our feverish activity, proudly assert ourselves as the Red Cross Knight driving back the forces of darkness. The only torch that will enlighten our dark age is the gospel, which we now consider an impediment to our very progress.

Whether people are even thinking in these terms matters little. A person driving along a country road without a care in the world, unaware that a bridge just ahead around the corner is out, will not have such dangers anywhere in his mind. But he needs to be aware of this whether he wants to or not.

Our job as Christians is to warn the sinner that they are headed for a lost eternity unless they get right with God through Christ. Whether they want to hear such things or not does not really matter. The bridge up ahead is out, and if we really love our non-Christian neighbour, we will warn them of impending danger.

As I and Horton hinted above, plenty of Christians are equally oblivious to what the Christian faith really entails. As an illustration, just as I was about to post this article I saw a brand new piece by my American friend and colleague Michael Brown.

Here is a person claiming to be a disciple of Jesus Christ yet engaging in activities and a lifestyle that clearly tell us otherwise. She sadly makes my point: plenty of so-called believers are just as clueless about the one true God and what he demands of us as are millions of non-Christians.

Both are in desperate need to hear the truth about God, their sinful condition, and how they can be rescued out of it. That in good measure is why this website exists. The truth matters, and the truth of the gospel is indispensable for every single one of us.

5 Replies to “This Is What Is Wrong With the World”