Yes you read that right. And you are likely as incredulous as when you read the title of an article I penned five years ago: “Pepsi and Dead Babies” (see link below). It seems an Australian company is actually taking leftover baby embryos from the in vitro fertilisation process and turning them into jewellery. Seriously! Here is how one article tells the story: 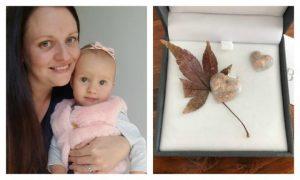 The difficult decision of what to do with the unused embryos after a cycle of IVF has been solved by an innovative Australian company. After a six-year IVF journey to receive miracles Lachlan, 4, and 21-month-old twins Charlotte and William, Belinda and Shaun Stafford didn’t know what to do with their remaining embryos. Their babies.
Donation wasn’t an option, the annual storage fee was an added financial strain, and disposing of them unimaginable. So when the NSW couple heard about Baby Bee Hummingbirds, an Australian company turning embryos into keepsake jewellery, they jumped at the chance. Now Ms Stafford has all of her babies with her every day – including seven embryos in her heart-shaped pendant worn close to her heart, always….
Amy McGlade, founder of Baby Bee Hummingbird, said since starting in 2014, they have crafted over 4000 pieces of jewellery using breastmilk, placenta, hair, ashes, or cord stumps – including 50 made with embryos. They cost anywhere from $80 to $600, depending on the piece, and can be sent worldwide. “I don’t believe there is any other business in the world that creates jewellery from human embryos, and I firmly believe that we are pioneering the way in this sacred art, and opening the possibilities to families around the world.”

Another article says this about the Australian business:

Baby Bee Hummingbirds Jeweller claims on social media, “We are experts and true original leaders in Embryo Ashes DNA Jewellery. We are working with a number of local and international fertility clinics to raise awareness of this option for families.” The company is offering a 15% discount to those who use the code EMBRYO15 on jewellery “crafted with embryos.”

The couple mentioned in the first article said this:

After completing our family, we looked into the donation of our remaining embryos. I wanted to keep having more babies but the emotional toll, plus financially it was too much. Donating our embryos wasn’t an option for us and I couldn’t justify the yearly storage fee. I’d heard others had planted them in the garden but we move a lot, so I couldn’t do this. I needed them with me….
Finding this has brought me so much comfort and joy. I finally at peace and my journey complete. My embryos were my babies – frozen in time. When we completed our family, it wasn’t in my heart to destroy them. Now they are forever with me in a beautiful keepsake.

Wow, what mind-boggling mental and moral gymnastics are on display here. Um, earth calling couple: your baby HAS been destroyed. I had a look at the company website but it did not seem to reveal any information about the process of receiving embryos and converting them into jewellery. But we do know that the cryopreservation of embryos must take place at sub-zero temperatures in expensive lab equipment, not in pieces of jewellery.

So we know that this jewellery does not contain living embryos. The embryo had to be destroyed somewhere along the line in order for this jewellery to be created. So why this couple or any other couple can gain any sense of satisfaction or comfort over what has occurred is beyond me.

This was once a living, growing unborn baby which has now been turned into a piece of decoration. Do people not even bother to think carefully anymore? I find this entire thing so horrific and gruesome. Others have already mentioned how the Nazis of course turned the human skin of Jewish and other prisoners into lamp shades and the like.

In both cases a living human being had to die so that some product could be manufactured. This is the endgame of the pro-death mob: the complete commodification and dehumanisation of human beings – in this case unborn babies. We have learned no lessons at all it seems from the Nazi medical and scientific monstrosities.

This is just another reason why we all should proceed very cautiously with things like IVF. As I have written in numerous articles already, the IVF industry is known for engendering all sorts of major moral problems. One is the deliberate creation of multiple embryos to get better success rates – more bang for the buck. So it is quite common for numerous leftover embryos to be on offer after these procedures.

Let me quote from my forthcoming book:

A related problem is that of “surplus embryos”. In order to achieve higher pregnancy rates, IVF technology involves a process known as superovulation. This process results in numerous spare embryos which are often frozen, in a process known as cryopreservation. It is estimated that there are currently 80,000 surplus embryos in Australia. At the end of 1999 the figure was 65,518.

Usually when a couple has had a baby through IVF, they tend to forget about the remaining embryos. There are several options concerning these surplus embryos:
-They can be implanted by the couple, and when birthed, they can be kept or left for adoption.
-They can be “given” (donated) to other infertile couples for implantation and birth. But many parents may be uncomfortable with this, and few choose that option.
-They can be killed and used for scientific experimentation. Increasingly scientists and biotechnology companies are urging this course.
-They can be discarded (flushed down the drain, eg.). Most couples who have babies through IVF choose this option.

As mentioned, in Victoria surplus embryos must be destroyed after five years of storage. In September 2005 a Victorian report stated that over 6,600 frozen embryos were destroyed because they passed their 5-year storage limitation.

The issue of a moral response in dealing with these surplus embryos is one not just Christians but all those concerned about the sanctity of human life must wrestle with. One option as mentioned above is embryo donation and adoption. There already exist organisations which help facilitate this process. One 2012 article for example talks about one such group in the United States:

-In 1997, Nightlight Christian Adoptions pioneered the first embryo donation and adoption program and named it the ‘Snowflakes Frozen Embryo Adoption Program’
-The program allows couples to donate their remaining unused embryos for others to adopt and then give birth to their adopted child.
-The group claims that there are over 600,000 frozen embryos in storage in the United States and the embryos matched by the Snowflakes program were donated by families who originally created them for IVF treatment.
-The group provides autobiographical information, medical health history, and pictures from the family whose embryos are adopted.
-Over 300 babies have been born through the Snowflakes Program to date since the birth of Elisha Lancaster in 2003.

In Australia such organisations exist as well, including: www.embryodonation.org.au/default.aspx

Admittedly there is still ongoing debate in some quarters about the ethics of embryo donation, but the alternatives (destroying them; destroying them for research purposes; or destroying them to turn into jewellery) are much worse. As I say above, this is yet another reason to take a long hard look not just at things like IVF but all forms of assisted reproductive technologies.

Racing ahead with the new biotechnologies while lagging behind with the necessary moral assessments of them is a recipe for disaster, and simply results in more ghoulish things like unborn baby jewellery.