Briefly stated, the biblical doctrine of inspiration states that God inspired the biblical writers in such a way that his true, infallible word is found in the original manuscripts of Scripture. This understanding is based on passages such as these:

-2 Timothy 3:16 All Scripture is God-breathed and is useful for teaching, rebuking, correcting and training in righteousness.

-2 Peter 1:20-21 No prophecy of Scripture came about by the prophet’s own interpretation of things. For prophecy never had its origin in the human will, but prophets, though human, spoke from God as they were carried along by the Holy Spirit. 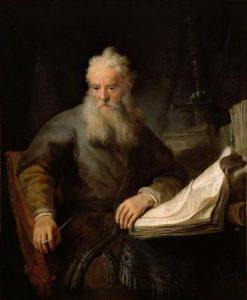 In the first text the English phrase “God-breathed” is the literal translation of the Greek word theopneustos. It is rendered “inspiration” in the KJV while the RSV uses “inspired of God”. And in the second, “carried along” is the English translation of a Greek verb which can also be rendered “moved by” or “driven along”. The Phillips version says: “men of God spoke because they were inspired by the Holy Spirit.”.

These are just two of a number of passages which speak of God inspiring men to write the Word of God. Much can be said about this concept of inspiration and what it means, but here I want to focus on just one aspect of all this: I wish to look at the issue of dual authorship of the bible.

Theological truths often involves extremes to avoid. When it comes to the doctrine of the inspiration of Scripture, we can err in various ways. On wrong path is to say it is merely a book written by humans and therefore does not differ from any other book, or set of books.

Enemies of the faith, as well as some very liberal theologians, may argue for this. On the other side of the spectrum can be found those who want to maintain the divine authorship of the Bible, but they do it in such a way that human authorship is almost eliminated, or at least greatly distorted.

When we argue for the divine inspiration of Scripture, we do indeed want to assert that the Bible is “God-breathed” as Timothy puts it, and it is indeed the very word of God. But God used human authors to get his truths across. So human authorship is also a part of this.

Some of the earlier defenders of inspiration tended to err on the side of God using human authors almost mechanistically, almost as robots. A faulty idea arose – which came to be known as the dictation theory – that the human writers were mere wooden secretaries dictated to by God.

Of course in a few cases we do have actual dictation, as when Yahweh dictated to Moses the Ten Commandments, etc (see Exodus 20) or when Jesus dictated to John the seven letters to the churches of Asia Minor as found in Revelation 2-3.

Later defenders of the doctrine said we should think of an “organic” rather than a mechanistic view of inspiration. They wanted to stress the dual authorship of Scripture, properly understood. Sure, God takes pre-eminence here, but real human involvement is nonetheless included.

Theologians refer to this as the concursive theory of inspiration in which both authors are clearly involved, while God still gets his complete and infallible truth fully stated in Scripture. Thus the human writers were not mere passive scribes, but fully involved in the writing of Scripture.

Let me here offer some quotes by some of our great theologians who have wrestled with all this, going back just over a century ago, and then bringing it up to today. Princeton Seminary theologian B. B. Warfield (1851-1921), in an 1894 article, “The Divine and Human in the Bible,” put it this way:

The fundamental principle of this conception is that the whole of Scripture is the product of divine activities which enter it, however, not by superseding the activities of the human authors, but confluently with them; so that the Scriptures are the joint product of divine and human activities, both of which penetrate them at every point, working harmoniously together to the production of a writing which is not divine here and human there, but at once divine and human in every part, every word, and every particular. According to this conception, therefore, the whole Bible is recognized as human, the free product of human effort, in every part and word. And at the same time, the whole Bible is recognized as divine, the Word of God, his utterances, of which he is in the truest sense the Author. The human and divine factors in inspiration are conceived of as flowing confluently and harmoniously to the production of a common product. And the two elements are conceived of in the Scriptures as the inseparable constituents of one single and uncompounded product.

Dutch Reformed theologian Herman Bavinck (1854-1921) wrote in 1895 about the organic nature of inspiration in which the “human has become an instrument of the divine”. He writes:

The difference in language and style, in character and individuality, that can be discerned in the books of the Bible has become perfectly explicable. . . . The use of sources, the authors’ familiarity with earlier writings, their own inquiries, memory, reflection, and life experience are all included, not excluded, by the organic view. The Holy Spirit himself prepared his writers in that fashion. He did not suddenly descend on them from above but employed their whole personality as his instrument. Here too the saying “grace does not cancel out nature but perfects it” is applicable. The personality of the authors is not erased but maintained and sanctified.

Three much more recent authors can be cited here. James Packer, writing in 1992, said this about the dual authorship of Scripture:

The idea is not of mechanical dictation, or automatic writing, or any process which involved the suspending of the action of the human writer’s mind. Such concepts of inspiration are found in the Talmud, Philo, and the Fathers, but not in the Bible. The divine direction and control under which the biblical authors wrote was not a physical or psychological force, and it did not detract from but rather heightened the freedom, spontaneity, and creativeness of their writing.
The fact that in inspiration God did not obliterate the personality, style, outlook, and cultural conditioning of his penmen does not mean that his control of them was imperfect, or that they inevitably distorted the truth they had been given to convey in the process of writing it down.

And John Stott, writing in 2003 (Evangelical Truth, IVP) said this:

We more clearly see man’s activity in this divine-human concursus when we look at how God frequently used the ordinary means of human life, even the peculiar and unique personalities, traits, background, and individual gifts of each author to bring about his message….
God does not merely communicate information through the human author, but he communicates the perspective, tone, and voice of the author as well. God often utilized the diverse experiences and personalities of the human authors, yet God’s use of human language and real human persons does not lessen the quality of Scripture or make it impure. To the contrary, God’s use of human language and human persons gives Scripture a rich diversity. Human authorship does not distort Scripture, like light passing through a dirty window, thereby causing it to cease being pure and holy. Rather, God prepares the path for Scripture by providentially forming the very personalities of those through whom he has chosen to communicate his Word. Surely if God can providentially control, sustain, and govern the cosmos, he can bring about his Word through human flesh. He did it with the incarnation; he did it again with Scripture.

There is still some mystery involved in how the perfect, sovereign God could use fallen and finite men to produce the truthful, inspired Scriptures. But that is what has happened. Having a proper understanding of the dual authorship of Scripture is a key component in getting these matters right.