I had a bittersweet moment this morning as I happened upon an online newspaper article dealing with one of our resident Marxists and sexual radicals. It contained some good news, but also some more worrying news. The piece was about the woefully misnamed ‘Safe Schools’ program, and its ideological architect, Roz Ward. 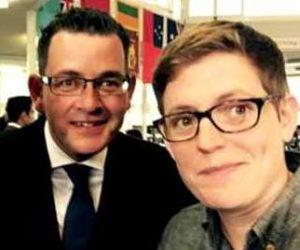 I have of course often written about him/her during the past few years, and the war being waged against our children by this perverted program. The hard-core secular left will use any means to target our children, destroy our families, and remake society into their own sordid image.

The article in today’s Australian was, as I say, a mix of good and bad news. The really good news is found in the headline: “Ward departs La Trobe following program’s scrapping”. That is a good start. The Victorian government took over the program in March, and is still running with it, albeit with a different name. But basically the same toxic content is still being pushed.

Of course this is by no means the last we will be hearing from her. Indeed, just a few weeks ago another tax-payer funded university proudly featured her, Victoria University. Just prior to the event their website readily featured her appearance. The piece began:

As part of Pride week (15-19 May), the VU Postgraduate Association (VUPA) presents this seminar on rainbow families. Are we paving the road for rainbow families? Join us on the eve of International Day Against Homophobia, Biphobia and Transphobia (IDAHOBIT) to listen to keynote speaker, the renowned Roz Ward, co-founder and manager of Safe Schools Coalition Victoria.

There will be no shortage of her being run with not only around the state but around the nation, and most appearances will be footed by us taxpayers. But let me get back to the Australian article and what we also find there. This is a real shocker, but not unexpected: the piece informs us that Ward is now claiming half of all kids are homosexual!

Yes you read that right. And this comes from the talk she just gave at Victoria University. As the article states:

Speaking at a Victoria University event organised for Pride Week last month, Ms Ward took aim at conservative politicians, academics and the Murdoch press (which includes The Australian), blaming them for the controversy over sexual and gender diversity program. She addressed her own “coming out” as a 16-year-old before talking about how the Safe Schools program aimed to challenge “heteronormativity”.
According to Ms Ward, the often-cited claim that 10 per cent of people were likely to be attracted to their own sex — a figure Safe School’s materials also relied upon — was a “joke”. “It’s more like 40-50 per cent of young people who are not exclusively attracted to the opposite sex,” she said. “That’s how fluid sexuality is headed.”

Wow, get a load of that. Let me remind you that militant activists rely on ‘lies, damned lies, and [dodgy] statistics’ to make their case. Bending the truth for the cause has always been the MO of activist groups. They do not care in the least about truth, facts, and evidence.

All they care about is pushing their nefarious agenda items by any means necessary. Fifty per cent! Ha! Why doesn’t she just go the whole hog and claim 100 per cent are? If you are going to shamelessly lie for your cause, why not go all the way?

And bear in mind that even the original 10 per cent figure was all a lie as well. As I carefully document in my book Strained Relations, homosexuals never did make up 10 per cent of the population. The figures have always been around 1 to 2 per cent. Let me quote a bit from my book:

Now do these numbers seem a bit high? They should. An issue of Newsweek admitted that the 10 per cent figure which sexologist Alfred Kinsey used was highly inflated: “Activists seized on the double digits to strengthen their political message. . . . Policymakers and the press adopted the estimate – despite protests from skeptical conservatives – citing it time and time again. But new evidence suggests that ideology, not sound science, has perpetuated a 1-in-ten myth.”

Homosexual activists have confirmed this to be a case of deliberate deception: “Based on their personal experience, most straights probably would put the gay population at 1% or 2% of the general population. Yet . . . when straights are asked by pollsters for a formal estimate, the figure played back most often is the ’10% gay’ statistic which our propagandists have been drilling into their heads for years.”

If the homosexual lobby is willing to use faulty statistics to support its cause, just how reliable is it in other areas? As one homosexual warned: “If you say a number that you can’t prove, there’s always the chance that by disproving one part of your argument, your opponents weaken you overall. I think that’s dangerous.” While it is understandable that a movement would want to overestimate its importance and influence, it is reprehensible that such large portions of the media parrot these figures, without doing their homework first.

It was Hitler’s propaganda minister Joseph Goebbels who once said, “If you tell any lie long enough, often enough, and loud enough, people will come to believe it.” The militant homosexual activists have clearly mastered this and turned it into a fine art form.

And it is not just Ward and her buddies who are bad news here, but of course the Andrews’ Labour government in Victoria which has promoted and pampered her for so long. Ward & Co would not have gotten so far were it not for Dan Andrews, the most radical socialist premier in all of Australia.

Let me now give some advice to my Labor colleagues in Victoria. The Safe Schools program that the Victorian Government is imposing on public schools in that state is political poison. While it may be just starting to show up in focus groups and other polling activities undertaken by the Labor Party, do not underestimate its malignancy. When it fully manifests, it will be like a fully laden freight train that you will not be able to stop.
The problem for the Premier and the Minister for Education is that the Safe Schools program from the get-go was never about anti-bullying. It was about inculcating into school children hard edged sexuality and gender ideologies. The same ideologies that are examined and debated when undertaking Gender Studies units at university. The same units that such students elect to do by choice; no compulsion or requirement. Not only are these ideologies being presented to school children as a matter of fact i.e. sexuality and gender are not to be understood in any other way, but parents are being kept completely in the dark about what is being presented to their children and by who.
The statement that it was never about anti-bullying but sexuality and gender ideology is not mine. They are the words of one of the original architects of the program, Roz Ward. You can see her boastfully making this claim on a short 2014 YouTube clip that many have seen.
Premier Andrews and Education Minister Merlino have been both doctrinaire and obstinate about the Safe Schools program. As a case in point, in March last year following a review of the resource material located on the Safe Schools Coalition Australia website it was recommended by the reviewer, Professor William Louden, that certain content was not fit for purpose. It was subsequently removed from the Safe Schools Coalition Australia website. In Victoria though the material that was removed from the website was immediately uploaded onto the state’s Department of Education and Training website, presumable under instruction from the Premier and/or Minister for Education. That material still sits on the Department’s website and is being actively promoted. In other words instead of taking into account what were rather modest recommendations by Professor Louden, the Victorian Premier and Education Minister got all hairy chested and gave the whole review exercise the middle finger.
Fast forward to mid-December last year, the Education Minister announces that the Andrews Government is cutting ties with La Trobe University and their now very well known, and controversial employee, Roz Ward. The spin put on the announcement by the Minister was that it was not about throwing the now badly damaged Roz Ward under a bus. The line given was that it “…was appropriate to bring it [the Safe Schools program] into the Department.” Even Blind Freddy could see through that one.
Why the Victorian Government cosied up to Roz Ward and stuck with her for as long as they did remains a mystery. Anybody without blinkers on could see that she was serious lead in the saddle-bag. If the truth be known, notwithstanding the Minister’s spin to the media, the decision to send her on gardening leave, never to return underscores that in the minds of the punters the Safe Schools program has progressed from being a bit wiffy to becoming seriously on the nose.

Now that is an utterly honest, deeply moral, and fully commendable Labor politician. I wish they were all like that. Well done Greg. But as I said, this pro-homosexual indoctrination program will continue in Victoria, simply under a different title.

As Donnelly reminds us: “Apparently the program is being currently delivered in 60% of public high schools in Victoria. The stated goal of the Premier and Minister for Education is to have it being delivered in every public high school by 2018. They have said time and again that it is a “universal anti-bullying program”. What that is code for is that they want it in every public primary school and once this is achieved, press for its delivery in independent and Catholic schools.”

Yes exactly right. This is not just about targeting only public schools, but getting every single school – including independent and religious schools – to toe the line. And home schoolers will also be targeted of course. So we must remain vigilant and alert here.

While Ward may be out of La Trobe, he/she is certainly not out of action. And as long as we have hard core cultural Marxists like Dan Andrews around, things will continue to deteriorate. Enough is enough. Share articles like this far and wide, and make sure you know what your children are being exposed to.

For the sake of our kids we dare not let down our guard. The other side sure isn’t, so neither should we.