With this year being the 500th anniversary of the Protestant Reformation (October 31, 1517 was when Martin Luther posted his 95 theses), plenty of new books have recently appeared to commemorate the event. One such work is a very helpful five-volume series on the five solas. 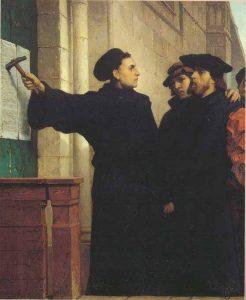 Not to be confused with the five points of Calvinism (forming the acronym TULIP), these five declarations really do cover the key emphases as elaborated upon by the leaders of the so-called Magisterial Reformation (Luther, Calvin, Beza, Knox, Zwingli, Bucer, etc).

Thankfully to help us in this anniversary year we now have “The 5 Sola Series”. The five books published by Zondervan to highlight and celebrate the significant Reformation emphases are these (in order of publication):

These books very nicely restate some of the major doctrinal emphases which emerged from the time of the Reformation. Taken together they provide a terrific overview of why the Reformation was so important and why these doctrinal truths do indeed matter – even today.

Let me speak to each of these books briefly.

Schreiner offers us a 300-page treatment of one of the core doctrinal points of the Reformation: justification by faith alone. The book is comprised of three very helpful sections: historical, biblical/theological, and contemporary challenges.

Like others in the Reformed tradition, Schreiner insists that bare faith – eg, mere mental assent – is not what is being promoted here. It is a living faith which results in good works. Thus Paul and James are both on the same page, insisting that genuine faith has works as its evidence.

As to contemporary challenges, there is of course not just Catholic teaching which takes a different take on all this, but more recent challenges, such as N. T. Wright and the New Perspective on Paul. He devotes two chapters to Wright, noting that his view on justification, in particular, imputation, certainly goes against traditional Reformed thought. That is, Wright agrees that God declares the believer righteous, but he disagrees that God imputes righteousness to him.

This is a very useful reformulation of the old doctrine, and covers quite a bit of helpful territory in a relatively brief volume. Well done to Schreiner for bringing together so much complex material into one clear and incisive work.

The longest book in the series (400 pages), the volume deals with much more as well, including various attacks on the Bible over the centuries; the importance of God’s word in redemptive history; and how the church can be renewed by returning to a strong view of biblical authority. Barrett really covers most of the key bases here.

It is thus a very helpful stand-alone volume, looking at the vitally important issue of Scripture and how we are to regard it, but also very nicely fits in with the other four books in this series. I am really impressed with the extent of effort put into this book. Yes, all the books in this series are excellent, but this may be the best volume, if such a determination can be made. (And I am still debating whether I should allow that sentence to go ahead!)

Wellum offers us a very helpful overview of Christology, looking at the person and work of Christ historically, biblically and theologically. He takes us back to the early church, examines the debates at Chalcedon, looks carefully at the Reformation and the conflicting views there, and brings us on up to today with the various debates over Christ and his ministry springing out of the Enlightenment (postmodernism, the various Jesus quests, etc).

This is a very comprehensive and well-articulated exposition of the major features of Christ according to Scripture, who he is and what he accomplished for us at Calvary. Wellum helpfully distinguishes the Protestant take on things from the Roman church of five hundred years ago, and alerts us to how things have developed since then.

The way he puts it in his introduction offers a nice summary: “From beginning to end, this book confesses with the Reformers that Jesus Christ bears the exclusive identity of God the Son incarnate and has accomplished an all-sufficient work to fulfil God’s eternal plans and establish God’s eternal kingdom on earth.”

Trueman begins by looking at what the Bible has to say about the issue of divine grace, and then goes into detail in examining how the theme developed throughout church history. He reminds us that theologians have referred to it as a relational attribute of God: “one that only exists in relation to something other than God. It describes an active disposition toward that other thing.”

In this volume he pays special attention to four towering figures: Augustine, Aquinas, Luther and Calvin. The battles between Augustine and Pelagius are looked at in some length, and in the chapter on Aquinas he reminds us that he is actually an “unexpected ally” of Protestants. While he is of course the great theologian of Roman Catholicism, he predated the Reformation, and had many emphases that followed on from Paul and Augustine, leading up to Reformation thought.

Many of his views on grace and even predestination make for a nice bridge between the two. As Trueman says in the conclusion to this chapter, “He was a valiant exponent of the priority of God’s grace and of the fundamentals of Augustine’s understanding of predestination, albeit expressed in a different philosophical idiom. He is an ally on one of the most important points in Christian theology: the sovereign priority of God in salvation.”

In the second part of the book he looks at how grace ties in with such things as the Word, the church, prayer, and the sacraments. He reminds us that being saved by grace alone is not a legal fiction, but has very real implications for the Christian life. It is clearly intended to lead to a transformed life, impacting both the head and the heart.

VanDrunen’s book may be the shortest in this collection (just under 200 pages) but it is by no means inferior in importance. Indeed, giving glory to God is at the heart of biblical belief, and most Christians would have heard of this famous Q&A: “Q. What is the chief end of man? A. Man’s chief end is to glorify God, and to enjoy him forever.”

This of course comes from the Westminster Shorter Catechism. Says VanDrunen, “Soli Deo Gloria can be understood as the glue that holds the other solas in place, or the centre that draws the other solas into a grand, unified whole.”

He looks at how God is glorified in the Incarnation, in salvation, and in the church, and he examines things like prayer and worship, and how we glorify God as we properly worship and adore him. This is a helpful volume to round off the set, and is a welcome addition to it.

All up this is an excellent series. It very capably restates the case for the key emphases of Protestant thought. One need not even be a Protestant to greatly benefit from what is contained in these 1500 pages. Indeed, Protestants of various stripes may not agree with everything found here as well.

But to get a good working grasp of what the Reformers believed, taught, worked for, and in some cases, died for, these books will be very useful indeed. Matthew Barrett, the series editor, is to be commended for bringing together this important collection of books.

While there are of course heaps of new volumes coming out this year – and the past few years, and likely the next several years – if you want to get a very good handle on the historical significance and theological importance of the Reformation, this would be the place to begin.

However, if some of you find just five books to be not nearly enough, and are eager for more, earlier this year I did put together a recommended reading guide on the Reformation, featuring around 40 key titles. You can find that listing here: billmuehlenberg.com/2017/02/11/reformation-500-years-reading-guide/

(Australian readers can find all these volumes at Koorong Books.)

[1517 words – and no, that word count was not originally intended!]