Another day, another Islamic terror attack. More innocent men, women and children slaughtered once again by devout followers of Islam. More blood on Western streets. More carnage and mayhem. This time it was on the streets of Barcelona, Spain.

So far we have at least 16 dead and over 100 injured. Once again a van driven by a Muslim raced down a busy walking street, slaughtering innocents and causing terror. Here is one news account of the terror that has again descended on our streets:

Here is what we know about the hunt for the suspect and the attack itself. Witnesses said the van jumped onto the centralised pedestrian area of Las Ramblas at a high speed and swerved from side to side, hitting pedestrians and sending people running for their lives.
At least 16 people have been killed but authorities expect that number to rise. There are 100 people injured, 15 seriously. One Australian woman, believed to be from NSW, is in a serious but stable condition in a Barcelona hospital. Two other Australians received minor injuries.
Witnesses said the driver of the van fled the vehicle on foot after the attack and did not appear to be armed.
An alleged getaway van was found in a neighbouring small town.
Spanish media are reporting the van had been rented by a man who has since turned himself in to police, claiming his documents had been stolen. Two men remain in custody, after being arrested in Ripoll and Alcana, two different towns in the Catalonia region. One of the men was Moroccan and the other was from the Spanish enclave of M 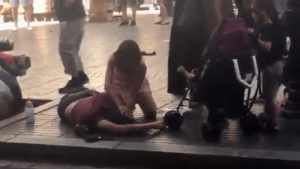 A personal account of someone who has been there and done that before is worth sharing here:

A Melbourne paramedic who attended to victims of the Bourke Street tragedy has told of the horror which unfolded on Las Ramblas. MFB Commander Graeme O’Sullivan was with his wife on the rooftop of their Barcelona hotel when the white van started mowing down pedestrians.
“We were up on the sixth floor roof terrace, just the pool area, enjoying a few drinks,” he told Nine News. “We could clearly hear thuds as the vehicle was running into people, and then a short time after that, obviously, several very loud sickening screams from the people involved down at street level.” Mr O’Sullivan said the similarity to the Bourke Street Mall event was chilling, describing it as a terrible scene.

And in a related episode, a counter-terrorism operation in another part of Spain prevented a similar type of attack:

Spanish media are reporting that the Cambrils terror suspects were attempting to carry out an attack similar to the one in Barcelona. Police thwarted the attack in a shootout which left four suspects dead and a fifth one injured. State-owned television network RTVE reported that the suspects had planned to drive a van at pedestrians in the seafront area of the coastal town which is a popular tourist destination south west of Barcelona.

The Barcelona attack is something that especially has me concerned. At one point some years ago I often walked up and down the Las Ramblas where this attack occurred. Back in late 1979 I and other young people on a mission trip daily used the 1.2 kilometre pedestrian area to the Placa de Catalunya in the heart of the city. It is a major tourist destination.

Every time another one of these horrific and diabolical terror attacks take place, I have to repeat a few simple truths. Let me do so again:

-We have a major problem with Islam.
-Islam is a political ideology which brooks no rivals.
-While there may well be many moderate Muslims, Islam is NOT moderate.
-Islam according to its own sources is a bloodthirsty religion which commands the death of the infidels.
-The West is under deliberate, sustained attack by this violent ideology.
-Yet most Western leaders are living in denial. They refuse to even acknowledge that we have a problem with Islam.
-They far prefer to ramble on about things like “Islamophobia” than the actual issues facing us.
-As such, these leaders are complicit in these terror attacks.
-Until the West wakes up and acknowledges that there is a sworn enemy of the West out there, ever at work, these attacks will simply continue.
-The time for making excuses for Islam is now over. We must take this threat seriously. Failure of Western leaders to do so is an act of treason.

And every time one of these attacks takes place, I also quote some shocking statistics. These numbers alone should wake up every single one of us, but so far they seem to be falling on deaf ears. So I will continue to run with these horrific figures. Since the September 11, 2001 terror attacks, there have been 31,590 deadly Islamic terror attacks carried out.

11 Replies to “Barcelona Terror: When Will We Wake Up To Islam?”