Imagine this scenario: a devout Christian conservative drives a vehicle full of explosives to the main headquarters of a key atheistic homosexual organisation and sets it off, seeking to cause the maximum amount of damage. How would the media and authorities treat this?

We know exactly how they would treat it. They would call this a hate crime, caused by evil Christian teaching, and demands would be made to radically rein in Christian churches. Even more mandatory anti-homophobia courses would be put forward, and calls would be made for Christianity to be further privatised with restricted public influence, given how dangerous it is.

The Age, the SMH, the ABC, the SBS, to name just a few of the media outlets, would all be baying for blood. There would be front page coverage of this story and every major television news network would cover it as their lead story for many days over. 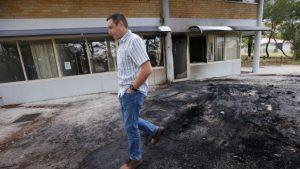 Opinion pieces would be written calling for a crackdown on Christianity and plenty of television programs would appear highlighting what a dangerous, intolerant and hate-filled religion Christianity is. And the police would be the first to say this had everything to do with ‘politics, religion and ideology’.

So has a Christian ever done this in Australia? No. But simply reverse roles here and we have a case that did indeed occur – and exactly as described above. But, the authorities and the media seem to have simply covered it up, lied about it, and lived in denial.

When the Australian Christian Lobby Canberra headquarters was attacked by a man late last year, the police instantly came out with the claim that this indeed was not “politically, religiously or ideologically motivated”. We now know this is 100 per cent false.

It had absolutely everything to do with politics, religion and ideology. We had an atheist homosexual leftist who hated the ACL and wanted to do it real damage. So we are left asking the police two obvious questions: Did you know anything about this guy before you made your very public statement?

In either case this is a very serious issue indeed. Either they were telling falsehoods when they knew what was really happening, or they just made things up when they should have waited until they were better informed. Shame. This is not how our police forces should be operating.

And just as a reminder, here is how the SBS ran with the story on December 22, 2016, just hours after the attack. It proudly went with this headline, “Police rule out targeted attack on Australian Christian Lobby office,” and it proudly opened with these words:

Police say the man believed responsible for the explosion at the ACL headquarters in Canberra wasn’t religiously or politically motivated. They are waiting to speak further with the 35-year-old man, who is in a Canberra hospital in a critical condition. “As a result of our conversations with the man, we have been able to establish that his actions were not politically, religiously or ideologically motivated,” ACT Chief Police Officer Mark Walters said.

The truth is now coming out big time as we are learning heaps about the guy who did this with some court documents appearing. Of interest, leftist papers like the Age seem to be running nothing on this story (I will be happy to be proven wrong on this). But thankfully the Murdoch media is giving it a good run. Consider this piece from the Australian. It begins:

The man accused of driving a burning van laden with gas bottles into the Australian Christian Lobby headquarters was a gay activist who disliked the group because of its “position on sexuality” and had searched online how to make plastic explosives and a pressure-cooker bomb.
Court documents tendered to the ACT Magistrates Court yesterday reveal Jaden Duong had also run searches about gay marriage in other countries and, a month before the alleged attack at 10.45pm on December 21 last year, had searched for the “Australian Christian Lobby”.
After the blast at the group’s Canberra headquarters in Deakin, which gutted the ground floor and caused $100,000 of damage, police said the attack was not “politically, religiously or ideologically motivated” and referred to it as a “car fire”.
ACL head Lyle Shelton disputed the police claims. Police allege 36-year-old Mr Duong had stepped up internet searching from July last year for terms including “how to make ammonium nitrate”, “pressure- cooker bomb”, “C4”, “how to buy a gun in Australia”, “gas leak explosion” and “how much gas to cause explosion”.
The US military uses C4, a plastic explosive, and ammonium nitrate has been used as an ingredient in terrorist bombs. Mr Duong also allegedly researched gay marriage in Israel and Germany and searched for “countries with gay marriage”.

The article goes on to give us much more information about this guy:

The Australian understands he previously had volunteered on the political campaign of a gay activist politician and for an LGBTI organisation in San Francisco. The former IT manager’s LinkedIn profile, which was taken offline earlier this year, said he had volunteered on California State Assembly member and gay activist David Chiu’s 2014 campaign for office and on Oakland Mayor Libby Schaaf’s 2014 campaign.
A person describing himself online as Jaden Duong was also a contestant in the Mr GAPA 2014 pageant hosted by the Gay Asia Pacific Alliance Foundation in San Francisco. Mr Duong’s LinkedIn profile says he volunteered for political organisation San Francisco Moderates and San Francisco-based social entrepreneurship organisation StartOut, which offers “education, networking, mentorship and access to capital in order to foster entrepreneurs and great business leaders in the LGBTQ community”.
The Australian can also reveal that a Jaden Duong joined the ACL’s email list on July 7 last year before unsubscribing on August 23.

It is terrific that we are finally getting some truth on this ugly episode. Thanks to the Australian for being willing to cover this story. It is interesting to see how other media outlets covered the story – if they did at all. The ABC did have a piece on this, but it was much, much shorter.

And it actually claimed the damage to the ACL building was just a mere $10,000, instead of the $100,000 figure cited in the Australian article. Much more revealing – and indicative of the usual ABC bias – was that no mention at all was made of the fact that he was an anti-religious bigot and an out and proud homosexual.

Lyle Shelton has said this about their story:

Channel 7 journalist Cameron Price has restored my faith in journalism. His tenacious pursuit of the truth is an example for others to follow. At the same time my confidence in the Australian Federal Police has been shattered. We bear no ill will towards Jaden but it is the job of the police to ensure the facts of such incidents are not suppressed. Public safety depends on this and they have let all Australians down.

As I say, just imagine how the tables would be turned if this hate attack was carried out on some secular left organisation by some Bible-believing Christian. He would likely already be languishing in jail by now – and for many years to come.

And the mainstream media would have beaten this story to death, warning us of the dangers of Christian hatred, bigotry and intolerance. There would be even more calls for ‘separation of church and state’ (although only applied to Christianity, not Islam), and churches would likely be having all sermons monitored by now for “hate” content.

So, will radical leftist, homosexual, and atheist groups get treatment like that? Will they be monitored for possibly inciting hate crimes? Um, I just don’t think so. According to our elites and MSM, there is only one source of bigotry and hatred: biblical Christianity.

Atheists, homosexuals and leftists it seems are incapable of ever generating any hate, bigotry and offence. That is how the narrative runs anyway.