Today there is a determined effort being made by some renegades and activists in the church to completely undermine and twist the scriptural position on homosexuality. A number of theological revisionists have appeared over the past half century arguing for a radically different understanding of the biblical prohibition against homosexuality.

What started with a handful of books appearing in the 50s and 60s has now opened up to a flood of pro-homosexual volumes and articles purported to be penned by Christians. But most of these are clearly apostates who have denied God and his word as they fully embrace the spirit of the age. 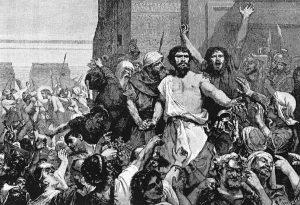 There are a number of texts found both in the Old and New Testaments that clearly and unambiguously condemn homosexuality. However all of these texts have been challenged by the revisionists, with any number of bizarre and twisted approaches taken.

The story of Sodom and Gomorrah (Genesis 18:20-19:29) is one obvious case in point. For most of Christian history it has been understood as a clear denunciation of homosexuality. However, a new spin on this event has recently come into vogue, with revisionists arguing that these cities were judged because of a lack of hospitality, not because of homosexuality.

They deny, therefore, 3,500 years of Jewish, and 2,000 years of Christian, tradition on this verse. Actually, it wasn’t until 1955 that this novel interpretation was first put forward by D. S. Bailey in his book Homosexuality and the Western Christian Tradition.

This interpretation, which many have followed since Bailey, states that the people of Sodom violated the important codes of hospitality, so prominent in the ancient Near East, in the way they treated the visitors. This interpretation is not altogether off the mark, as hospitality was indeed a very important social custom of the day in the ancient Orient, and to not be hospitable was a serious matter indeed.

This view, however, has some major drawbacks. First, totally destroying four cities (the cities of the plain were in fact five in total, according to Gen. 14:2, 8; 19:20-22, 29-30; Deut. 29:23; Hosea 11:8; Admah and Zeboim were destroyed along with Sodom and Gomorrah, while Zoar was spared, because of Lot) merely for the sin of not showing proper hospitality seems a bit rich.

As John Feinberg and Paul Feinberg state, this “would be a huge case of divine overkill! God simply doesn’t do that. The only interpretation that makes sense of the judgment meted out is that the men of Sodom wanted same-sex sexual relations that evening, even as they had habitually engaged in homosexual sex acts before.”

Second, according to the book of Jude, Sodom and Gomorrah fell because of “fornication and going after strange flesh” (v. 7). Jude 1:4-8 is rather explicit as to why God’s judgment broke forth: because of “sexual immorality and perversion”. The Greek term translated “perversion” in the NIV literally means, “going after other flesh” as the NASB for example renders it.

And 2 Peter 2:7-10 refers to the “sensual conduct of unprincipled men” at Sodom and Gomorrah. While homosexuality is not directly mentioned here, it is pretty clear that Peter has it firmly in mind. As Thomas Schreiner remarks, “Peter did not identify the sin of the cities but directed attention to their judgment. Probably there was no need to highlight the sin since it was well known both from the Scriptures and postbiblical tradition.”

Also, verse 10 speaks of “those who follow the corrupt desire of the flesh and despise authority”. But as Douglas Moo points out, “The NIV rendering of this first description is too mild. Peter piles up some very strong words; a literal rendering is ‘going after flesh in a passionate longing for defilement.’ The reference is to sexual sin, probably including, in light of Peter’s reference to Sodom and Gomorrah in verse 6, homosexuality.”

And the sexual sin is compounded by a despising and rejection of authority. As Witherington notes, “Judgment is especially reserved for those who commit grievous sexual sins (as at Sodom and Gomorrah) and despise dominion.”

Third, the word “sodomy” to this day refers to male homosexual activity. Surely one has to perform linguistic and logical somersaults to get away from the obvious meaning of the text here.

The liberal interpretation tries to avoid these issues by saying that the citizens simply wanted to get acquainted with the two visitors. The word “to know” in Hebrew is yadah. It is used 943 times in the Old Testament. True, the verb usually means to become acquainted with. But about ten or twelve times it means “to have sex with” (NIV).

The context here makes it clear how the word is to be used. Lot described the citizens’ desire to know the two visitors as a great wickedness (v.7), and shut the door behind him. And when he offered his own two daughters, he said they had not known a man.

Surely this does not mean they had never met, nor were acquainted with, men. The parallel story in Judges 19 also makes it clear that the desire of the men of Gibeah to “know” their victim was not a mere acquaintance, but a sexual encounter. What they proposed is described as “wicked, vile and disgraceful”.

As Victor Hamilton puts it, “when Lot responds by offering his daughters ‘who have never known a man’ (v. 8), it becomes clear that the issue is intercourse and not friendship. Lot would never have made such an unusual suggestion if the request was only for a handshake and moments of chitchat.”

But some other revisionists seek to argue that it is homosexual rape that is condemned here, not just homosexuality in itself. In his important commentary on Genesis Victor Hamilton offers four compelling reasons why this cannot be the case:

First, nowhere in the OT does the verb yada have the nuance of “abuse” or “violate”. Second, the OT uses unmistakable language to relate rape incidents. Thus the Shechemites “seized” and “lay with” and “humbled” Dinah (Gen. 34:2). Amnon “forced” and “lay with” his half-sister Tamar (2 Sam. 13:14). Similarly, the biblical laws about rape also use these terms: “seize,” “lie with” (Deut. 22:25-27). Third, this interpretation forces one meaning on “know” in v. 5 (i.e. “abuse”) but a different meaning on ‘know’ three verses later (i.e. “have intercourse with”), for it is unlikely that Lot is saying: “I have two daughters who have never been abused.” Fourth, such an interpretation forces these incredible words in Lot’s mouth: “Do not rape my visitors. Here are my daughters, both virgins – rape them!”

He concludes, “Clearly, then, the incident frowns on homosexual relations for whatever reason.” The revisionist account of this story may be appealing to some, but it is not one that can be derived from proper exegesis or hermeneutics. As Hamilton puts it, this “interpretation can only be evaluated as wild and fanciful.”

The mainstream understanding of this text has always seen homosexuality as being clearly in view. As Robert Gagnon reminds us, “the two most prominent Jewish writers of the first century C.E., Philo and Josephus, interpreted Gen. 19:4-11 to refer explicitly to homosexual acts. . . . For Philo and Josephus homosexual conduct was merely the most outrageous example of a much wider range of sinful excess.”

Thomas Schreiner notes how not only the biblical testimony is clear as to the nature of their sin, but so too are the extra-biblical references to Sodom and Gomorrah. For example, he too cites writers such as Josephus and Philo, and notes various writings, such as Testament of Naphtali, Testament of Levi, and Jubilees.

All up we have a clear understanding of what the chief sin of Sodom and the other cities was all about. Trying to pretend it had nothing to do with homosexuality is simply a blatant case of Scripture twisting to push an ideology and an agenda which is completely at odds with the biblical witness.

Of course to make this case is not to claim that Sodom was not plagued with many other sins. It was wicked for all sorts of reasons. As Fortson and Grams put it in their recent volume, Unchanging Witness: The Consistent Christian Teaching on Homosexuality in Scripture and Tradition:

Some try to reduce Sodom’s sin to a single transgression, such as gang rape or inhospitality. Such suggestions beg credibility in vain. If gang rape is the focus of the story, why does Lot offer his daughters to the mob? If inhospitality is the issue, why is Gomorrah also destroyed? If pairing with angels is the issue (though the men of the city were unaware their visitors were angelic), why is Sodom accused of being extremely sinful before the angels appear? Certainly other sins contributed to Sodom’s sinfulness, but the sin of homosexual practice should not be ignored. Indeed, the men’s homosexual behavior illustrated just how depraved Sodom was.

So next time someone tries to tell you that Sodom has nothing to do with homosexuality, you know you have a radical revisionist on your hands who prefers to twist Scripture to his own – often perverted – ends.