As anti-Christian bigotry and persecution ramps up in the West, there will be more and more reasons why Christians will be targeted. Some will be good reasons and some will be bad reasons. Let me explain. Sometimes Christians get into trouble because they have brought it upon themselves.

If a Christian is caught stealing, killing or whatever, and his name – and church – is splashed all over the media, he discredits his faith and he deserves his just punishment. We read about this in 1 Peter 2:20: “But how is it to your credit if you receive a beating for doing wrong and endure it? But if you suffer for doing good and you endure it, this is commendable before God.”

And we find more on this in 1 Peter 2:12: “Live such good lives among the pagans that, though they accuse you of doing wrong, they may see your good deeds and glorify God on the day he visits.” And again, 3:16-17: “keeping a clear conscience, so that those who speak maliciously against your good behavior in Christ may be ashamed of their slander. For it is better, if it is God’s will, to suffer for doing good than for doing evil.”

These various texts make it clear that we are to live lives of integrity. Being punished for doing what is wrong will not bring glory to God. But if we suffer for doing what is right, then God is still glorified and our witness is still intact. That should be the aim of the believer: living lives which are above reproach before the watching world. 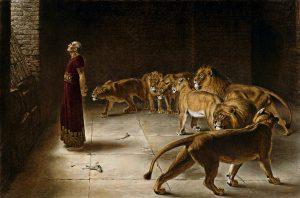 I raise all this because I just read about this very thing happening with Daniel. He lived such an exemplary life that his many enemies had a hard time trying to pin something on him. They could not accuse him of being dishonest because he was not dishonest.

They could not accuse him of being corrupt because he was not corrupt. So to discredit him and attack him, they had to find something else to bring against him. Let me look at this story in some more detail. Most folks know a little bit at least about Daniel.

Most people know about his time in the lions’ den, and his amazing escape from it. But they may not know why he was thrown in there in the first place. Well, Daniel 6:1-5 tells us all about why he had to endure this frightful fate. It says:

It pleased Darius to appoint 120 satraps to rule throughout the kingdom, with three administrators over them, one of whom was Daniel. The satraps were made accountable to them so that the king might not suffer loss. Now Daniel so distinguished himself among the administrators and the satraps by his exceptional qualities that the king planned to set him over the whole kingdom. At this, the administrators and the satraps tried to find grounds for charges against Daniel in his conduct of government affairs, but they were unable to do so. They could find no corruption in him, because he was trustworthy and neither corrupt nor negligent. Finally these men said, “We will never find any basis for charges against this man Daniel unless it has something to do with the law of his God.”

Note what it says: his enemies “tried to find grounds for charges against Daniel in his conduct of government affairs, but they were unable to do so. They could find no corruption in him, because he was trustworthy and neither corrupt nor negligent.”

He was of such sound character and he lived such a righteous life that they could not find anything to accuse him about. So they had to try to find something having to do with “the law of his God.” And that they did, as we read about in verses 6-9:

So these administrators and satraps went as a group to the king and said: “May King Darius live forever! The royal administrators, prefects, satraps, advisers and governors have all agreed that the king should issue an edict and enforce the decree that anyone who prays to any god or human being during the next thirty days, except to you, Your Majesty, shall be thrown into the lions’ den. Now, Your Majesty, issue the decree and put it in writing so that it cannot be altered—in accordance with the law of the Medes and Persians, which cannot be repealed.” So King Darius put the decree in writing.

That is how Daniel got into trouble. He of course insisted on staying completely loyal to the one true God, and he kept praying to him three times a day. For that, he was tossed into the lions’ den. And the rest is indeed history. A major truth found in this passage is how God is able to save those who are his.

But let me focus on a few other lessons here. The importance of godly character and personal integrity is also a key issue found in this story. We all must put a premium on living lives that reflect our Lord – so much so that non-Christian detractors cannot find anything about us that the mud will stick to.

However there is yet another important lesson here I wish to stress. As days grow darker in the West, and the enemies of Christ and Christians become further emboldened to silence the faith and keep us from having a witness to the world, if they cannot get us on trumped up charges dealing with our character, they will seek to get us in trouble with human law versus God’s law.

That is, they will increasingly push for laws to be passed which will directly violate the conscience of the Christian – especially in terms of being able to freely preach the gospel or to uphold basic biblical values in the public arena.

Thus we are getting a raft of anti-vilification laws, anti-discrimination laws and the like, all designed to silence Christians and sideline their public presence. And the current wars over the meaning and purpose of marriage is a clear case in point.

Wherever homosexual marriage has been legalised, direct attacks on Christian witness have taken place. Religious freedoms have been greatly curtailed as Christians find themselves at war with the state and its laws. When push comes to shove, we may be forced to say “No” to such ungodly laws.

As Stephen Miller comments regarding Daniel 6:

Daniel deliberately defied the law of the land. . . . There may be times when the law of the land and the law of God come into conflict. Corrie ten Boom broke the law of Germany when she hid Jews from the Nazis during World War II, but she would have broken a higher law had she not tried to prevent the murder of innocents. Today Christians are being called upon to make difficult ethical choices. As the world becomes more and more secular (and sinful), believers will increasingly find themselves taking stands that are unpopular and positions that may even violate the law of the land.

John Lennox wrote an entire book about Daniel called Against the Flow (Monarch, 2015). His subtitle is important here: “The Inspiration of Daniel in an Age of Relativism.” He discusses the events covered in Daniel 6 and notes how the enemies of Daniel focused on the law of his God. They were “well aware of his allegiance to God.” He continues:

Again, this is impressive. As a student Daniel had decided that he would not keep his head beneath the parapet, reluctant to witness to his faith in case it would disadvantage him. The satraps knew what he believed and could see that it had no negative effect on the quality of his work.
This is a challenge to all of us. There is great pressure in the contemporary (Western) world for the privatization of the expression of religious belief – if not for its outright abolition. It is a widespread conviction that naturalism is the default belief system; and, ironically, Christian theism has no place in the very academies that it founded in the first place! Daniel was prepared to swim against the flow. Are we?

Good question – are we? And this pressure to conform and compromise can arise in many ways. Just the other day I had someone say he wanted me to take down an old comment of his that he had posted on my website, which stood up for biblical truth. He said he is wanting to get a new job and he does not want what he said to make things difficult for him.

Given how very important God’s institutions of marriage and family are, it is time these cowardly and compromised Christians either take a stand for Christ and biblical values, or admit that they are really faux Christians. Things are that serious here.

I decided long ago that I would be a Daniel – no matter what. What about you?

21 Replies to “Christian Persecution: Will You Go Against the Flow?”