If you ever thought that being a hyper-sexed playboy, surrounded by kazillions of hot babes who drool all over you your whole life, while living in an unending self-centred adolescence was the way to go, well, you had no better recent example of this than Hugh Hefner, who has just passed away.

The 91-year-old has no more chicky babes hanging on his arms. He has no more fake blonds with boob jobs swarming all over him pretending they are mad about him. He has no more fancy mansions and lifestyle of the rich and famous. All of that is now gone. 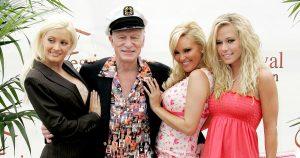 And compared to eternity, his 70 or so years of decadence and dalliance, sleaze and smut were but a puff of smoke. Here one day, gone the next. What seemed like such a long time is now little more than a blink of an eye. Even Hef was not invincible.

The details of his life are well-enough known not to linger much over here. He was born in Chicago in 1926, and his parents were strict Methodists. It seems that this spiritual heritage did not last very long with him. (And we have to ask how strict they were, given the fact that his mother loaned him $1,000 to establish his magazine!)

While he was away in the army, his wife cheated on him. Hefner said that it was “the most devastating moment of my life.” It was in 1953 that what he is now so famous – or infamous – for began: the first Playboy magazine, including nude photos of Marilyn Monroe. He was of course greatly influenced by another sexual radical and libertine, Alfred Kinsey.

As Dr Judith Reisman reminds us, “Hugh Hefner has described in the first issue of Playboy how he drew inspiration from Kinsey’s sex research…. He was particularly dazzled by Kinsey.” I have written about this rather despicable individual elsewhere:

So for the next half century plus he declared war on religion, on morality, on family, on all that has made the West great. Sensuality, sleaze and sexual licence were his passions, as well as agitating for various left-wing causes. He claims he slept with over 2000 women. Calling him a dirty old man would not be amiss.

And he was deliberate and defiant in his push to sexualise society and destroy moral values. As he cheerily said in 1992: “[I’m most proud] that I changed attitudes towards sex. That nice people can live together now. That I decontaminated the notion of premarital sex. That gives me great satisfaction.”

Simply speaking about the man and what he was so proud of his whole life borders on the salacious and the sensational. But the simple point is this: his long life of lust, licence and libertarianism has now come to an abrupt end. As mentioned, all the blondes and breasts and playthings and parties are no more.

Now he has all of eternity to face. I do not know what his last days were like. Unless some sort of death-bed conversion took place, he will spend eternity apart from the God who created him, who loved him, and died on the cross for him. What a wasted life.

At this point let me pre-empt a small handful of critics who will accuse me of speaking ill of the dead, or not allowing proper time before I write about the guy. Nonsense. Already there are many hundreds of obituaries and eulogies out on him, with many thousands more to come in the days and weeks ahead.

And already – as expected – far too many of these are hagiographies. They are painting him as some sort of hero, trailblazer, liberator, and even a saint. They will praise him and the sexual revolution he helped to create. They will glamourise him and idolise him, just as they did Kinsey.

I will not do so. In my books what he did was to cause incalculable damage. He has helped to corrupt and destroy millions of lives, and lead countless souls into a lost eternity. That is no small thing. Of course had Hef not done all this, others would have done so. Thus he was not alone in this, but he was one of the major players in it.

But his negative impact will sadly extend for years on end beyond his death. And again, the critics – even of the Christian variety – can ease up here. The truth is, while he was still alive I often would pray for him. My prayers were rather simple, as they are for others who are so powerful and influential like him.

I prayed that God would either improve him or remove him. Either he needed to become a Christian by turning from his sins and coming to Christ in faith and repentance, or he needed to somehow be taken out of the way – figuratively or literally. Well, he has now been removed by his Maker and his Judge.

Many concerned folks may well have asked why this did not happen sooner. Why was he allowed to live for so long and cause so much damage? I do not know the answer to that question. His nefarious legacy lives on, but he does not – at least on this earth. As I say, he now has to face the music.

His “dream” life is well and truly over. Now he has to face the harsh music of reality, after living for so many decades in a fantasy world and a land of make-believe. Few people have been able to live a life such as he did. And it is a good thing too. It is a one-way ticket to a lost eternity.

As mentioned, if he had some sort of conversion in his final days, I for one am not aware of it. So a life of hedonism, selfishness and unbridled sexuality is now over. Now the real deal begins. All these years of decadence and defiance to the living God are over. Now the real part of life begins.

Let his life serve as a warning to us all. And let the lessons of the destructive sexual revolution sink in. As Mark Steyn put it in After America:

The wreckage is impressive. The Sexual Revolution was well-named: it was a revolt not just against sexual norms but against the institutions and values they supported; it was part of an assault against any alternatives to government, civic or moral. Utopianism, writes the philosopher Roger Scruton, is ‘not in the business of perfecting the world’ but only of demolishing it: ‘The ideal is constructed in order to destroy the actual.’ Who needs families, or marriage, or morality? Who needs nations, especially nations with borders? We’ll take a jackhammer to the foundations of functioning society and proclaim paradise in the ruins.

Elsewhere I mentioned that I wonder if and when kiss and tell books will start to appear by his former sex objects, telling of all the bad experiences they had with him. Moments afterwards I came upon this: it seems that some have already been coming out with such books:
nypost.com/2015/06/21/holly-madison-reveals-hell-with-hef-in-playboy-mansion/

Hefner was one messed-up dude – big time! Let me offer just one quote from the above article:

For lack of anything better to do, Madison decided to clear out Hef’s bedroom and organize his massive collection of scrapbooks and VHS tapes. Her worst discovery at the mansion, she says, was a tape labeled “Girl and Dog.” “My stomach turned,” she says. “I was like, ‘What the hell is this?’”

23 Replies to “The Dark Legacy of Hugh Hefner”