So who is not in favour of love? Such a pleasant word. And what about equality? That is another beautiful term. But of course for language to be of any use, words must have precise and well-agreed upon definitions. Otherwise real communication becomes impossible.

Apple pie words like love and equality must be teased out and carefully explained, or else they end up meaning anything and everything. In which case they end up meaning nothing. And that is exactly what has happened in the homosexuality debate. These two words especially are thrown out repeatedly, but they mean something far different than what you and I mean by them.

The radicals on the left love to twist and distort these terms. They know full well that social engineering is always preceded by verbal engineering. Change the language and you can change the culture. The rainbow activists have been especially good at this over the years. 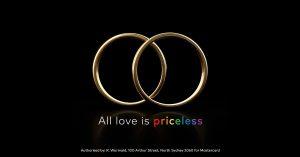 And so too have their various supporters and enablers. The corporate world is really into this big time. The number of big businesses and corporations that have jumped on board the homosexual bandwagon seems to be never-ending. They are all chasing hard after the pink dollar.

This is rather odd for several reasons however. While homosexuals have much higher disposable income than most other folks, there just are not that many of them. And by siding with the rainbow militants, these corporations risk alienating the bulk of their mainstream customers.

Just today another prime example of all this appeared. Now Mastercard has gotten into the homosexual marriage debate. They have just posted this on their Facebook page: “At Mastercard equality is at our very core & we believe it to be a fundamental human right. We consider all love to be equal and we proudly support marriage equality.”

Oh good grief. More weasel words and more appalling propaganda. This is so bad that immediately upon seeing this I shot off a quick response under their post: “Oh do you really? So if three men are in love, they should marry? A father daughter loving relationship should be given legal rights to marry? A bisexual should be allowed to marry one person from each gender? Give me a break MC. Remind me never to do business with you radical social engineers.”

All this could be expanded on in great detail. Come to think of it, I already have! In books and articles I have documented countless cases of this very thing now happening, because other sexual radicals have been emboldened by the homosexual marriage campaign.

If two men can marry, then why not three or four or five? If marriage is simply about “love” – whatever that means – then polyamory (group love) is of course fully acceptable as well. And this is already being called for big time. So too are calls for “intergenerational love” (a euphemism for paedophilia).

As I have documented so often already, the slippery slope is alive and well, and people have been demanding the right to “marry” whoever or whatever they want. Thus we already have had cases of “throuples” (threesomes) marrying; incestuous “love” being promoted; love with pets, and even love with objects.

For heaps of examples of this and documentation on it, see chapter 3 of my 2014 book Dangerous Relations. And what I provide there is only a small sampling of the evidence. Once you redefine marriage out of existence, then anything goes.

There can be no limits once marriage is destroyed. Any combination becomes possible, and anyone who opposes such radical changes will cop the usual abuse: bigot, hater, you-name-it-phobe, etc. After all, love and equality are the only things that matter here – regardless of how completely flexible and vacuous the terms have become.

Let me get back to Mastercard and look at this in a bit more detail. In addition to being open to all forms of “love,” MC must also start putting its money where its mouth is when it comes to equality. Let’s see this played out in the real world of hard finance.

Since when have credit card companies, banks and financial institutions ever cared about equality? As far as I can tell, they never have! Just think about this for a moment. If a homeless person with zero credit rating who is also a drug addict and wanted by the police came to MC and applied for a credit card, what do you think his chances will be of getting one?

If a millionaire in a $2000 Italian suit waltzes into a MC office, parking his $250,000 Jaguar just outside for all to see, asking for a credit card, what do you think his chances will be? Duh. Of course MC discriminates every single day by NOT treating people equally.

It would go out of business today if it tried! Equality has absolutely nothing to do with MC or any other big business. Their bottom line is always about maximising their profit margin. They do not give a rip about equality. So they can spare us this baloney about equality being at their very core.

And let me take this just a bit further. Does MC really believe in equality? How does it treat its own customers? Does it treat those who promptly and regularly repay their borrowed money the same way it treats those who refuse to pay, are late in paying, or are serial recalcitrants when it comes to repaying?

Um, I don’t think so. If it really believed in equality it would charge everyone a late fee, whether they have paid back the money on time or not. Or, they would charge no one a late fee, and reward negligent and delinquent customers just as much as faithful and responsible customers.

After all, love is love, right MC? Love is all about equality right? So as your core values, why don’t you start treating all of your customers equally for a change? Why all this unjust and bigoted discrimination? Why keep treating people so very unequally?

Oh yeah, that’s right: they are a business and they want to make money – lots of money. Thus they must treat people unequally to get the maximum amount of profit. They are intellectual frauds in other words when they waffle on about core values like love and equality.

They don’t believe in it for a moment. It is time to call these businesses out. And it may be time for some of you to take your business elsewhere. Why give your hard-earned money to such radical social engineers? Find companies that more squarely line up with your own values and beliefs.

Oh, and by the way Mastercard: since you claim that “all love is priceless,” let me take you up on that. I would like to get a credit card from you with no limits on how much I can spend, and of course with no need to pay back anything. You can’t put a price on love now can you?

Update. Well that did not take long! They have already pulled my comment in the name of love and equality! Some are more equal than others it seems! See here for what remains of the debate: https://www.facebook.com/MastercardAU/posts/1436688253117034

23 Replies to “Love-Smove, and Other Nonsense”