Life in this world is filled with tears. And if this life was all there was, then this would be terribly tragic indeed. But the Christian believes there is much more than this life, and that one day all tears will be wiped away. But in the meantime, the suffering, heartbreak and hardship seems relentless.

Tragedies and horrible events seem to be a constant in this world. They can occur on a massive scale or on a small scale. Entire people groups can go through horrific suffering, or it can be on a very lonely and personal level. As an indication of great corporate suffering, let me highlight just two recent articles about one suffering people.

Both spoke of the horrible suffering the Ukrainians had to endure under godless Communism, especially in the 1930s, as well as under the Nazis in the 40s. Such largescale suffering and misery is simply hard to comprehend. As to Stalin’s devilry, we had famine created by the Communists as an instrument of genocide.

Let me offer just one quote from one article – a book review actually – discussing what went on then:

In 1933 my aunt Lenina Bibikova was eight years old. She lived in Kharkov, Ukraine. Every morning a polished black Packard automobile would draw up to the door of the handsome pre-revolutionary mansion her family shared with other senior Party cadres to take her father to his job as Party boss at the Kharkov Tractor Factory. When he returned in the evening her father would be carrying bulging packets of sausages and meat from the factory canteen. Lenina did not remember wanting for anything.
Yet in reality Kharkov, like all Ukraine’s cities in that terrible year, was an island of plenty in a sea of starvation. All over Ukraine millions of peasants were dying of hunger in a massive, man-made famine deliberately unleashed by the Soviet state. As Anne Applebaum chronicles in her wrenching, vivid and brilliant account of the Holodomor — literally, the ‘hunger-death’ — famine had become the main weapon of a war unleashed by Stalin on both the reactionary peasant class and on Ukrainian national identity itself.
During the famine years those peasants who managed to crawl to Ukraine’s cities, bellies bloated from hunger, were rounded up by special trucks that patrolled at night on secret orders from the municipal authorities to pick up the living and the dead. By morning there was no trace, for those who chose not to see, of the horror which was unfolding all around. 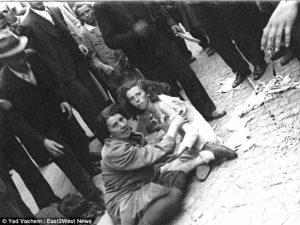 Deliverance was certainly not forthcoming at the hands of the Nazis. The horror continued. One news report from last year describes the wretched reality Jews especially faced back then:

Seventy years on from the end of the Second World War the full, shocking scale of the Nazi-inspired Holocaust in Ukraine is finally being revealed – thanks to pioneering work by a French Catholic priest to research the truth of the industrial-scale killing.
Around 2,000 mass graves of Jewish victims have been located where men, women and children were shot and buried by the Germans and their collaborators. But there may be up to 6,000 more sites to uncover, with victims of this ‘Holocaust of bullets’ – so called because unlike in Poland and Germany where gas chambers were used as the means of slaughter – here most were summarily shot and buried nearby.
In many cases, the Jews were ordered to dig pits and then to strip naked before they were mown down by their murderers. Some were buried in the unmarked plots while still alive.
Blood oozed through the soil at sites of these graves, according to accounts assiduously collected by French Catholic priest, Father Patrick Desbois, who began his search by seeking to trace his grandfather’s experience as a prisoner of war held in a concentration camp by the Nazis in Ukraine during the Second World War.
He uncovered accounts of how Jews were killed by the Nazis ‘for fun’, or ‘out of anger, boredom, drunkenness’, or ‘to rape the girls’. Yet the Soviet Union, for its own motives, obscured the full scale of the Holocaust on its own territory.
Leading historian Mikhail Tyaglyy told MailOnline the number of Jewish victims in Ukraine is between 1.4million and 1.6million, significantly higher than the oft-quoted figure of around one million.
The priest’s search took him to four sites around Rava Ruska, close to the Ukrainian border with Poland, where 15,000 Jews were slain, and also the site of a Nazi camp where his grandfather Claudius Desbois had been held as a prisoner of war.
Gradually, elderly locals who had kept quiet all their lives – mainly under Soviet rule – opened up to him, as hundreds more did in many other villages and towns in Ukraine.
One account from Rava Ruska was of a Nazi officer who spotted a young Jewish woman running out of the ghetto to buy butter at the market. He ordered her to be stripped naked, and demanded the trader smear her with the butter after which he decreed her beaten to death with sticks.
In another case he recounted how ‘an unspeakably cruel German soldier grabbed a Jewish woman’s child from her’. He added: ‘He was barely two years old, and he took him and banged his head repeatedly against the wall… The child died in pools of blood in front of the parent’s eyes.’

The evils endured and the sufferings underwent are just unimaginable for most of us today. But smaller scale hardship and suffering is all around us. We all know of this personally, but let me remind you of just one story of one famous musician and his grief.

I just listened to a recent performance by this noted performer while on an airplane flight. It was surprising to learn he is now 72, but still more or less going strong. I refer to Eric Clapton, who most know of, either through the Yardbirds, or Cream, or Blind Faith, or Derek and the Dominos, or as a solo star, etc.

The guitarist and singer has had quite a career. But many of you would know of one tragedy he had to go through back in March of 1991. When he was away, his four-year-old son Conor was at a friend’s New York apartment. Somehow, he fell from a window on the 53rd-floor, and of course died.

Many know of this because Eric wrote a song about this the next year, “Tears in Heaven”. It is a very moving and beautiful song, but a sad one as well, since he even asks whether he will one day see his son:

You can watch/listen here: www.youtube.com/watch?v=JxPj3GAYYZ0

Here he questions whether he himself belongs in heaven. Obviously, I know nothing of his son’s spiritual condition before he died, and I do not know much about Eric’s either. If he ever became a genuine Christian I just do not know, and sooner or later he too will pass on, and he will then meet his maker.

My purpose here is not to focus on the spiritual state of one very well-known rock star. It is to remind us that on both a large scale and on a small scale level, suffering and heartbreak is all around us. But for the believer, it is thankfully not going to last forever.

So let me return to what I first spoke about: our tears being wiped away. Consider that for a moment. It comes from Revelation 21 which speaks of a new heaven and a new earth. At this time it is not just that our tears will be no more, but God himself will actually wipe them away. See what we find in verses 2-4:

I saw the Holy City, the new Jerusalem, coming down out of heaven from God, prepared as a bride beautifully dressed for her husband. And I heard a loud voice from the throne saying, “Look! God’s dwelling place is now among the people, and he will dwell with them. They will be his people, and God himself will be with them and be their God. ‘He will wipe every tear from their eyes. There will be no more death’ or mourning or crying or pain, for the old order of things has passed away.”

On this mountain the Lord Almighty will prepare
a feast of rich food for all peoples,
a banquet of aged wine—
the best of meats and the finest of wines.
On this mountain he will destroy
the shroud that enfolds all peoples,
the sheet that covers all nations;
he will swallow up death forever.
The Sovereign Lord will wipe away the tears
from all faces;
he will remove his people’s disgrace
from all the earth.

We may not know a lot about what life will be like for the Christians, but we do know the answer to the question asked in my title, and in Eric’s song. There will be no tears in heaven, because God himself will wipe them away. Those are some of the most precious words any believer can know and count on.

Yes the pain, grief, heartache and tribulations of this life can seem overwhelming at times. But they are temporary, and one day they will be no more. Christians, never forget this vital biblical truth, no matter how horrible things can get in this life.

And the reason why he wipes our tears away is – at least in part – because he knows all about suffering. Our God is a God of tears. As Philip Yancey once wrote: “Jesus never attempted a philosophical answer to the problem of pain, yet he did give an existential answer. Although I cannot learn from him why a particular bad thing occurs, I can learn how God feels about it. Jesus gives God a face, and that face is streaked with tears.”

Or as Peter Kreeft put it in his important 1986 book, Making Sense Out of Suffering:

We began with the mystery, not just of suffering but of suffering in a world supposedly created by a loving God. How to get God off the hook? God’s answer is Jesus. Jesus is not God off the hook but God on the hook. That’s why the doctrine of the divinity of Christ is crucial: If that is not God there on the cross but only a good man, then God is not on the hook, on the cross, in our suffering. And if God is not on the hook, then God is not off the hook. How could he sit there in heaven and ignore our tears?
There is, as we saw, one good reason for not believing in God: evil. And God himself has answered this objection not in words but in deeds and in tears. Jesus is the tears of God.

7 Replies to “Tears in Heaven”